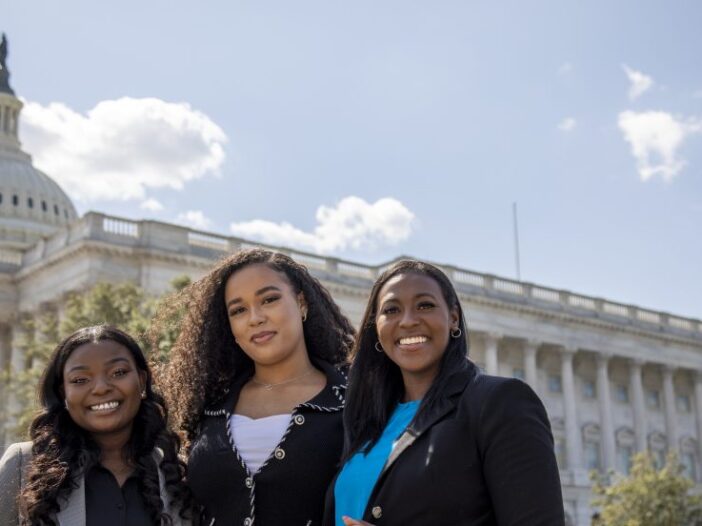 When Odunayo Durojaye (COL ’19, LAW ’22) took her seat at Justice Ketanji Brown Jackson’s confirmation hearings, she recalled a feeling of excitement and inspiration.

“To sit behind Justice Jackson and close enough to see the parting in her sister locks still amazes me,” Durojaye wrote to The Hoya.

Durojaye attended these hearings alongside 10 other Black women enrolled at the Georgetown University Law Center (GULC). These students received invitations to attend from Jade Baker (LAW ’22), president of the Student Bar Association, based on their leadership roles in various organizations across GULC. On April 7, Jackson became the first Black woman appointed to the United States Supreme Court following a 53-47 confirmation from the U.S. Senate.

Achieving the highest appointed judicial spot in the country sets an example for Black women that they can do the same, according to Baker.

“We’ve made it to the vice presidency, we made it to the Senate. We made it to be elected judges and appointed judges, and we’ve earned our way there. We’ve earned it through the people, through democracy, through election. But we never quite could get that elusive appointment, which isn’t necessarily always by merit, or by the people or by democracy,” Baker said in a phone interview with The Hoya.

The field of law has been historically dominated by white men, with Black women serving as fewer than 2% of federal judges in the United States, according to the Pew Research Center.

During the confirmation hearing Jackson was faced with baseless attacks from Republican lawmakers, including from Sen. Josh Hawley (R-Mo.) and Sen. Marsha Blackburn (R-Tenn.), that she had given lighter sentences to people convicted of child pornography and had attempted to let dangerous criminals out of prison.

Additionally during the hearings Sen. Ted Cruz (R-Texas) misconstrued Jackson’s role on the Board of Trustees for Georgetown Day School, a private school located in Washington, D.C., which is known for promoting inclusivity. On the board, Jackson has promoted inclusivity and anti-racism.

Cruz attempted to misconstrue Jackson’s work on the board as evidence that she has supported the implementation of Critical Race Theory in the curricula of the school. Board members, however, are not involved with curriculum decisions of Georgetown Day School. Furthermore, at the hearings Jackson said Critical Race Theory is unrelated to her qualifications as a judge.

Durojaye said Jackson’s composed response to these attacks was powerful and inspiring.

Cheyenne Freely (LAW ’22), another student who Baker selected to attend the historic confirmation, said that the excitement and joy of other observers was infectious.

“It really means everything for black women attending Georgetown Law and across the country to be able to witness such a historical moment,” Freely wrote in an email to The Hoya.

Treanor said the moment showed the importance of representation and hopes her appointment will inspire a greater number of diverse students, particularly Black women, to pursue careers and degrees in law.

The opportunity to attend the hearings was inspirational, according to Lauren Short (LAW ’23).

“The glass ceiling applies differently to black women and her confirmation almost gave permission to black women law students to pursue every opportunity wholeheartedly,” Short wrote to The Hoya.

Conservatives and Republican lawmakers claimed that Jackson benefited from affirmative action because President Joe Biden promised to nominate a Black woman. Jackson is considered one of the most qualified Supreme Court picks in history serving as a Supreme Court clerk, a public defender, a district court judge, a federal appeals judge, and as a member of the US Sentencing Commission.

Durojaye said Jackson’s confirmation to the Supreme Court is a testament to the work of Black women everywhere.

“For so long, institutional racism and the glass ceiling have prevented the success of Black women. But with Justice Jackson being confirmed to the bench, Black women can dream bigger and accomplish anything they want with hard work, faith, and dedication to service,” Durojaye wrote.