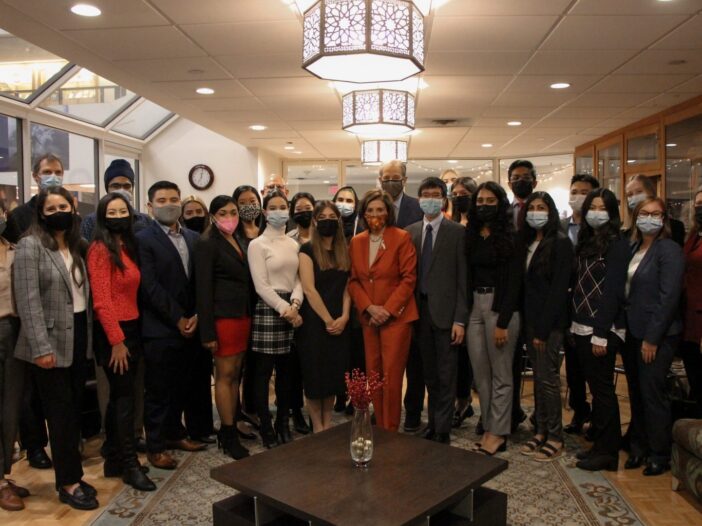 The Paul F. Pelosi Scholars Initiative (PSI) awarded 15 scholarships for the summer of 2023 to Georgetown University School of Foreign Service (SFS) students for their scholastic and extracurricular achievements.

PSI has recognized the work of 10 to 15 SFS sophomores and juniors who are interested in public service. The program pairs students with mentors who are public service professionals, offers skill training and networking seminars and funds summer internships through stipends to help selected scholars find post-graduate opportunities.

The PSI Program Director Elizabeth Boesen said the selection committee weighs a comprehensive set of factors based on the ideals of public service to assess the large number of applicants.

“The interview panel primarily considered students’ commitment to careers in public service, as evidenced by their community service, internships, coursework and their application essays and letter of rec,” Boesen told The Hoya.

The 2023 cohort consists of students from a variety of different backgrounds and areas of study.

Gasdia said he hopes the Pelosi Scholarship will help him further his interest in public service.

“I was not really sure exactly what I was interested in studying or doing with my career, and I still was not even sure if public service broadly defined was what I was interested in,” Gasdia told The Hoya. “But this year, after doing a lot of soul-searching, working at that think tank for the first half of the year and in doing public service work through them, I decided to apply.”

Recipient Sophie Coste (SFS ’24) volunteered at a hospital in Kenya during her gap year in 2020.

“I was able to see a lot of the public policy challenges that governments struggle with just because of their capacity and the money that they have, but I was also able to see how concrete policy solutions can really prevent suffering, deaths and illnesses,” Coste told The Hoya. “That perspective really helped me see the value in public service because it’s more about prevention rather than treatment.”

Sanjana Ranganathan (SFS ’25) worked on a redistricting coalition, as well as an American Legion Auxiliary (ALA) Girls State program, a civic leadership initiative.

Ranganathan said she valued the mentorship component of the PSI program the most when applying, and she is looking forward to learning directly from public service experts about their work experiences.

“My family is primarily engineers, so I do not know anyone who has ever really attempted the public service path other than my peers,” Ranganathan said. “I just am really excited for the opportunity to talk to someone and get advice from someone who has worked in the field and kind of knows a thing or two.”

Fellow cohort member Logan Richman (SFS ’25) is mostly interested in communications, human rights and civil liberties. His prior work as a member of the Free Speech Project and Georgetown Global Consulting sparked his passion for public service.

Richman said he most looks forward to giving back to the Georgetown community through the program.

“Being part of a Pelosi Scholar community is something that I was really interested in because I love having that opportunity to be someone that younger students can come to bounce ideas off of, hear about my experiences and engage with them,” Richman told The Hoya.

Gasdia said he appreciates the program’s institutional support, both in securing internships and helping him connect with peers of similar interests.

“I haven’t finalized exactly what I am gonna be doing, but I am really looking forward to whatever form that takes,” Gasdia said. “But in the meantime, I am just really excited to get to know the other people in my cohort a little bit more and connect with them, talk about similar interests and different interests and really develop those interpersonal connections.”