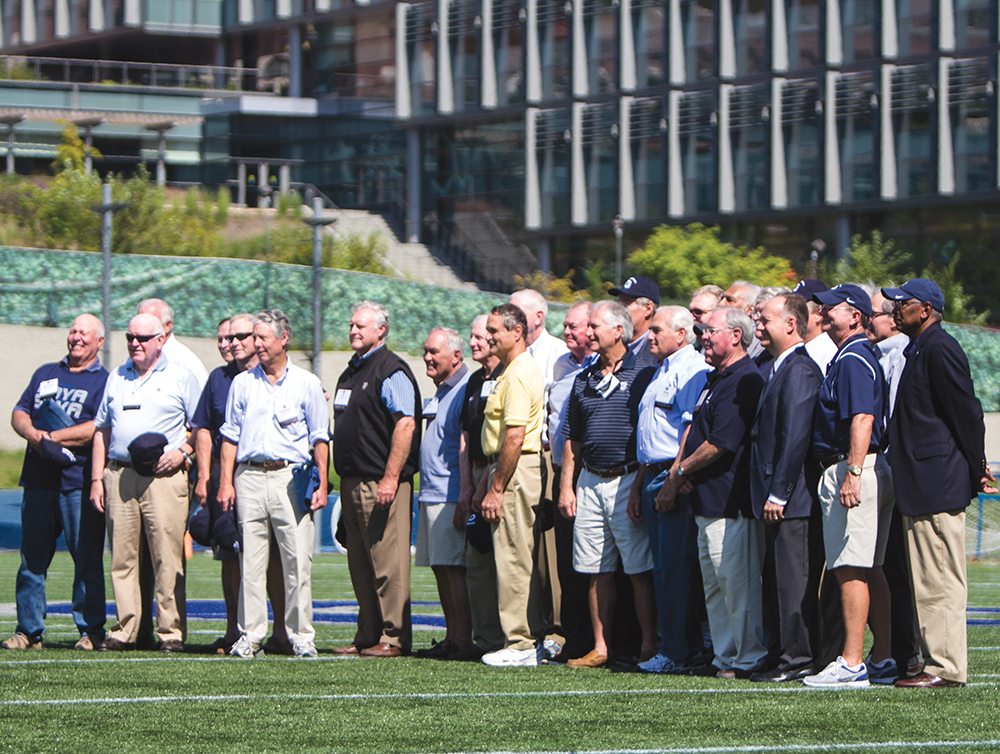 Weekend festivities marked the 50th year of Georgetown football’s return to the Hilltop, with the return of members of the 1964 squad and those responsible for reviving the program.

In 1964, Georgetown played a single November game against New York University, winning 28-6 on homecoming weekend. The game marked a return of the sport to the program after a hiatus following World War II, featuring a team of assorted intramural football players who were ready to put their game on display at a higher level.

The storied history of the program was on display Saturday as team members and supporters of the ’64 team took to the MultiSport Facility, watching this year’s squad play Brown University in a nonconference contest.

At halftime, the former teammates — many of whom were wearing Georgetown football caps to commemorate the 50th anniversary — lined up on the field with University President and former football player John J. DeGioia (CAS ’79, GRD ’95).

With Georgetown leading 7-3 at halftime, the alumni took to the field in front of a nearly full house of Georgetown and Brown supporters on the balmy late-September day. An announcer went down the line, calling out the height, position and hometown of each member of the 1964 team. Then, each member had a chance to wave to the crowd.

“Artificial turf and great fan support,” former quarterback Tony Lauinger (CAS ’67) said when asked about what stands out about the current football program. “We had great fan support when we were here too because we were just getting started. But, this is really exciting to see, and the team is just playing so well. And beating an Ivy League school would be really great.”

Lauinger paused mid-interview to emphatically cheer on the Hoyas as they streamed back onto the field from the Southwest Quad. Members of the ’64 team formed a funnel around the Blue and Gray as they filed through the gates. The Hoyas went on to beat Brown 17-3, which was not only a statement win against an Ivy League school, but also the program’s first win against Brown after five losses.

“I’m impressed; I think their defense is doing a great job; I’m watching their linebackers because that’s what I played, and I think they’re doing a good job,” former defensive captain Steve Langhoff (CAS ’65) said. “These kids are a lot bigger than we were.”

First-year Head Coach Rob Sgarlata commented on the significance of the win.

“It’s a big deal to beat Brown. Coach Estes has been [at Brown for] 23 years — nine as a head coach. He’ll get his 100th win there this year,” Sgarlata said. “That’s a good coaching staff; that’s a well-established program. Honestly, in five years, that’s something I hope that people say about this program.”

The anniversary celebrations continued that night at an award dinner held in O’Donovan Hall. Awards were presented by the Georgetown University Athletic Department to alumni as the history of the program was again put on display.

Former U.S. Army Chief of Staff Gen. George William Casey Jr. (SFS ’70) was awarded the Letterman of Distinction Award in honor of his 41-year career of service. Rory Quirk (CAS ’65) was presented with the Outstanding Service to Georgetown Football award in recognition of his instrumental role in reviving the intercollegiate sport at Georgetown.

“I never expected 50 years ago for it to be anything like this,” Langhoff said. “But it’s really nice to be here. The facility is so much better — needless to say — than we had. The whole thing — we were class football that all of the sudden became intercollegiate.”

Although the Hoyas might soon struggle against other Patriot League schools, which are now using scholarships to recruit athletes, Saturday offered a positive perspective on the progress of the program over the past half-century.

A reminder of the unique history of the program — and a home win — brought Georgetown football back to its roots in every sense.

Excited fans, the return of legendary players, and an unexpected yet deserved win reflected both the past and present of the Blue and Gray.

As encouraging as the 2014 Hoyas looked on Saturday, Langhoff made sure to assert that his 1964 squad will hold a certain record for a long time.

“We may have gone 1-0 that year, but it still makes us the only undefeated team,” Langhoff said.