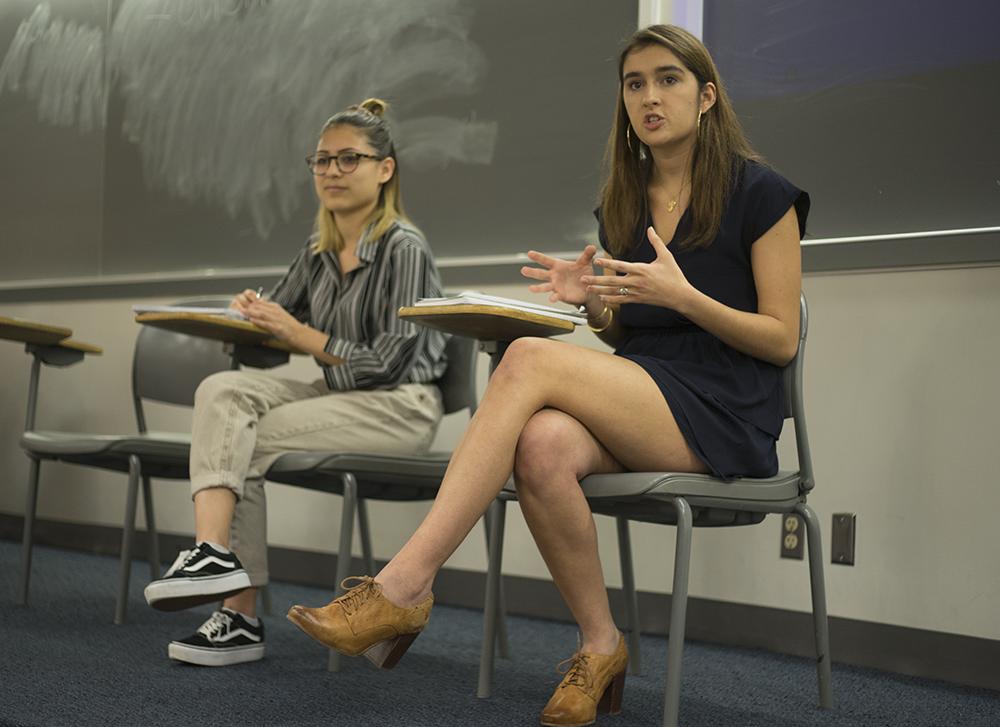 Aleida Olvera (COL ’20) and Roya Wolfe (SFS ’21) opened with their campaigns’ policy priorities and answered questions from campus media outlets including The Hoya, The Georgetown Voice, and The Georgetown Review. Audience members and Twitter users also supplied questions for the candidates. The debate was hosted by the GU Election Commission in the Intercultural Center.

Vice presidential candidate John Dolan (MSB ’20) was not present at the debate. Dolan and his running mate Ryan Zuccala (MSB ’20) instead posted a video on their campaign’s Facebook page answering questions submitted by Georgetown students. In addition, Nicki Gray (NHS ’20) is running a solo presidential campaign.

The candidates stressed the importance of including the voices of underrepresented students in their campaigns and policy choices.

Olvera and Francis plan to apply their own experiences as members of marginalized communities to their platforms to address issues relating to these groups.

“Our identities kind of coincide with a lot of marginalized groups on campus; we know what is feels like to be underrepresented and unheard,” Olvera said. “We want to make sure through our tenure here that students understand that we have been through that experience.”

Wolfe said her ticket seeks to connect university administrators with student leaders already speaking up about the status of marginalized groups on campus.

Olvera and Norman Francis Jr. (COL ’20) are running on a four-part program of transparency, reform, accessibility and progress, or “T.R.A.P.” The candidates’ main initiative is the distribution of a pamphlet detailing academic resources for students to learn about their options for taking pass/fail courses or auditing classes.

Wolfe and Sina Nemazi (COL ’21) plan to focus on four initiatives. These include mandatory training about Title IX for students in the Student Advocacy Office, the creation of a “Zen Den” meditation room in Lauinger Library, distribution of free menstrual products across campus and a reward program for students who use reusable water bottles at dining locations.

Affordability was another theme featured in the debate, with both candidates differing in their response to dealing with tuition hikes.

Along with her running mate, Olvera plans to explore the possibility of freezing tuition for students across their four years at Georgetown, a policy previously implemented at Columbia University and Harvard University.

“We’re not sure how exactly we’re going to tackle that, but that’s an idea that we’re really pushing toward,” Olvera said. “But we do know it is a very difficult situation for students that have raised money and do have specific funds allocated for their time here.”

Wolfe acknowledged that the GUSA executive may not be able to force administrators to make changes in tuition policy and focused on other issues where change can be more feasible.

“We do want to maintain that conversation, to hold that conversation,” said Wolfe. “But I personally think based on what I’ve seen through GUSA, it would be hard to control what the university is doing with tuition.”

The candidates both spoke to their tickets’ views on the proposed referendum that would allow Georgetown students to vote on whether to establish a reconciliation contribution, a fee to collect money for a charitable fund to benefit descendants of the 272 slaves who were sold by the Maryland Society of Jesus in 1838, commonly known as the GU272.

Pushing the GU272 referendum forward would be the team’s first priority should they be elected, according to Olvera.

Wolfe said that she fully supports the referendum and that the university is long overdue to acknowledge its past wrongdoing.

The candidates also addressed questions about how their tickets view the topic of free speech in their platforms. Olvera stressed that student safety should be the first priority in considerations of who should be able to come to speak on campus.

Wolfe emphasized the distinction between speakers coming to campus who cause students to question their beliefs and those who harm marginalized groups with their rhetoric.

The GUSA presidential debate will take place on Tuesday, Feb. 5, in the Healey Family Student Center Great Room at 7 p.m.