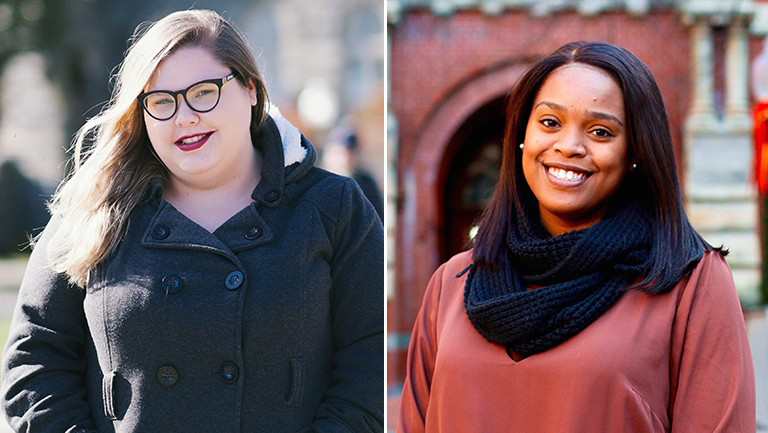 Government majors Amanda Scott (COL ’19) and Shakera Vaughan (COL ’19) were each awarded $30,000 by the Harry S. Truman Scholarship Foundation for their government-related extracurricular activities and community service. The scholarship, awarded to students dedicated to implementing positive change through public service, must be used for graduate education.

Scott plans to use the award for law school, while Vaughn intends to apply hers toward a master’s degree in public administration.

Scott and Vaughan are both members of the Georgetown Scholarship Program, which provides both programmatic and financial assistance to students from low-income families and first-generation college students. Their receipt of the Truman Scholarship marks the second consecutive year in which two Georgetown students received the scholarship.

Scott said that her experience with prejudice as a bisexual woman in Alabama inspired her to pursue a law degree. Scott views a career in law as a way for her to advocate for poor and marginalized communities and push for progressive change, she said.

“I came to be interested in studying law indirectly through my interest in civil rights advocacy,” Scott wrote in an email to The Hoya. “Growing up openly bisexual in Alabama and experiencing prejudice, I became involved in the movement for LGBTQ civil rights and came to see the law as a means to achieve justice for the poor and marginalized communities. I came to see civil rights attorneys as the champions of progressive change.”

Scott said the Truman Scholarship will ultimately enable her to use her law degree to pursue her goal of helping disadvantaged communities.

“Receiving the Truman Scholarship is a life changing opportunity, in the same way being admitted to Georgetown was, because it will give me the resources and network to help me achieve my dreams of going into public service,” Scott wrote.

Scott said she applied to the Truman Scholarship to prove to herself that she is capable and worthy of a prestigious award.

“I’ve gone through a lot in my life to get to this point and to stay here,” Scott said in an April 13 university announcement. “I applied because I wanted to show myself that I am good enough — that people like me are good enough.”

Vaughan grew up in Richmond, Va., and intends to go to graduate school to study public administration next year. Vaughan said she hopes her master’s degree will equip her with skills to implement change in Richmond’s city government.

“Studying public administration will help me to gain the skills in public management and policy analysis, both skills I believe are vital to enact structural change in my city’s local government back home,” Vaughan wrote in an email to The Hoya.

By attending graduate school, Vaughan said she will be able to achieve her goal of addressing income inequality, an issue she believes stems from ineffective policy.

“I know that a lot of poverty and the education gap can be traced back to poor policies and also how they are administered,” Vaughan wrote. “I know I want to spend my life dedicated to fixing that and a graduate degree would bring me one step closer to that. The Truman Scholarship now makes my goal possible.”

Vaughan draws her inspiration to work for policy changes from her community in Richmond, according to the university announcement.

“I am doing all of this for my community back home,” Vaughan said. “Ultimately, it is the city of Richmond that drives me towards my goals.”

Receiving the scholarship is especially meaningful for Vaughan, who now sees graduate school as an attainable goal.

“This scholarship means everything to me, because it makes graduate school an option now,” Vaughan said in the April 13 news release. “It brings tears to my eyes knowing that the people who sat on my panel believed in my vision and wanted to help me accomplish this.”