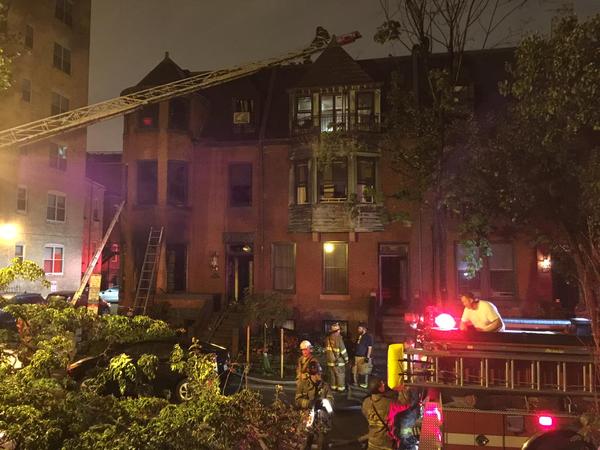 Update 1:12 p.m (June 5, 2015): One Georgetown student, Nina Brekelmans (GRD ’15), was confirmed to have died in the fire. The other victim was a University of Maryland graduate. See full story here: Georgetown Graduate Dies in Dupont Circle Fire.

The identities of the victims, one male and one female, have not yet been released.

The fire, which took place in the 1600 block of Riggs Place at about 2:30 a.m., also injured five people, three of whom were firefighters.

University spokesperson Stacy Kerr said that she could not confirm the deaths of the students at this time.

Washington Post reporter Aaron C. Davis, who graduated Georgetown in 1999, tweeted tonight that Evans said that he does not have confirmation that the two victims are Georgetown students.

Despite reports to the contrary, DC Council member Jack Evans says he has no confirmation two Georgetown students died today in a house fire

Mark Lieberman, a reporter at Current Newspapers, had tweeted during tonight’s ANC2F meeting that a representative from Evans’ office identified the victims as Georgetown students.

A representative from the office of @JackEvansWard2 says two Georgetown students died in a fire at 16th & Riggs this morning.

ANC2F commissioners Charlie Bengel, John Fanning, Pepin Tuma and Jim Lamare wrote in emails to The Hoya that Kimbel identified the victims as Georgetown students during the meeting. The address of the fire falls under the jurisdiction of ANC2B.

Updated 11:29 p.m. The headline has been changed to reflect conflicting reports on confirmation.

Mark Lieberman, a reporter at the Current Newspapers who live-tweeted the meeting, said that Kimbel did not explain where she got the information about the fire’s victims.

“This is outside the ANC but I feel I need to address it,” Kimbel said at the meeting. “Many of you know there was a major fire this morning at 16th and Riggs in a rowhouse. Two people were killed. We’ve been told that they are two Georgetown University students that had rented a third floor.”

Little reaction or discussion followed the announcement. According to Lieberman, Kimbel also discussed a general trend of leasing rowhouses that may not meet standards to unwary tenants, like students.

Thomas Lipinsky (MSB ’11), communications director for the Office of Councilmember Jack Evans, wrote in an email to Lieberman that Kimbel’s statement has not yet been confirmed.

“We do not have any confirmation that the individuals who died in the fire on Riggs Place were Georgetown University students,” Lipinsky wrote. “Sherri, who spoke at the meeting, was speaking from unsubstantial reports from neighbors of the property. DC FEMS, ATF and MPD are investigating the fire and have not provided CM Evans or our office any information about the identity of the victims.”

Lipinsky said that no confirmed information about the identities of the victims has been made available to Evans’ office at this time.

“We have not received any confirmation from D.C. Fire, [the Bureau of Alcohol, Tobacco, Firearms and Explosives], or [the metropolitan police department], who are co-leading the investigation,” Lipinsky told The Hoya. “The comment was made based on some information from neighbors of the property but it has not been confirmed. We regret any sort of confusion or panic that it caused.”

According to Lipinsky, Evans contacted Deputy Mayor for Public Safety Kevin Donahue on Wednesday night, and Donahue did not have any further information about the identities of the victims. Evans’ office does not know when this information will be released.

This post will be updated as more information becomes available.