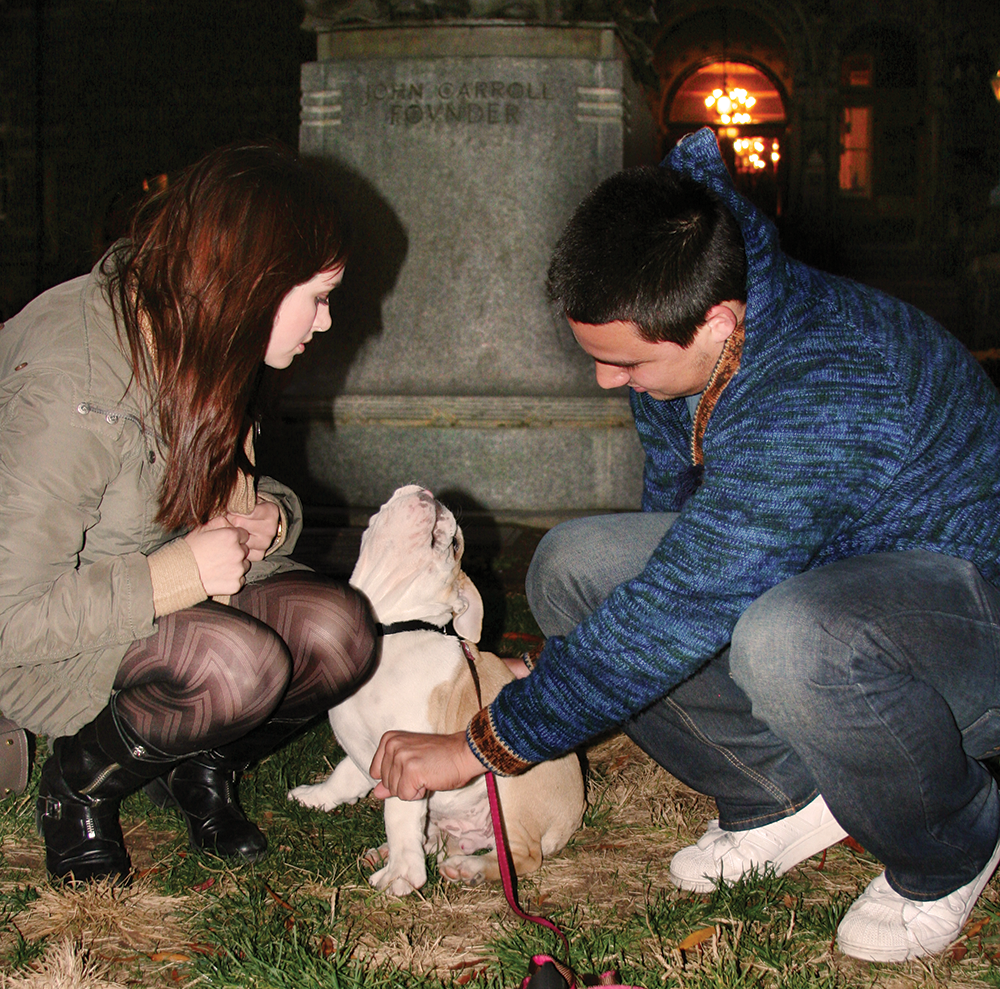 The Bulldog Advisory Committee chose Communications Specialist in the Office of Communications Mc-Kenzie Stough (COL ’13) as the next mascot caretaker Tuesday.

After graduating last year, Stough continued her relationship with Georgetown as an employee and decided to apply for the caretaker position.

“I know they’re looking, clearly, for someone who’s going to be here for a long time. The big priority is that it’s somebody that can commit,” she said. “And this fits in really well with my long-term plans because I’ve wanted to be part of the Georgetown community for a really long time — eventually, I’ll probably go to grad school after he’s totally acclimated and no longer a puppy — and so I think you can expect a pretty big time commitment.”

Stough has considerable experience, having raised three dogs with her family.

“I’ve really had dogs around me since I was about 5 years old, so this is just a really good way to use those strengths with my love for the Georgetown community and kind of get back involved with the students again,” Stough said.

The Jack Crew, now composed of six students, will work with Stough to build a stable environment and family for Jack in his townhouse on 36th Street. Fr. Christopher Steck, S.J., will continue to care for the old Jack in New South.

“We’re so excited to be working with McKenzie now and just kind of establish what’s going to be best for both her and Jack, and just be able to serve the puppy in whatever way we can that’s best for him,” Head of Jack Crew and BAC member Neve Schadler (COL ’15) said.

Stough will take over for Chief Operating Officer for Advancement Paul O’Neill (CAS ’86), who has taken care of the new bulldog since he arrived on campus Oct. 22.

“A lot of [the walking] is going to stay with the Jack Crew. I think the schedule will very much stay the same,” Stough said. “I’m kind of filling in for Paul and being like the dog’s mother at night, and feeding him, and staying with him at night, and making sure that there’s a solid presence with him at all times and somebody that he can really be comfortable with when we start taking him to events and things like that.”

Erika Cohen Derr, the leader of the BAC caretaker search, said Stough will acclimate well to her new role.

“She has a deep commitment to Georgetown’s bulldog mascot tradition. McKenzie will be a great caretaker for Jack and be able to manage his soon-to-be busy schedule. The BAC looks forward to welcoming McKenzie into this important role and the work of the BAC,” Cohen Derr wrote in an email.

“You can see it when she’s with Jack. She knows how to strike that balance,” Jack Crew and BAC member Adam Ramadan (SFS ’14) said. “You can just tell she strikes that balance between how to have fun with him and how to make sure he’s happy, but also not afraid to tell somebody, ‘Please don’t pet him,’ or ‘Don’t pet him like that.’”

As for Jack’s own acclimation, the focus still remains on gradually introducing him to the student environment.

“It’s just a matter of him growing up. So even after a year, he’s still going to need a lot of care and acclimation to large crowds, because being the mascot, he’s a working dog,” Schadler said. “Not only does he need to be acclimated to a new home and a new family and to the walkers but also to this new position that he has, so it will take over a year for that process to happen.”