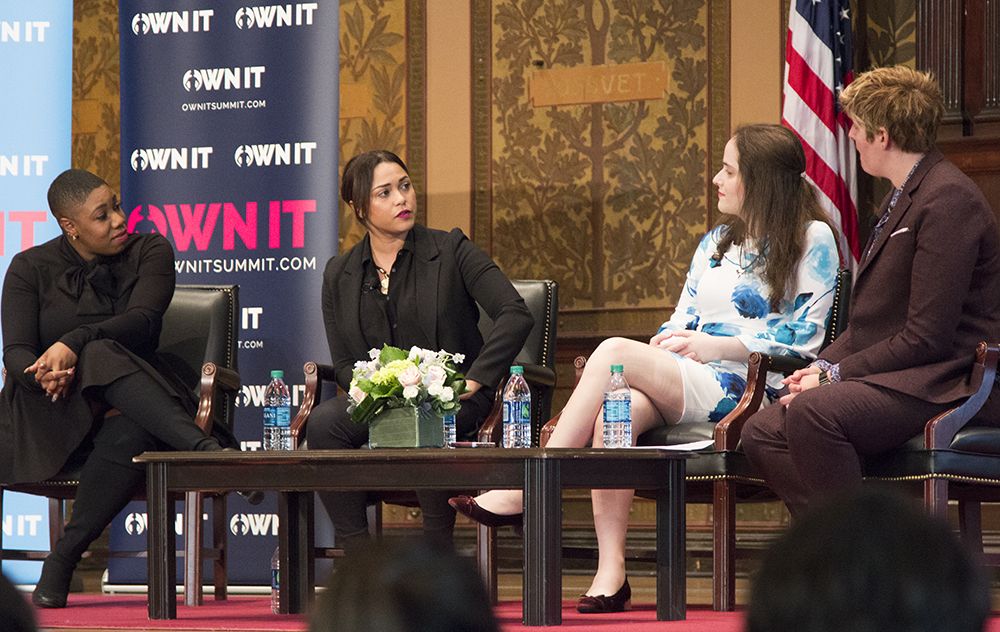 Issues of intersectional identity and the suppression of women’s voices were at the forefront of the OWN IT panel Speak Up or They Won’t Hear You: Women in Male-Dominated Workplaces, which featured four prominent women in media and activism: Monica Raymund, Abby Stein, Symone Sanders and Sally Kohn, who moderated the event.

Raymund is a television actress best known for her roles on CBS’s “The Good Wife” and NBC’s “Chicago Fire”; Stein is a writer and transgender activist; Sanders is a CNN commentator and former national press secretary for the 2016 presidential campaign of Sen. Bernie Sanders (I-Vt.) and Kohn is an LGBTQ activist and CNN commentator.

The panel, the second of three at Sunday’s OWN IT Summit, focused largely on the personal experiences of the panelists in their relationships to gender and racial politics.

Stein was raised in a conservative Hasidic Jewish community in New York and worked as a rabbi in her early adulthood, according to CNN. Asked whether she had ever felt voiceless, Stein spoke about her lightbulb moment at age 20.

Stein also discussed the ability of the media, specifically social media, to silence activists, describing how her use of the hashtag #JewsDemandAction the previous day sparked an anti-Semitic response on her Twitter page.

“All the arguments [were] about all the typical stereotypes of how we’re trying to control the world and how we’re Communists and Bolsheviks. All of that going nonstop,” Stein said. “I’m gonna think twice … next time, before I say anything about my identity, how being queer and Jewish, or being Jewish and an activist, affect me. I was effectively shut down.”

Raymund described her trouble accessing her own voice until she was given the free rein to explore her identity.

“Look, I’m brown, I’m queer, I’m Latina,” Raymund said. “Trying to understand all of those things as my identity was very difficult for me when I was a teenager. I went to school in New York, and that’s where I found a little bit of my voice. So I was lucky, because I had a community, and I had the space. I didn’t understand my power until I was given the space to do that.”

Raymund tied her own experience of empowerment to the outspoken teenage organizers of the  March for Our Lives, the march to protest gun violence that had taken place the previous day.

“When I’m watching these kids march yesterday, for the first time in a while, it feels like there’s hope for the world,” Raymund said.

Sanders discussed the issue of authenticity in professional spaces.

“Do you all know what a ‘work voice’ is? You know this thing,” Sanders asked the audience, raising her voice to a higher pitch, “that you put on to make what you’re saying more palatable, a bit more mainstream, because someone told us that this was more effective in the workplace, or a conference call, or a meeting or in class when you raise your hand?”

Sanders abandoned her “work voice,” she said, in early 2015, when she realized the people around her at work were being their “authentic selves” in the office.

“Finally I said, we’re just gonna show up as Symone today,” Sanders said. “I stopped trying to put up the facade of what I thought was professional, what I thought would work for me in this environment, and be myself.”

Finding her authentic voice was a process, Sanders said, but was worth it.

“The day that I decided to be my authentic self, and to show up as Symone every single place that I went, everything just got better,” Sanders said.