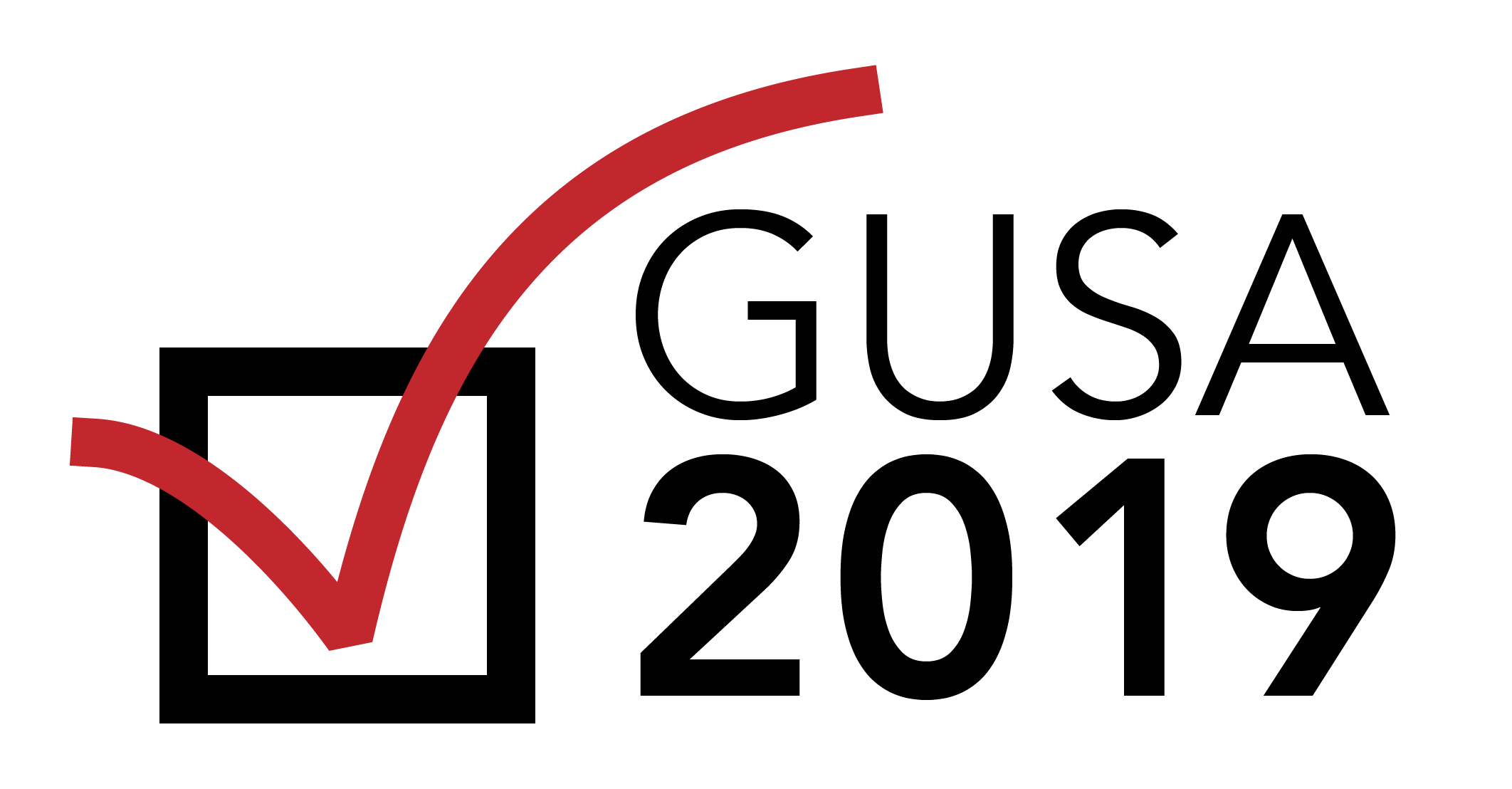 Students Set to Vote for President Amid Declining Trust in GUSA

Of the respondents, 2 percent rated their current trust in GUSA as strong, while 38.9 percent listed their trust in GUSA as weak, according to a door-to-door poll of 615 students conducted by The Hoya on Wednesday evening. 35 percent of respondents said they were uncertain.

Outgoing GUSA President Juan Martinez (SFS ’20) also expressed concerns about how many students will go to the polls. 58 percent of respondents said they planned to vote in today’s election, while 42 percent said they are not planning to vote.

“I’m kind of worried for this vote count, just seeing the enthusiasm or the attention given to these elections,” Martinez said at The Hoya’s post-debate analysis Tuesday. “I’m wondering how many people are going to turn out at the polls, how many people are actually going to vote and how is that going to impact the person who gets elected, or how is that going to give more credence to this movement about abolishing GUSA or maybe just fundamentally restructuring GUSA.”

Overall voter turnout was 39 percent last year and 38 percent in 2017, according to the GUSA Election commission.

In a campaign season dominated by outsider tickets and unprecedented circumstances, candidates are striving to engage students with relevant platforms.

Throughout the campaign season for this year’s Georgetown University Student Association executive election, the four tickets have focused not only on their policies, but also the rules and processes of the race.

In today’s election, the ballots will offer voters the opportunity to rank candidates by order of preference. Unlike the United States’ electoral college voting process, the single transferable voting used by GUSA allows for a form of an instantaneous runoff election.

If no ticket initially wins an absolute majority of first-choice votes, the ticket with the fewest first-choice votes is eliminated and has its votes redistributed according to the second-choices indicated on those ballots. Through this process, the instant runoff election continues until one ticket has the support of 50 percent of all voters. In general, few tickets earn a majority in the first round and most GUSA elections last until the second or third round.

Nicki Gray (NHS ’20) leads by a 6.6 point margin for Georgetown University Student Association president, according to a door-to-door poll of 615 students conducted by The Hoya on Wednesday evening. The election is set for Friday, Feb. 8.

The poll’s narrow margin suggests no candidate will receive a majority of votes in the first round of voting. If no ticket receives an outright majority in the first round, an instant runoff is conducted between the top performing tickets, per GUSA’s single transferable vote system. In this ranked choice system, the ticket with the lowest vote total is eliminated, and their votes are redistributed to the remaining candidates based on voters’ indicated second preferences until one ticket receives a majority.

GUSA is somewhat relevant, according to 54 percent of respondents. 40.3 percent said GUSA is not at all relevant, and 5.7 responded it was very relevant.

Aleida Olvera (COL ’20) and Roya Wolfe (SFS ’21) opened with their campaigns’ policy priorities and answered questions from campus media outlets including The Hoya, The Georgetown Voice, and The Georgetown Review. Audience members and Twitter users also supplied questions for the candidates. The debate was hosted by the GU Election Commission in the Intercultural Center.

Vice presidential candidate John Dolan (MSB ’20) was not present at the debate. Dolan and his running mate Ryan Zuccala (MSB ’20) instead posted a video on their campaign’s Facebook page answering questions submitted by Georgetown students. In addition, Nicki Gray (NHS ’20) is running a solo presidential campaign.

Long before launching their bid for the Georgetown University Student Association executive, Norman Francis Jr. (COL ’20) and Aleida Olvera (COL ’20) bonded in the first few weeks of their freshman year, after Olvera witnessed Francis attempt to climb a doorway in Village C West.

Since freshman year, the two have remained close friends, making the decision to expand their personal relationship into a political one last week. Francis and Olvera’s campaign is centered on the themes of transparency, reform, accessibility and progress — or “T.R.A.P.,” as the pair have labelled it.

Though they had chosen to run the day before the final executive election info session, Francis said his ability to work well under deadlines serves as previous experience working under a tight timeline.

“I decided to run last week,” Francis said Sunday in an interview with The Hoya. “I’m a Georgetown student, I like living life under pressure. On one Friday, I finished three finals — I wrote 22 pages from three different finals — so I like working under pressure.”

Gray is running for the GUSA executive without a vice presidential candidate after her former running mate, Sam Appel (COL ’20), removed his name from the executive ballot Monday night.

Despite losing her vice presidential candidate, Gray highlighted the ongoing support from her campaign staff.

“I’m running alone in the sense that my name is the only one on the ballot, but I’m by no means running alone,” Gray said Wednesday in an interview with The Hoya. “I have an amazing team to support me, an amazing group of people that I’ve been learning from throughout this entire process, from the time I decided to run.”

Nemazi, Wolfe Hope to ‘Run for All’

Sina Nemazi (COL ’21) and Roya Wolfe (SFS ’21) met at Georgetown’s International Relations Summer Program in 2015, two years before enrolling at Georgetown and long before entering the 2019 Georgetown University Student Association executive race. Now, the pair believe their different experiences working with campus leaders will serve as assets in their campaign for greater representation of student voices.

Nemazi and Wolfe’s campaign slogan, “Run For All,” has an additional reading of “Run With All” because of their emphasis on working alongside leaders of student groups in their advocacy, according to Wolfe.

After training alongside each other for three years on the Georgetown men’s lightweight crew team, Ryan Zuccala (MSB ’20) and John Dolan (MSB ’20) are running for the Georgetown University Student Association executive to combat perceived inefficiencies of student government.

Friends and acquaintances told the pair they sought a productive GUSA executive, inspiring Zuccala and Dolan to announce their candidacy on a platform centered around actionable goals, according to Zuccala.

“The emails started to come out about GUSA and we started to ask some people what they think,” Zuccala said Monday interview with The Hoya. “People didn’t really know what GUSA did so they felt like GUSA never really represented them or got anything done that they wanted. We thought about it, and one day we were hanging out and the idea started to form.”

Sam Appel (COL ’20) resigned from the Georgetown University Student Association senate and stepped down from his bid for GUSA vice president on a ticket with Nicki Gray (NHS ’20) Monday evening. Gray has since continued her campaign without a running mate.

Gray is permitted to continue her campaign for president alone, according to GUSA Election Commissioner Minji Doh (SFS ’19). If elected, Gray would appoint a vice president once in office.

A solo candidate has never run in a student government presidential race in GUSA’s electoral records, which span the last 20 years of GUSA’s 35-year history, according to GUSA Historian Henry Westerman (SFS ’21).

After meeting on Monday evening, Gray and Appel reached the conclusion that Appel would remove his name from the ballot and resign from the GUSA senate immediately. At this time, Gray has agreed to keep the reasoning for Appel’s departure private because of a third-party request, according to campaign manager Marc Pitrois (SFS ’20).

Typical to the start of every GUSA executive election season, Francis-Olvera, Gray-Appel and Nemazi-Wolfe arrived in Red Square with their campaign staff and posters just after midnight to mark the official start of their campaign season.

While not present alongside the three tickets in Red Square, Zuccala and Dolan are confirmed to have entered the race.