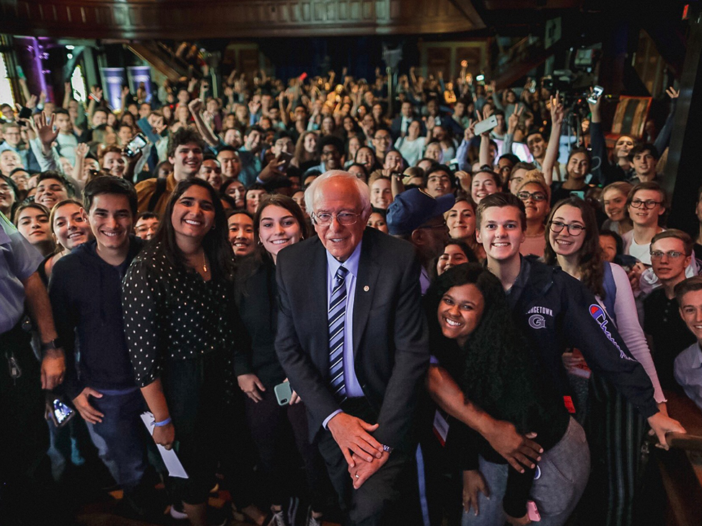 The 2020 Democratic primary and 2020 presidential election represent the first national elections in which many current Georgetown University students are eligible to vote.

Nominating a candidate who can defeat President Donald Trump in the general election is the top priority for the Democratic party, according to Chair of Georgetown University College Democrats AJ Williamson (COL ’21).

Although some Georgetown students believe Senator Bernie Sanders (I-Vt.) will most likely be the Democratic presidential nominee, they have questioned the senator’s chances of defeating Trump. In addition to the issue of electability, students also outlined their perceptions of the candidates, the key political issues on the campaign trail and the flaws within the Democratic primary process.

After three primaries and caucuses — the Iowa caucuses, the New Hampshire primary and the Nevada caucuses — Sanders has emerged as the frontrunner for the Democratic nomination, thus far earning 45 of the 100 pledged delegates, recording the highest vote totals in each of the three states.

Sadie Morris (SFS ’22), founder and president of Hoyas for Bernie, believes the idealistic nature of Sanders’ campaign fits the current needs of the Democratic Party.

“He is the only candidate who will not end up caving when money gets put on the table or things get tricky. We can’t cave right now,” Morris said in an interview with The Hoya. “His platform and his policies — these are things everyone can get behind. They are not actually radical.”

Buttigieg is currently Sanders’ top challenger at 25 pledged delegates. The Buttigieg campaign appeals to a broad range of Democratic voters, as opposed to some other candidates’ targeted voter bases, according to Reed Hasson (SFS ’20).

“The election is less about policy and more about a candidate who can unite the Democratic party,” Hasson said in an interview with The Hoya. “He can bring together young voters as a young man himself with a unique story, while also someone that older voters can depend on. This is a balance we really need to strike.”

While Sanders and Buttigieg have the highest number of pledged delegates, Sanders, Biden and Bloomberg have the highest polling numbers, according to national polling data from FiveThirtyEight, a popular statistical aggregation and analysis website.

Warren’s slightly more centrist political lean relative to Sanders can be seen as an advantage in the general election, according to Maddie Berry (NHS ’22) and Haley Byman (NHS ’20), who are both health care management and policy majors. (Full disclosure: Berry serves as a staff writer for The Hoya.) Byman believes Sanders will ultimately win the Democratic nomination, however, because of his diverse support base.

“Based on caucus results and national polling, he reaches young people and voters of color probably better than any other candidate does,” Byman said in an interview with The Hoya.

For Democratic students who identify with candidates they believe are more moderate, issues like electability and appeal to the center of the Democratic Party are also of central concern.

Bloomberg is of interest to Henry James (COL ’22), who is undecided on the candidate he supports. James intends to vote for a more moderate candidate to increase the Democrats’ chances of defeating Trump.

“Only moderates can beat Trump,” James wrote in an email to The Hoya. “If there is still a divided Democratic segment by Super Tuesday, I will be voting for Bloomberg.”

Since entering the presidential race in November, Bloomberg has spent over half a billion dollars on campaign advertisements, heavily promoting his campaign on broadcast, cable and digital media platforms. This strategy has helped Bloomberg claim key campaign donors from Biden’s campaign, which projects a similar policy platform, according to CNBC.

Biden, who was initially the front-runner when he announced his campaign in April  2019, has since lost large segments of his support due to subpar performances in debates and the early primaries, according to FiveThirtyEight.

Despite this trend, Sina Nemazi (COL ’21), the chair of D.C. Students for Biden, a grassroots organization that includes students from Georgetown, The George Washington University and American University, is sticking with Biden because of the candidate’s moderate positions and wider appeal to voters.

“I’m supporting Joe Biden because we can’t go into this election pushing a leftward tone and tearing Republicans apart,” Nemazi said in an interview with The Hoya. “Going into this election shunning a big part of the country is not the way to go.”

With high stakes for the 2020 election, Georgetown students are prioritizing several defining issues for the primary campaign, including health care, climate change and electability.

Health care was the most frequently cited concern from the 12 students interviewed by The Hoya. Democratic candidates’ health care proposals range from Sanders’ Medicare for All Plan, which would eliminate private insurance, to Buttigieg’s less expansive Medicare for All Who Want It Plan. Buttigieg’s plan would include an option to enroll in Medicare while keeping private insurance.

Health care is a moral issue that requires a strong government solution, according to Byman, who supports Warren but sees Sanders as her second choice.

“We have a moral imperative as a country to make sure everyone has access to health care, and Medicare for All is the single best way to achieve that,” Byman said.

On the other hand, Hasson believes that radical changes to the U.S. health care system should be implemented gradually and sees Buttigieg’s plan as a more feasible option for 2020.

“[The U.S.] is in need of a step-by-step process to show that our economy can handle this and Buttigieg outlines a stepping-stone plan to execute this,” Hasson said.

Following health care, climate change was the second most discussed topic by students interviewed by The Hoya.

Climate change is a key issue for this election, according to Olivia Torbert (SFS ’20), former president and current vice president of the Georgetown Renewable Energy and Environment Network.

“Climate change is the most pressing issue facing the world today,” Torbert said in an interview with The Hoya. “Economic inequality, racial inequality — tandem to all of that is reforming health care. What’s most important is recognizing they all connect.”

Students also emphasized the importance of being able to appeal to both liberal and conservative voters for a Democrat to beat Trump.

President of Georgetown University College Republicans Henry Dai (SFS ’22) will be voting for a Republican in the 2020 election but noted that former presidential candidate Andrew Yang was the most appealing Democratic candidate. (Full disclosure: Dai previously served as a sports writer for The Hoya)

“I try to take a very open-minded approach that crosses party lines,” Dai said in an interview with The Hoya. “Out of the Democratic candidates, the one that Republican voters felt most connected to is Yang. He was tackling a lot of issues Trump wanted to.”

Yang was the best candidate to defeat Trump as he could have swayed former Trump voters to the Democratic party, according to registered Democrat Paige Raborn (SFS ’22).

“He focused the most on why people voted for Trump and had the best turnover of Trump defectors,” Raborn said in an interview with The Hoya.

Despite excitement about voting for the first time and for their preferred candidates, students expressed discontent with the Democratic primary process. Specifically, students and faculty pointed to issues of caucus accessibility, the outsized influence of Iowa and New Hampshire as small, unrepresentative states and the longevity of the process, which can render many votes meaningless.

The current presidential primary system consists of states conducting either primary elections or caucuses to select 3,979 total pledged delegates for the Democratic National Convention, where the Democratic nominee for the 2020 election will be elected.

Historically, the media heavily emphasizes the Iowa caucuses and New Hampshire primary election, as they are among the first states in the primary process, though they only account for 4% of pledged delegates.

The Iowa caucuses Feb. 3 experienced logistical issues because of a defective vote tracking app, causing the primary results to be delayed by three days. The problem with the 2020 Iowa caucuses, in addition to past issues from the 2016 Alaska caucuses, point to a need to disband caucuses, according to science, technology and international affairs professor Jeremy Mathis.

“After participating in the Alaska caucus in 2006, I think we should abandon the caucus process immediately,” Mathis wrote in an email to The Hoya. “It lends itself to unclear results. I think the disaster that was Iowa further demonstrates why that is the case.”

In addition to logistical caucus issues, Iowa and New Hampshire, the first two states to vote in the Democratic primary process, poorly represent the diverse nature of the United States, according to Torbert.

“What’s hard about them is they don’t indicate much about how the country might go,” Torbert said. “Both of these states are tiny and extraordinarily white — not representative of America by any means.”

The Iowa caucuses consist of voters at 1,000 designated precincts across the state selecting their preferred candidate in two caucus rounds. The caucus process is beneficial as it gives voters the opportunity to communicate and discuss their ideas openly before officially casting their vote, according to Byman.

“Caucuses are valuable in that people have the chance to deliberate and realign their vote if their first choice isn’t viable,” Byman said. “However, the caucuses are inaccessible to a lot of voters who can’t take time off or might be intimidated by the public process.”

Several Georgetown students were able to experience the primary process in real time as part of a spring 2020 course titled “Presidential Nominations Lab” taught by professor Hans Noel. As part of their coursework, students could travel to two of the four first states to hold the primary: Iowa, New Hampshire, Nevada or South Carolina. Byman and Williamson were among this cohort. Byman traveled to New Hampshire and Williamson traveled to Iowa.

After traveling to New Hampshire to observe the primary, Byman believes the early states should have less influence on the presidential nomination process due to their small sizes and number of delegates.

“We are acting like a lot of people have already made their decisions when it’s only been two small states that actually represent a small part of the delegate,” Byman said. “The momentum of primaries is really consequential from tiny, nonrepresentative states. It keeps people from voting their conscience.”

In particular, caucuses might not fully represent the entire electorate because of scheduling conflicts for voters and because voters in larger states have little to no say in the nomination process, according to Noel.

“Caucuses are not very democratic. Turnout is very low and restricted to those who can come out at a specific time,” Noel wrote in an email to The Hoya. “Just because there is voting doesn’t mean it’s a democracy.”