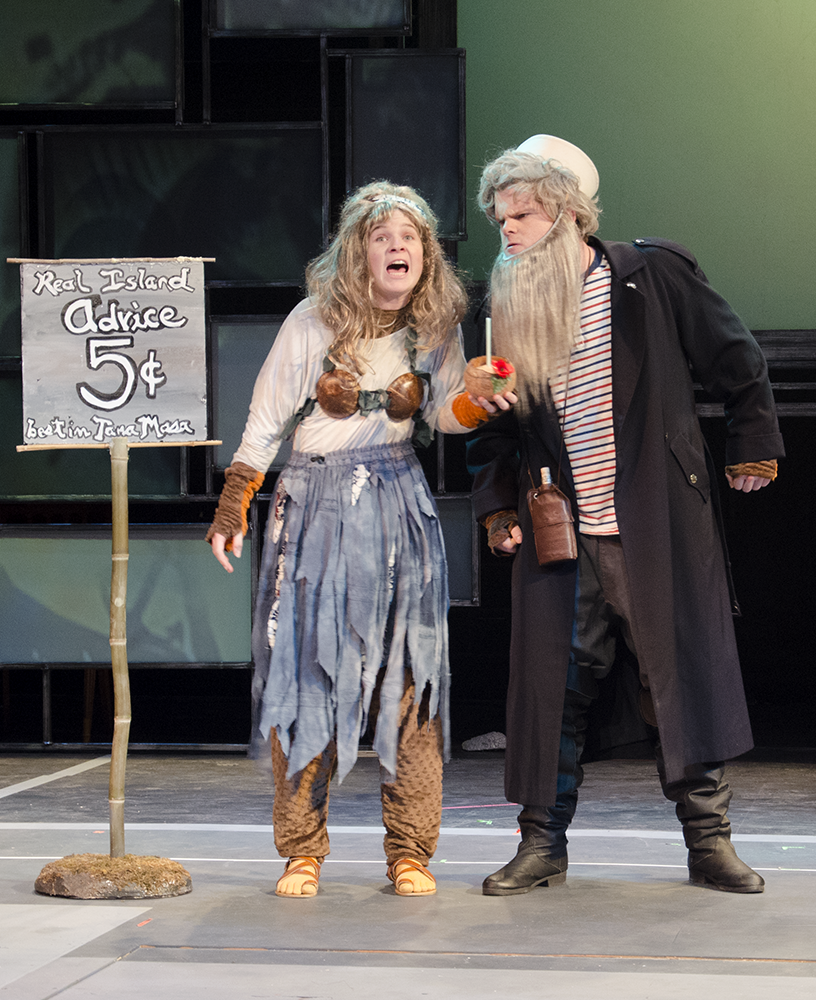 Standing at the podium is a student, seemingly uncostumed, making a normal speech about the horrors of texting and flash photography during the play. As he introduces the production, small details begin to show that this announcement is not so ordinary after all. He mentions recent historical events that sound unfamiliar, and his hands are covered by some sort of 80s-esque fingerless gloves. It is finally clear that the play has already begun. He informs the audience that all human characters will be played by newts. From this announcement on, the audience is transported to a world where talking newts walk around and, somehow, it all feels plausible.

With an expert adaptation and a modern perspective, “War with the Newts” feels unexpectedly relatable and relevant to today’s global issues. This play is the opening production for Georgetown’s “Making New Worlds: The 10th Anniversary Season,” which celebrates the Davis Performing Arts Center’s 10th anniversary. Directed and adapted by professor Natsu Onoda Power, «War with the Newts” is based on the 1936 satirical science-fiction classic of the same name by Karel Capek. The mockumentary style production tackles the ideas of the original novel from the perspective of the intelligent subset of salamanders, who are quickly used as a cheap labor force. Capek, whose 125th birthday falls in 2015, wrote about an exploited group that gains the knowledge and power that lead it to declare a war on its oppressors, a not-so-subtle nod to the political atmosphere at the time, which included fascism, Nazism, segregation in The United States and the arms race. More than 75 years later, Power said she wanted her adaptation to focus on the many themes from the novel that are still incredibly poignant today, like labor conditions, exploitation and racial discrimination,”while acknowledging that the central question of the story is one about humanity in general. “Who do we mean by ‘we?’” Power said. “What lives do we value? When we talk about human rights, what kind of humans are we talking about?” These are just some of the questions she hopes are evoked in her unique take on the sci-fi classic.

Although the themes of the story may be serious, the playful, satirical nature of Capek’s original work is not at all lost. The mockumentary style invites the audience into the newts’ world and incorporates constant comic relief. Fictional news footage, historical speeches and musical numbers are just some of the mediums used to relay this story. The playful and clever nature of this show is not new to Power. In 2012, Peter Marks of The Washington Post wrote that such “childlike wonder” was an “enchanting standard of Natsu Onoda Power.”

A highlight of the production is when newt-guitarist Kanewt West plays along to a musical based on a book by J.D. Salamander. The newts’ world is depicted in movement-based scenes that are playful and fun in a way that makes you forget that no one has said a word in five minutes. The actors share the wide array of roles, playing on each other’s physical comedy and portraying relationships that pull at the heartstrings.

Bring your family or friends to a showing this weekend or the next and leave with that perfect mix of laughs in your belly and reflective questions in your mind. The show runs from Friday, Nov. 13 through Saturday, Nov. 21. Ticket prices range from $7 to $18 depending on show time and university affiliation.