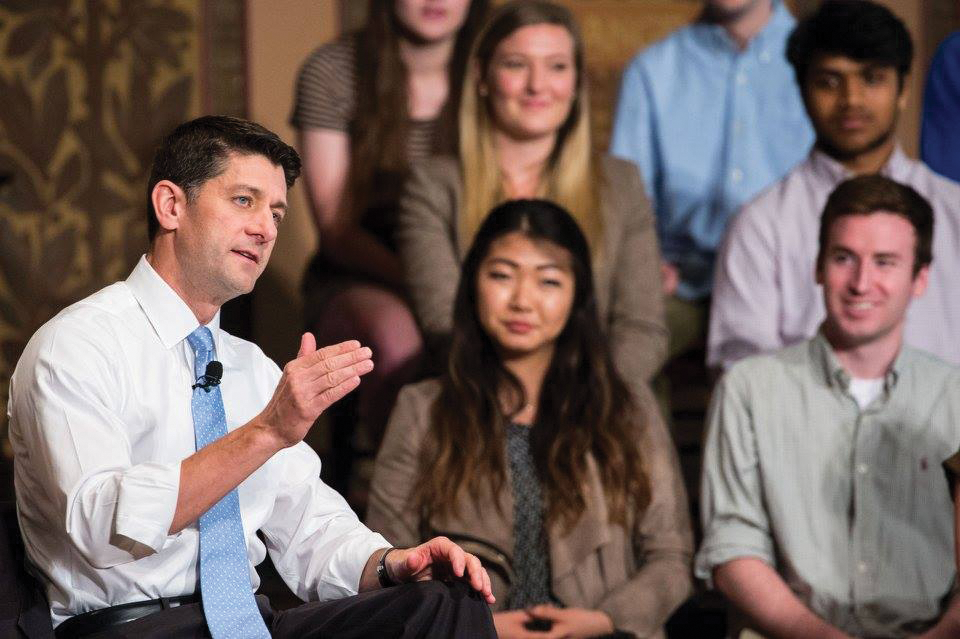 As the presidential election plunges Americans across the country into a fresh bout of political soul-searching, the Georgetown community is grappling with the same conversations unfolding on the national stage.

Georgetown’s status as a premier national university and its Catholic tradition of social justice contribute to a culture in which Washington, D.C., looms as more than just the backdrop.
Georgetown Institute of Politics and Public Service Director Mo Elleithee (SFS ’94) said this distinctive heritage is instrumental to the university’s political identity.

“If I were to say this university has a political compass of any kind, I would say it is one that points to social justice and the common good,” Elleithee said. “The whole Jesuit identity, which is the mission of the university, engaging young men and women to engage in service to others. That is its persuasion. No matter how you approach that, it is up to you. It wants you to find your own path to it.”

GU Politics was established to increase political engagement and interest in public service among young people. As part of these efforts, GU Politics established a fellows program with politicians, political operatives and political journalists including former Gov. Martin O’Malley (D-Md.) this semester and has hosted a series of speakers, including House Speaker Paul Ryan (R-Wis.) last spring.
Having hosted speakers ranging from Sen. Bernie Sanders (D-Vt.) to former Republican Presidential Candidate Carly Fiorina in the past year alone and panels broaching topics like conservative feminism, the university caters to students of every political stripe, according to Elleithee.

“I think the conventional wisdom is that as a whole it is slightly left of center but I would argue that it is about as diverse as the country,” Elleithee said. “Just in my short time back on campus, when I came back about a year ago, I have seen a very active group of progressive students, an active group of conservative students and an active group of libertarian students in terms of ideology.”

Agreeing to Disagree
When government professor Fr. Matthew Carnes, S.J., conducted an anonymous poll in his comparative political systems class on Sept. 15, he discovered 59 percent of his 230 responding students identified as Democrats, 22 percent as Independents, 15 percent as Republicans, three percent as Libertarians and one percent as Green Party voters.

He further found 71 percent of his class planned on casting their ballots for Democratic nominee Hillary Clinton, while nine percent planned to vote Donald Trump. While Carnes said the sample was not perfectly representative of the student body as a whole, the results likely represent the political distribution at Georgetown.

“I would put Georgetown’s political standing left of center as probably the average university of the United States, but I think we have more outspoken Republican students willing to speak up, and more moderate students than you might see at a university if you were just to pick at random,” Carnes said. “I’m really impressed by how committed to open and rigorous debate Georgetown is.”

Georgetown’s political groups exemplify a high level of student engagement by Georgetown students in national politics. The GU College Democrats host more than 100 members in its leadership this semester, and nearly 1,300 members in its mailing list — roughly one in five undergraduates, according to GUCD President Mattie Haag (COL ’18). Comparatively, the GU College Republicans estimate 250 members in its club, 70 of which are active club participants, according to GUCR Director of Membership Hunter Estes (SFS ’19).

Despite Clinton’s popularity during Georgetown’s informal Iowa Mockus, GU College Democrats Chair Mattie Haag (COL ’18) said she initially worried the more progressively liberal members of her organization would be too disillusioned with the Democratic establishment to support Clinton as the nominee. Yet Haag found, coming into this semester, almost all GUCD members uniformly backed Clinton.

“It’s been cool to see that everybody regardless of their differing views within the Democratic Party has been getting behind and excited about Hillary,” Haag said. “When it comes to the really big, important ideas, so things that matter to moderates and progressives, it really has not been as much as a problem as I would have foreseen, and I think we would have become very strong as an organization coming into the election.”

Kevin Toohers (COL ’17), editor-in-chief of the GU College Republican’s publication The Right Way – which is set to relaunch in October with an expanded staff under the name The Georgetown Review – said many within the organization have been reluctant to embrace Trump as their nominee.

“In general, there is an uncomfortableness with Donald Trump among Georgetown conservatives,” Toohers said. “We’ve been focusing more on congressional-level campaigns rather than being involved in the presidential election, largely due to the lack of support toward Donald Trump here on campus.”

However, Trump supporter Zach Hughbanks (MSB ’18) said a sizable amount of Trump backers at Georgetown are driven underground by a stigma that accompanies identifying with the nominee, which precluded the creation of a formal student organization centered around his election.

“There are a sizable amount of people who would be willing to join; it’s just no one would want to deal with the horrible backlash you would receive to start a Hoyas for Trump group,” Hughbanks said. “I’ve had classes where teachers have said ‘I’m sure there’s two or three Trump supporters,’ but no one would want to be handed that mantle.”
Hoyas for Hillary has been active on campus this election cycle. Hoyas for Hillary organized campaign trips to New Hampshire and Pennsylvania in the spring through Hillary for America.

Navigating a political campus
Sociology professor Leslie Hinkson, who teaches a course titled “Education and Society,” emphasized the university’s role in not only developing political ideas but also their expression. She said the more publicly divisive displays of political affiliation that often occur at large, public universities are typically tempered at smaller, private universities such as Georgetown.

“At state schools, you’ll see things like an affirmative action bake sale or things like students mimicking crossing the border, things that are intended to shock, whereas in smaller, private, more established universities, you’ll see there are spaces for college conservatives to do the same thing except with accessible or acceptable discourse out in the open,” Hinkson said. “It’s a lot more polite and less controversial at Georgetown.”

Despite this, Michael Parmiter (MSB ’18), a Trump supporter, said this belies a climate of political correctness that can prove stifling for political discourse on campus, particularly for conservatives.
“I would say that it’s the same here as other universities. The politically correct movement doesn’t want to offend anyone, they want safe spaces and trigger warnings, which I think is very antithetical to what a university is supposed to be,” Parmiter said. “They just label people as racist, sexist, all these kinds of things, and it doesn’t foster dialogue really to understand where people who support Trump are coming from.”

Rooted in religion
Toohers acknowledged the difficulty of being a conservative student at Georgetown after observing a tension between the school’s Catholic identity and some of its liberal policies.

“I think it’s a constant question that Georgetown wrestles with, often framed as how Georgetown can be a Catholic university in the 21st century,” Toohers said. “So I think there can be a disconnect at times. I think one of the bigger examples of this was last spring when the president of Planned Parenthood came to campus and that was really a time when conservative students felt slighted by the administration’s response to the issue and how they handled the issue.”

McCourt School of Public Policy professor E.J. Dionne, who teaches the course “Religion and American Politics,” said the university’s Catholic roots are conducive to an openness that facilitates polices that transcend party lines.

“We have had in our class some really wonderful discussions that cross a lot of different lines — Denominational lines, racial lines, different views on social issues, and I’ve always had the sense that Georgetown may be more diverse in the range of views among students, partly because of our Catholic identity, but partly because our being in Washington means we draw a lot of students with an activist orientation, from all over the spectrum,” Dionne said.