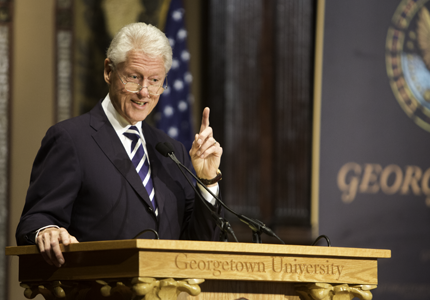 Former President Bill Clinton (SFS ’68) is set to return to the Hilltop next month as the keynote speaker in a four-day symposium reflecting on the legacy of his presidency.

The symposium, organized by the university’s Institute of Politics and Public Service, marks the 25th anniversary of Clinton’s election in 1992. It is set to comprise a series of panel discussions on Clinton’s domestic policy, foreign policy and public service.

Prominent Clinton administration figures are scheduled to participate in the events, including Rahm Emanuel, Clinton’s former senior adviser for policy and strategy and the mayor of Chicago; John Podesta, former White House chief of staff and 2016 presidential campaign chairman to former Secretary of State Hillary Clinton, Bill Clinton’s wife; and former Secretary of State Madeleine Albright, a professor of diplomacy in the School of Foreign Service.

Clinton is slated to conclude the symposium with an address in Gaston Hall on Nov. 6, to be cosponsored by the university’s Office of the President.

“There’s nothing like coming back to Georgetown,” Clinton wrote in a GU Politics news release. “I’ve often said that I don’t think I could have become President if I hadn’t studied there. I’m grateful for the opportunity to return and continue our discussion on what it means to live a life of public service — I believe it’s more important than ever.”

We are thrilled to announce “Clinton 25: @Georgetown Reflects on the Vision of @BillClinton“! Details: https://t.co/jUmp7154vM #Clinton25 pic.twitter.com/P33dIKStzK

Scheduled events also include an “election watch party” of clips from 1992 on Nov. 3 and a conversation among former Clinton campaign strategists including Paul Begala, who is an adjunct lecturer at the McCourt School of Public Policy. The conversation is scheduled to follow a screening of “The War Room,” a documentary about the 1992 campaign.

The keynote address is also the crowning installment in a four-speech series of “Clinton Lectures” delivered in Gaston Hall since 2013 by the former president about his career in public service. Themes of previous lectures include the importance of policymaking and inclusivity and the role of public service in improving people’s lives.

GU Politics Executive Director Mo Elleithee (SFS ’94), who was was a first-semester junior at Georgetown when Clinton was elected, said the election’s 25th anniversary is the “perfect opportunity” to harness Clinton’s legacy and “inspire the next generation of leaders to public service.”

“As a Georgetown undergrad, I witnessed first-hand the energy and excitement President Clinton’s candidacy brought to the Hilltop, and his vision inspired me to dedicate the next 20 years of my life to being a part of the political process,” Elleithee wrote in a GU Politics news release.