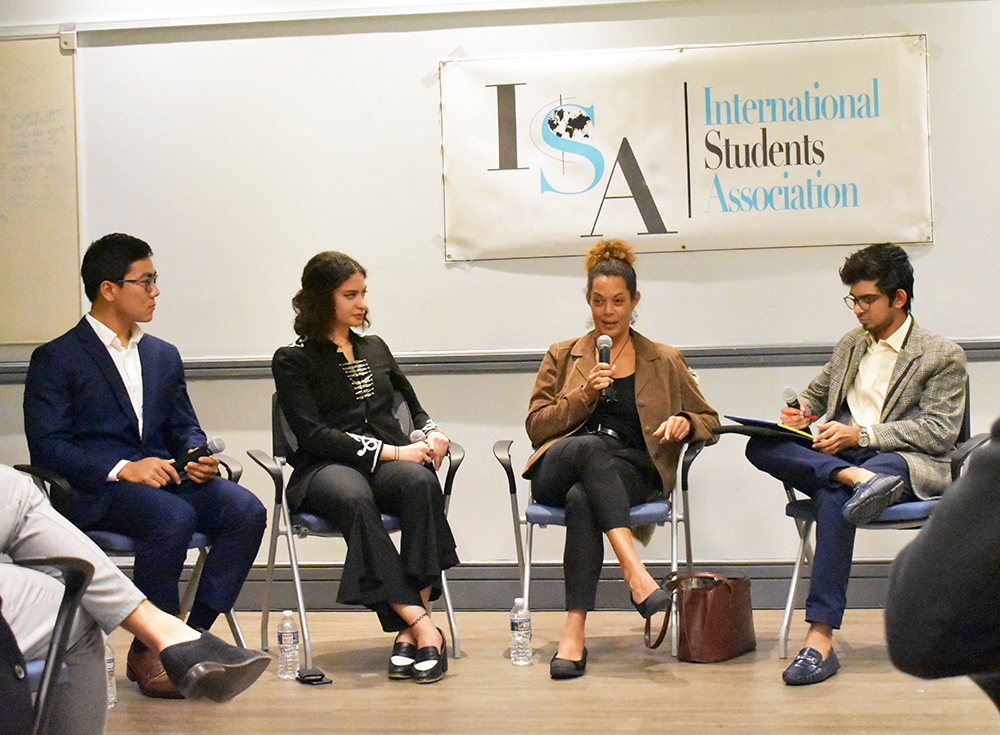 Conversations on nationality and culture must avoid stereotypes and generalizations, argued the panelists at an event titled “Are we the ‘Other’ in Modern America?” led by Lannan Center for Poetics and Social Practice Chair Aminatta Forna on Nov. 1.

The Lannan Center is dedicated to understanding the role of poetry in contemporary society and politics.

Hosted by the International Students Association, and featuring student representatives from the Asian American Student Association, the South Asian Society, the African Society of Georgetown, the Bull Session, a national organization focused on fostering dialogue surrounding identity, and ISA, the event discussed the “othering,” or exclusion, of minorities after President Donald Trump’s election a year ago.

Forna, who was born to a Sierra Leonean father and a Scottish mother, reflected on the impact of globalization on her identity and questioned the animosity against people from multicultural and multiethnic backgrounds.

“My father went to Scotland to Aberdeen University, and he met my mother. They met as a direct result of Britain’s global ambitions,” Forna said. “I grew up in both countries. I have an allegiance to both countries. And I’m afraid that complexity is something, in my view, both journalists and policymakers are going to have to deal with.”

Forna questioned the difficulty some people feel when discussing or acknowledging the role of cultural and national identity in life.

Students on the panel shared their own experiences as people from diverse backgrounds experiencing the national political atmosphere in their own lives.

Natascha Tahabsem (SFS ’19), who was born in Jordan to Circassian and Syrian parents, said people should be more empathetic and understanding before expressing negative opinions about an entire group of people, especially on social media like Twitter, where the hashtag “#BanMuslims” trended in the aftermath of a terrorist attack in New York City on Oct. 31.

“Before people go on Twitter and decide to contribute to that hashtag, I think they should just think about it a bit more and think about what people are going through and what the reasons are that they’re trying to get into this country and be part of this country,” Tahabsem said.

During his campaign, Trump advocated for an overhaul of the U.S. immigration system, calling for more stringent controls, including a ban, on Muslim people entering the United States, as well as for the construction of a wall on the southern border with Mexico.

Following his election, Trump issued an executive order restricting travel from Middle Eastern and African countries with sizeable Muslim populations that has since been challenged in different courts. On Oct. 17, the ban was partially blocked by a federal district judge in Hawaii.

Trump’s administration also plans to rescind the Deferred Action for Childhood Arrivals program, which protected nearly 800,000 recipients from deportation and allowed them to access employment and education opportunities, by March 2017.

Tahabsem said Georgetown students have been affected by these actions.

“I did see a change in the way my Muslim friends started reacting to society or Georgetown in general, the Georgetown community,” Tahabsem said. “There was a lot of fear that I did not see in them before.”

“There’s an idea that the fact that you’re not American there’s no opportunity for you to come here for free or to come here on a subsidized program. It’s a very vast generalization,” Titi-Ofei said. “It’s not possible for me and my sister to come to college here and both pay $73,000 a year.”

With the university’s resources for providing financial aid being “extremely limited,” according to the Office of Student Financial Services, many international students largely depend on family contributions, private loans, scholarships or financial assistance from their governments to cover tuition.

“I urge everybody here to take time to think about the fact that people’s backgrounds vary and people are here under different circumstances before they judge or make such generalizations,” Titi-Ofei said.

The panelists also spoke on the challenges they faced as non-American nationals or first-generation Americans.

Tahabsem said that starting the Bull Session, an organization for discussion of complex issues among international students, helped her feel like a part of the Georgetown community.

“I did feel excluded most of the time, and as a response I started the Bull Session, which is an international discussion society in which we need to talk about controversial topics,” Tahabsem said.

“I’ve been really, really involved in the Asian American Student Association as a way to promote Asian-American identity, and then I think we’re doing an amazing job,” Liu said.  “I’m really optimistic about it.”

Titi-Ofei called on people to consider different narratives and to avoid making sweeping generalizations about others.