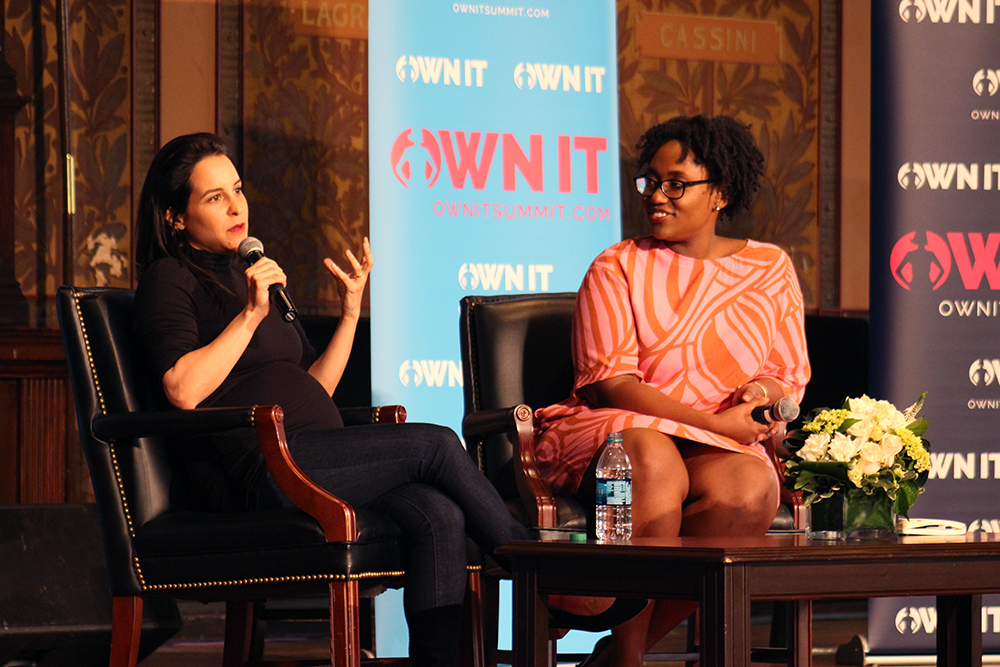 The sixth annual OWN IT Summit brought women from the public and private sectors to Georgetown University on Saturday to highlight leading women that not only broke barriers, but also used their influence to uplift other women.

Approximately 215 people attended this year’s OWN IT Summit, a conference aimed at bridging the gap between female leaders and their millennial admirers, to discuss how women can use their success to provide opportunities for others, according to Paige Taylor (COL ’19), co-chair of the 2019 OWN IT Summit.

“We wanted these conversations to highlight what happens when women take the lead and rise up, whether that’s working to secure venture capital funding for a new business venture or winning a heated Congressional race,” Taylor wrote in an email to The Hoya.  “So much of what we focus on at OWN IT is forward-thinking — women who are breaking down barriers, and who are disruptive in the best way possible.”

OWN IT was founded in 2014 by Helen Brosnan (COL ’16) and Kendall Ciesemier (COL ’15) to address the disproportionately low rates of women in leadership positions, both in the public and private sectors. The founders sought to provide young women with the chance to learn from and connect with women in leadership roles in a variety of fields, according to the OWN IT website.

“We’re shaking up the women’s leadership arena by producing events accessible to college-aged women of all demographics — not just those who can afford to pay their way,” the website reads.

The summit, which brought over 100 speakers to Georgetown’s campus, featured 31 break-out sessions that attendees could attend two of, two panel discussions and a mainstage conversation between award-winning historian Alexis Coe and Marcia Chatelain, associate professor of history and African American studies at Georgetown University and member of the OWN IT advisory board.

OWN IT also presented the Gwendolyn Mikell Award for Women’s Empowerment, which aims to address the inequities and barriers to success faced by women, to Ghipsel Cibrian (COL ’16). The award is in collaboration with the Georgetown Social Innovation and Public Service Fund, which allocates annual grants to students and alumni to start their own social ventures.

Coe, the summit’s keynote speaker, and Chatelain discussed the challenges female historians face and historical narratives’ neglect of women’s experiences as well as ways to draw attention to the often unrecognized contributions women make. Coe has used her platform as a historian to highlight perspectives often ignored by male historians, Taylor wrote.

“She’s looked back at history and uplifted the stories of lesser-known women or women who have been misrepresented,” Taylor wrote.  “But Alexis has also brought new angles and perspectives to stories we all know. For example, she shared on the OWN IT stage that she’ll be the first female biographer to write a book about George Washington.”

The culture of idolizing predominantly famous and well-known women, most pronounced during celebrations of women’s achievements like Women’s History Month, can be harmful to female leadership and empowerment, Coe said at the event.

“There’s this impression of #BossLady where if you aren’t at the center of everything at a time where you really couldn’t be, you weren’t an influencer, you didn’t actually have a place where you could do anything,” Coe said.

Male historians have often excluded women from history, leading to historical narratives that emphasize the experiences of elite white men, according to Chatelain.

“The assumption was that it wasn’t there because he didn’t think it was important,” Chatelain said in the conversation.

Though more diverse historians are elevating the narratives of women, female voices, such as Walt Whitman’s sister, are often relegated to the background of historical discussions and used to provide context for the famous men surrounding them, Coe said at the event.

“For a long time, for women to be significant in the collective memory, they had to be considered what was known as ‘domestic witnesses,’” said Coe at the event. “Whitman’s sister, for example: Her journal is going to be read for what he ate, what he said, where he went, in a really narrow way so they don’t even look at what was this woman’s interior life.”

“For a long time, I was asked whose wife I was, whose research assistant I was,” Coe said.  “We’re told what we can and cannot do in explicit ways, but also in implicit ways, too.”

The morning panel, “By Women, For Women,” featured speakers in the business field and the afternoon panel, “Women’s Wave,” featured women in politics. The panelists shared their experiences to uplift young women wishing to pursue male-dominated careers.

Because of difficulties associated with entering male-dominated workspaces, refraining from entering jobs stereotypically paired with female entrepreneurship can be daunting, according to Nicole Corbett, a speaker on the “By Women, For Women” panel and founder of Worn, an entirely female-led agency that helps companies develop their branding.

“Listening to your own inner voice about what is right to do while everyone around you is telling you something else is very difficult,” Corbett said at the event.

Break-out sessions focused on female leaders in a variety of professions including journalism, cybersecurity and law. These sessions were designed to connect students with professional opportunities, according to Laurie-Maude Chenard (SFS ’19), director of speakers for OWN IT 2019.
“My hopes for the summit are to connect college-aged women with women who are experts in their fields and are paving the path for others like them, to create accessible spaces for women to talk about their experiences and the things that they’re passionate about, and to leave attendees feeling inspired, empowered, and supported,” Chenard wrote in an email to The Hoya.