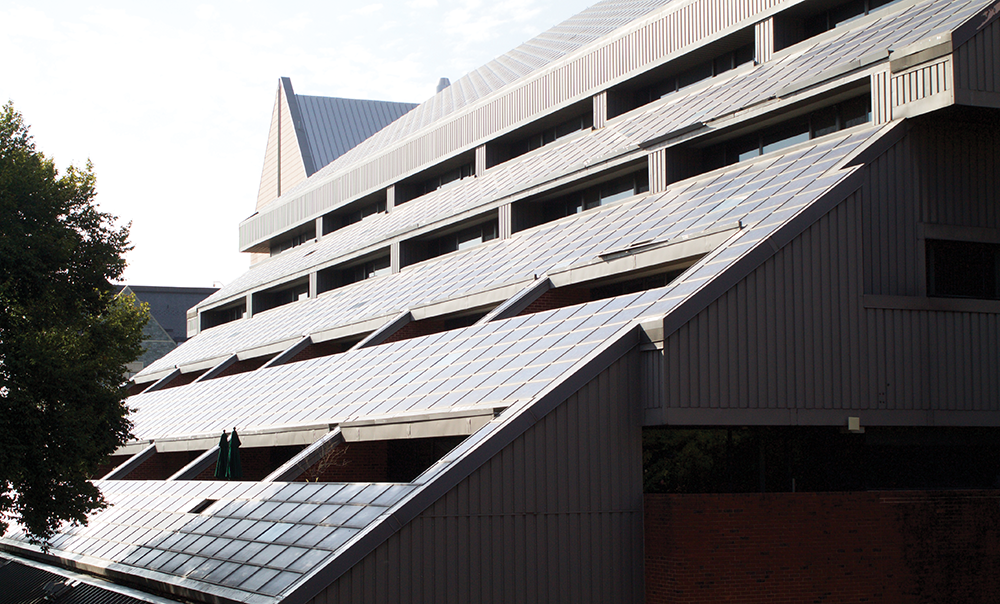 After criticism from environmental and indigenous rights activists over the university’s proposed solar panel initiative, the Maryland Department of the Environment held its second informational hearing about the project May 13.

Georgetown University announced its agreement with Origis Energy USA to build a solar panel system September 2017. The proposal entails cutting down 240 acres of forest in Nanjemoy, Md. The installed solar panels on the property would provide half of the university’s electricity needs.

Monday marked the second public meeting in response to criticism about the environmental impact of the plan after an initial Feb. 27 hearing required an extension. In addition to written comments, which can be submitted until June 3, the Department of the Environment is holding the hearings as it determines whether or not to grant the project the permit needed to build on wetlands.

Because of mounting criticism, Georgetown is employing an outside party to evaluate the proposed project, according to a university spokesperson.

“In our role as the project customer, Georgetown has spent the past several months engaged in a thorough internal review of the project,” the spokesperson wrote in an email to The Hoya. “We have engaged an independent third party expert to review this offsite solar project. We are also engaging with faculty members with expertise in environmental issues and with our broader community.””

The area designed for deforestation is located on land that is spiritually significant to the Piscataway people, a group indigenous to southern Maryland and Washington, D.C., according to Valarie Proctor, a member of the Cedarville band of Piscataway who is involved in activism to stop Georgetown’s planned project and has tweeted extensively about the issue.

Proctor and others, including Georgetown student groups, are circulating a petition titled “Urge Georgetown University to #ProtectPiscatawayLand” on social media, requesting that the university halt any work on the project and consult with the Piscataway community on site alternatives for the project. As of May 16, the petition has 412 signatures, according to Proctor. The Maryland Department of Natural Resources prohibits projects such as this and other development in the area, according to the petition.

“I feel I have a deep obligation to protect the very thing that’s embraced me and my family for thousands of years,” Proctor wrote in an email to The Hoya. “This is our medicine and our home. This fight has been heartbreaking because I find it incredibly difficult to communicate just how important land and nature is to indigenous people.”

While the petitioners appreciate the university’s attempt to develop more sustainable energy sources, they ask that the university identify alternative sites for the project.

“We want renewable energy development in Maryland, but not at the expense of indigenous ancestral forestland,” the petition reads. “We believe that there are many options to have both and this is what we are fighting for in this campaign.”

“It is our duty to hold Georgetown accountable for recognizing AND respecting the people whose ancestral lands are being impacted by this project!,” NASC’s Facebook post reads.

The petition also notes the potential environmental impacts of the project, which have been the center of previous criticism of the initiative.

Although the solar panel proposal is part of Georgetown’s commitment to reducing its greenhouse gas emissions by 50% by 2020, the site’s value to the environment outweighs the benefits of the location, according to Mary Pat Dougherty, a Nanjemoy resident.

“How does cutting down trees, destroying habitat, disturbing soil, traversing wetlands, traversing streams and potentially polluting them and driving up air temperatures add up as a way to reach local, state, regional and federal renewable energy and climate goals,” Dougherty said at the Feb. 27 hearing.

The land is a targeted ecological area, a designation determined its high ecological value and priority for conservation, according to the Maryland Department of Natural Resources.  The site has also been noted as an important bird area by the Audubon Society, a bird conservation group.

Despite the criticism and Georgetown’s stated efforts to further evaluate the project, the university maintains that the solar panel project will ultimately have a net positive effect on the environment and greenhouse gas emissions, according to the spokesperson.

“While our review indicates that the project results in benefits to climate change associated with net reductions to carbon dioxide emissions, we are closely monitoring the regulatory process being conducted by the Maryland Department of the Environment,” a university spokesperson wrote. “Should MDE approve the project, Georgetown will work with Origis to explore additional voluntary environmental enhancements to make the project even more ecologically beneficial.”

This article has been updated May 19, 2019, to reflect the accurate spelling of Valarie Proctor’s name and to add comment from Proctor. A previous version named her as Valerie Proctor.