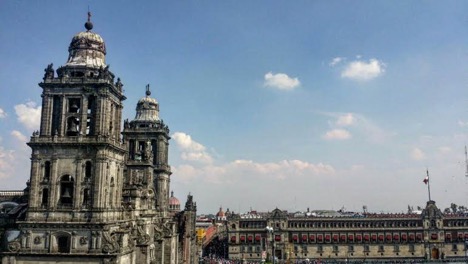 Mexico City’s layered history, massive population and undeniable charm come together to create a dynamic, fascinating spot for travelers. Its world-class museums, incredible gastronomy and colorful neighborhoods could keep you busy for months, but just a day in Mexico City is enough to give visitors a peek into a vibrant, indomitable city.

Wake up and listen to the busy streets, already bustling at 8 a.m. Street vendors have been setting up their stands for the past hour and breakfast “fondas” are ready for their first customers. As tempting as creamy Oaxacan-cheese quesadillas, homemade atole — corn-based hot chocolate — and crunchy chilaquiles — tortilla strips and salsa — may look as you walk past the crowded restaurants, try to make it to El Cardenál with a good appetite. The best breakfast in town is served in picturesque southern borough San Ángel. Founded in 1969, the restaurant has long preserved the essence of popular Mexican cuisine. After enjoying a selection of crumbly, freshly-baked conchas, shell-shaped sweet breads; smooth, creamy nata, a cream made from raw milk; and savory mole enchiladas, an ancient chocolate-based, sweet-and-sour sauce over chicken and tortillas, you will feel energized to start the day.

By 10 a.m., you will be ready to dive into San Ángel’s art district. In a city of crazy traffic and rising skyscrapers, the cobbled streets of San Ángel remain a colonial oasis. Across the tree-lined plazas and sprawling haciendas, charming craft markets and artisanal coffee shops are teeming with goods and people. Wander through the quiet streets and head to the art bazaar. At Plaza del Carmen, sidewalk fences are bursting with arguably some of the best artwork and crafts for sale in the city. Don’t be afraid to haggle with the artists as prices are negotiable, an opportunity for affordable deals for magnificent pieces of traditional Mexican art.

Although noon might sound perfect for lunch, head into a couple of museums first. After 12 p.m., the rush of most museums has died down, which makes for a quieter, more enjoyable visit. In a city of over 150 museums, there is something for everyone. Contemporary art lovers will not be disappointed at the University Museum of Contemporary Art, featuring the latest national trends.

The Anthropology and History Museum and the Templo Mayor Museum will captivate history buffs through an exploration of Mexico’s indigenous heritage. If you are lucky, you may catch the “voladores de Papantla” performing outside the Templo Mayor in an indigenous rite in which they “fly” from ropes twisted around a pole.

Wander down Paseo de la Reforma towards the Chapultepec Park for a post-museum snack. This route will take you past some of the most beautiful landmarks in the city, including the Independence Angel and Diana the Huntress statues. Feel free to stop by any of the multiple street vendors and try mangos enchiladas, spicy mangos; tortas guajoloteras, a sandwich filled with a sweet tamale; or skimos, a traditional smoothie made with chocolate, papaya and banana. Escape the city’s chaotic traffic in Chapultepec’s beautiful and resolutely calm greens. Feed the squirrels, visit the Chapultepec Castle or take a boat ride through the stunning lake.

After a busy day, you’ll be craving a late lunch. Since no trip to Mexico is ever complete without eating at one of its many markets, head to the city’s newest foodie destination, Mercado Roma. You should be there by 6 p.m., the perfect time to dine at the evening terrace, which opens at 5.

Situated in bohemian borough La Roma, the bustling food market offers artisanal treats from over 60 vendors, most of whom produce farm-to-table dishes and desserts with local ingredients. With communal tables set against a vertical garden, guests can roam the stands and witness the behind-the-scenes cooking.

The mouthwatering selections range from pozole, a traditional Mexican stew, to chocolate-filled churros coated in cinnamon. Biergarten Roma, the city’s first beer garden, is a must, with draft and bottled beers hailing from all corners of the world and Mexican snacks with an Oktoberfest-style twist.

After trying some of the city’s regional delights, take a late afternoon stroll through La Roma’s secondhand bookstores and vintage shops. Grab coffee and tasty pastries at La Puerta Abierta, a cozy bakery with the best brioche in town.

Mexico City is famous for its night scene, so recharge your energy to keep up. Head to burgeoning district La Condesa for a refreshing dinner. This happening borough has become the ultimate gourmet destination. Informally known as the district to see and be seen, the trendy neighborhood’s streets, named after famous writers and philosophers, add an artistic flourish.

After visiting the incredible galleries, shopping at the enchanting little boutiques and strolling through Mexico Park, filled with lush trees and quaint promenades, you will be in the perfect mood for a spectacular meal. Restaurant Azul’s menu, updated monthly, is a culinary journey. The restaurant’s busy atmosphere and gorgeous balconies pair well with the adventurous foods created by rotating guest chefs. Customer favorites include the mango shrimp, the Oaxacan chocolate tamales and the veal salpicón with avocado and tomato.

La Condesa’s nightlife is an invigorating sensory experience, and you will be able to meet the coolest crowds of posh, young chilangos, whose usual hangouts are around this borough.

If you aren’t too tired by midnight and long for genuine Mexican music, Plaza Garibaldi’s famous mariachi bands provide the perfect goodbye to the city. You can even step into the Salón Tenampa, an original canteen founded in 1923 and be transported to a golden age of Mexican entertainment with songs by José Alfredo Jimenez and Pedro Infante. At 70 pesos, about $3.30, a song, you can request traditional music from the itinerant mariachis.

Despite such a busy day, you’ll have barely scratched the surface of all the wonderful sights and sounds the city has to offer. After 24 hours exploring Mexico City, you will probably want to extend the trip, at least for one more day.