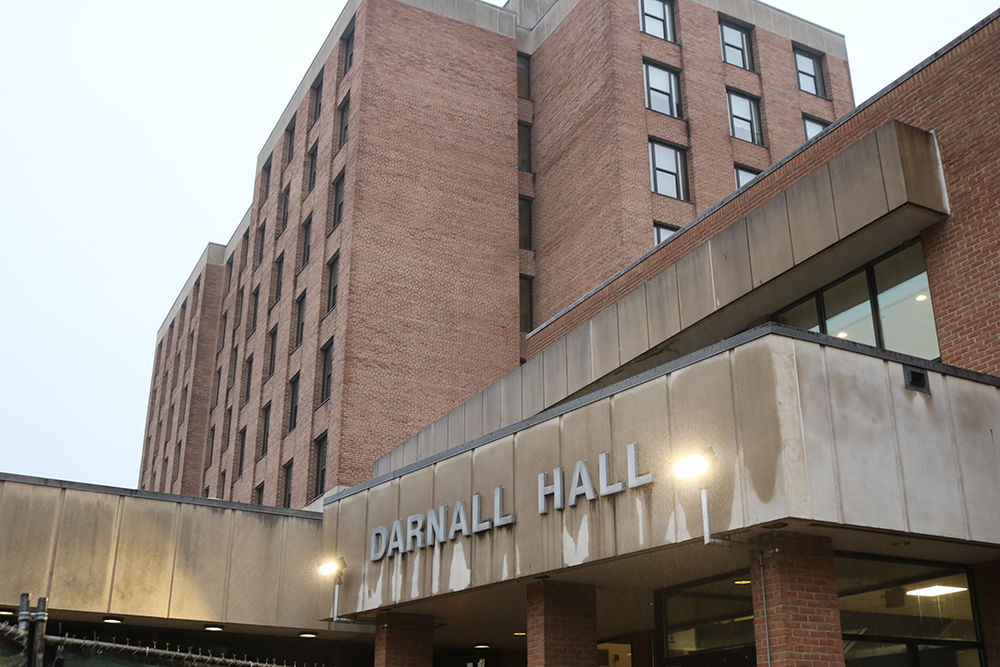 Student residences Darnall Hall, Arrupe Hall and Henle Village experienced a complete water outage Friday night, with the university and local authorities yet to determine its cause.

The water outage began at approximately 10:30 p.m. Friday and was resolved across campus by 8 a.m. Saturday. Neither the District of Columbia Water and Sewer Authority, which conducted system repairs Friday evening, nor the university is claiming responsibility for the outage.

The university was working closely with D.C. Water to restore water across campus, according to an email sent to affected students during the outage at 12:30 a.m. Saturday morning by the Office of Residential Living.

Although D.C. Water isolated a section of the District’s water distribution system in the affected area to make repairs Friday evening, Marlee Franzen, D.C. Water manager of operations, said the authority was not responsible for the outage.

“We did isolate a main along Reservoir Road Friday evening, but we made sure that the hospital still had service,” Frazen wrote in an email to The Hoya. “We do not believe that we did anything to affect the University pressure.”

The university is communicating with D.C. Water to determine the reason for the outage, according to a university spokesperson.

“We are grateful DC Water was able to restore service and apologize for any inconvenience it may have caused,” the spokesperson wrote in an email to The Hoya. “We are continuing to work with DC Water on identifying what happened and how to prevent it in the future.”

None of the water utilities in Darnall Hall functioned during the outage, according to Darnall Resident Katie Bracken (COL ’22).

“Around 10:30 p.m., we noticed that the water wasn’t running out of the water fountain; none of the sinks were working, or showers; none of the toilets were flushing,” Bracken said.

This water outage comes after several infrastructure-related issues during the 2018-19 academic year, including the discovery of black mold and elevator failures. Most recently, the university relocated 85 students living in the top floors of Alumni Square because of concerns about the ability of the roof to withstand heavy snow or strong winds.

Darnall resident Lucy Chatfield (COL ’22) was advised by her Residential Adviser to go to the Leavey Center to get water during the outage.

“It was 1:30 and we were really tired and we just wanted to brush our teeth and go to bed, but we had to go to Leavey, which was annoying because it was cold,” Chatfield said. “People were in their pajamas. We ran into a lot of people getting water from a vending machine.”

In the days preceding the outage, a pipe burst and fire alarms malfunctioned, going off inadvertently three times, in Darnall Hall, according to a Feb. 4 email sent to Darnall residents by Darnall Hall community director Tom Mangano.

Many Darnall students have become frustrated with the frequent facilities issues in their dormitory. The general sentiment in Darnall during the water outage was annoyance as a result of repeated problems in the dorm, according to Chatfield.

Students in Henle Village were also concerned that flushing the toilet would exacerbate the problem during the water outage, according to Henle resident Amelia Walsh (SFS ’20).

“I am not placing blame, but it was hard for us because we didn’t know originally if we could flush the toilet because we were like ‘Oh my gosh we aren’t going to have any water anymore after that,’” Walsh said.

Although Walsh had never experienced a water outage as a Georgetown student prior to last week, she has encountered a variety of facilities issues as a Henle resident.

“Our stove wasn’t working for a long time, one of our sinks was dripping, one of our showers wasn’t working, a couple of our lights kept going out,” Walsh said. “Once those were fixed, we were pretty excited, so then when the water was out we were like, ‘no!’”

D.C. Water has offered to work with Facilities to prevent future outages, according to Frazen.

“We are more than happy to work with Georgetown University to troubleshoot their pressure issue,” Frazen wrote. “In addition as a precaution we will check some system valves just to ensure they are operating properly.”