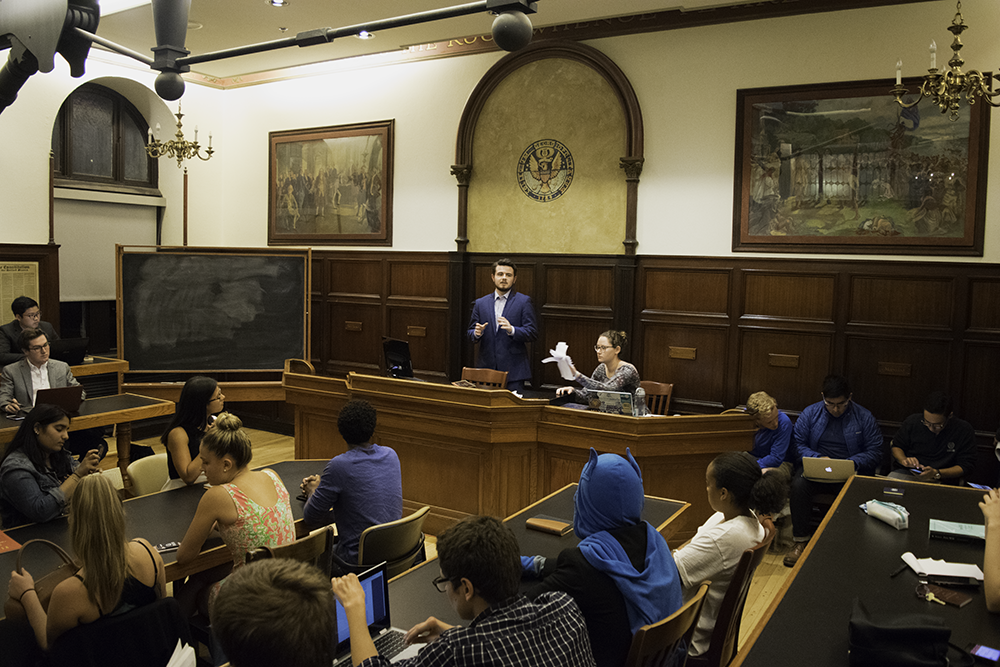 Georgetown University Student Association senate elections for sophomore, junior and senior representatives are set to run between Wednesday and Thursday evening, following a current GUSA senate campaign to promote greater diversity and inclusivity within the body.

Six rising seniors, 12 rising juniors and 13 rising sophomores have declared candidacy in the upcoming race. Each grade receives six seats in spring elections. Another round of voting will elect seven freshmen and three at-large representatives next September.

After the passage of the referendum, current GUSA senators Juan Martinez (SFS ’20) and Madison Álvarez (SFS ’21) planned Senate Outreach Week from April 4 to 8 to empower students who might not have otherwise run for GUSA senate. Martinez serves as chair of the Equity and Access Committee and Álvarez is vice-chair of the GUSA’s Socioeconomic Advocacy Policy Coalition.

Álvarez said they reached out to students to offer mentorship for those who may feel intimated or excluded from GUSA.

“We wanted to let these students know that they are welcome and wanted by the Senate, educate them on the often confusing internal structure of the Senate, and offer ourselves as mentors for those who wanted extra support during their campaign,” Álvarez wrote in an email to The Hoya.

The week included Facebook publicity campaigns with the hashtags #BecauseInclusivityMatters and #BecauseDiversityMatters, as well as office hours during which prospective candidates could meet with former senators for advice.

Martinez said inspiration for the project came from his personal experiences with GUSA senate campaigns.

“The original inspiration for Senate Outreach Week came to me my freshman year. As a queer Latino and an undocumented student, the idea of putting myself out there in running for Senate was terrifying,” Martinez wrote. “For one, friends who held similar identities to me were simply not involved in GUSA and could therefore not provide advice on how to run a senate campaign took into account my various identities.”

Álvarez agreed, adding she would not have run for senate without the email of support she received from former GUSA Vice President Jessica Andino (COL ’18).

“When I got an email from the outgoing VP (a woman) offering herself as a source of support for any women who took the risk of running, I decided to go for it, even though I was the only female contending for an At-Large seat,” Álvarez wrote.

Giving back through mentorship is crucial for GUSA’s future diversity, Álvarez said.

“Now that I have the chance to mentor other new candidates in the same way I once was, I feel like I’m giving back to the same community that once supported me in my time of need.”

The outgoing senate class has the best socioeconomic and LGBT representation compared to previous years, according to demographic data compiled by Martinez and Álvarez. Forty-three percent of senators identified as a part of the LGBT community, compared with an estimated 4.1 percent of the national population. However, the survey showed underrepresentation of racial and ethnic minorities, women, individuals with physical and/or mental disabilities and religious minorities.

“Being in an environment like Georgetown it is easy to get wrapped up in the competitiveness of it all, but from the moment I met the former senators to the moment I decided to run there has been a huge support of one another,” Coleman wrote in an email to The Hoya.

Candidate Kimberly Nuñez (COL ’21) attended office hours with Martinez and credited him for her decision to run.

“While I was considering running for GUSA senator, he made me realize the extent to which being a student senator can contribute to enforcing the action that is needed on this campus,” Nuñez wrote in an email to The Hoya.

“They were very transparent about their experiences in the Senate, and more than willing to share their advice with me about running,” Skinner wrote in an email to The Hoya. “I left feeling encouraged to make an election bid.”

“I’m so proud of how many female candidates and people of color are running,” Lafferty wrote in an email to The Hoya. “Last election, and in the past, the senate has been a male-dominated entity. It is incredibly empowering to see such a strong, diverse group seeking leadership positions.”

Although attendance at office hours was not as high as was hoped, Martinez is optimistic for the future of the program and its impact.

“Taking into consideration the short timeline we had due to the changing in elections’ time I would say outreach was pretty successful,” Martinez wrote. “Although attendance was not spectacular at every session, an overwhelming majority of individuals that attended went on to sign up to run this elections cycle.”

Senator Chad Gasman (COL ’20) said the week was “marginally successful,” but was doubtful about progress. Gasman said more students of color are running this year than before, but fewer women are running than ran last year.

Álvarez and Martinez acknowledged it is too early to assess Senate Outreach Week’s success. However, a March 25 amendment to GUSA bylaws, which modified the candidacy registration form to ask optional questions about identity, seeks to track diversity in the senate.

The Election Commission will compile responses and present findings to the senate, according to Doh.

“The data collected in this form will only be viewed by members of the Election Commission, who are authorized to handle private information, and under no circumstance be revealed outside of this body,” Doh wrote. “The information is collected to be used to form non-identifying aggregate statistics that will be presented at a public meeting of the GUSA Senate.”