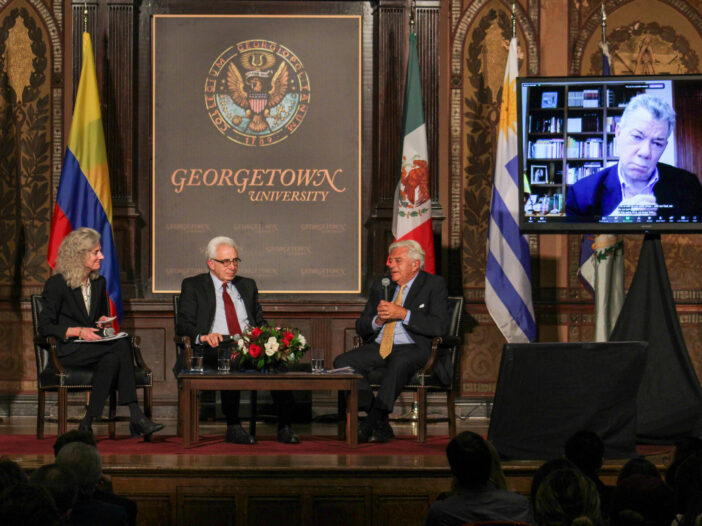 The Nov. 30 event that took place in Gaston Hall was an initiative by the Georgetown Americas Institute (GAI), an organization dedicated to researching and discussing the challenges impacting Latin America. Former president of Uruguay Luis Alberto Lacalle Herrera, former president of Mexico Ernesto Zedillo and former president of Colombia Juan Manuel Santos, who joined the conversation virtually, tackled discussions on poverty, inequality and organized crime in Latin America in a conversation moderated by Diana Kapiszewski, an associate professor of government at Georgetown University. Clinton, who intended to attend in-person, delivered a speech on U.S. ties with Latin America remotely, after testing positive for COVID-19 just hours before the event.

Clinton said it is vital for students at Georgetown to learn about the conflicts taking place in Latin America so that they are equipped to tackle them.

“They need to know that it’s not just a phrase to say we need to be involved with the rest of the world, that getting a Georgetown education which teaches you about other countries and cultures, particularly in the Americas, is not just something that should help your career,” Clinton said. “It has to build a state of mind among our people that what we have in common is more important than our interesting differences.”

He said the United States cannot walk away from Latin American countries like Colombia and Venezuela at a time when they are facing a reemergence of narcotics trafficking and gang violence.

“We need to be there with them side by side,” Clinton said at the event. “All of us.”

Alejandro Werner, the founding director of GAI, said the goal of the event was to mark the institute’s inaugural year and to foster dialogue about the living standards in Latin America.

“With this event, we celebrate our inaugural year and we gather to reflect the social and economic challenges that Latin America faces, as well as the need to strengthen and redesign its regional ties and its relationship with the U.S. and Canada,” Werner said at the event.

In the 2020 announcement, DeGioia said the institute would focus on four spheres: governance and the rule of law, economic innovation, social and cultural inclusion and sustainability and the environment. He said he looks forward to the contributions the institute will make to the Georgetown community.

“I would like to thank our institute staff, the institute’s faculty committee, its advisers for their work to guide this new endeavor,” DeGioia said at the event. “We look forward to the contributions of this new institute and the collaborations and partnerships it will foster.”

Zedillo, who served as Mexico’s president from 1994 to 2000, said that many Latin American countries are facing a regression of democracy.

“Once they are in power, the first thing that they like to do is to start undermining democracy within the institutions that allowed them in the first place to compete and to win power,” Zedillo said.

Following the event, students condemned the inclusion of Zedillo at the event. Zedillo was charged with the 1997 killing of 45 Tzotzil indigenous people. In January 2012, he claimed that his status as a former president granted him immunity for his crimes.

Lacalle, who served as president of Uruguay from 1990 to 1995, said that Latin America is placed in a difficult position as its ideals and economics are tied to several different foreign alliances.

“If we take the side of the values, of course we are with the United States, with the European Union and with the Christian civilization,” Lacalle said at the event. “On the other side, the reality of trade and prosperity comes from the relationship with China.”

Santos, who served as Colombia’s president from 2010 to 2018, said the biggest problem Latin American countries are facing is the war on drugs.

Drug traffickers and organized crime have permeated Colombia, according to Santos.

“Colombia lost our best journalists, our best judges or best political leaders and our best policemen in this war, and I personally had the responsibility of fighting this war when I was minister of defense,” Santos said at the event.