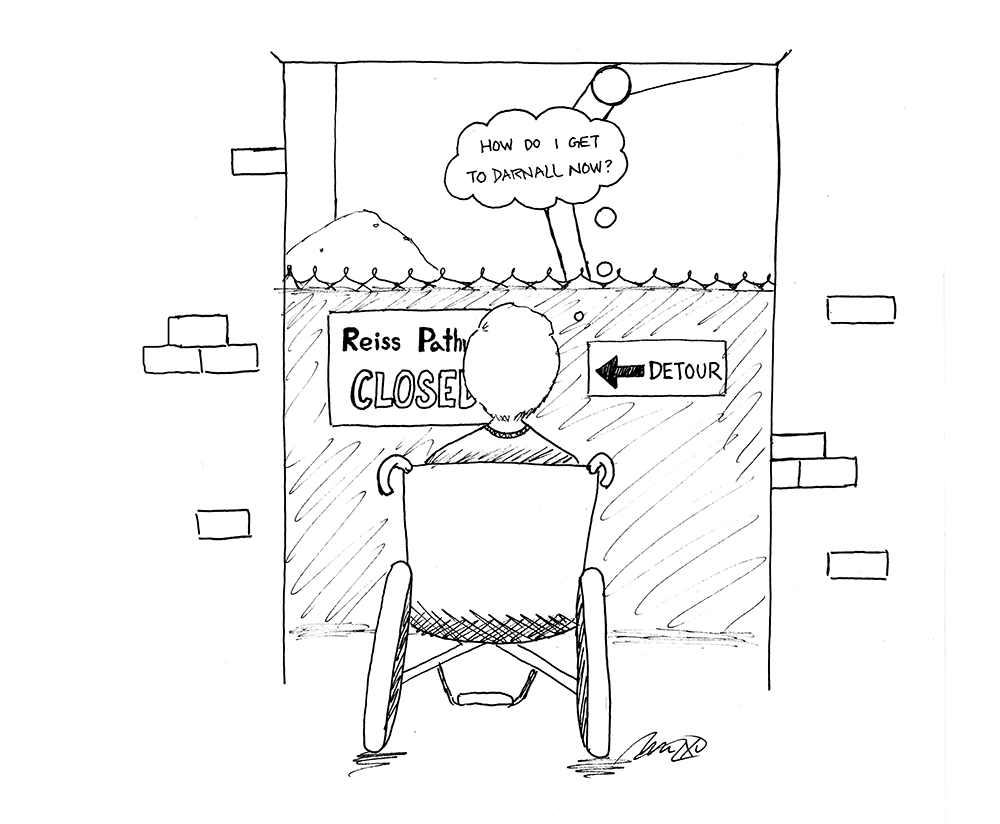 In mid-September, both Copley elevators broke down, stranding every physically disabled student living on campus. After the Healey Family Student Center opened this semester, it took over a month for automatic buttons to be installed in the only available entrance. Last spring, a deaf student was denied access to American Sign Language interpretation for a sponsored test prep course. Two years ago, when Regents Hall opened, the first-floor elevators were located behind two heavy doors with no automatic button.

Before that, the Braille sign for the LGBTQ Resource Center was above the doorframe. A blind student requesting Braille materials was outright denied. Prospective students using wheelchairs were told they would have to be carried during a campus tour because of physical inaccessibility.

Every semester, I am contacted by students being forced away from Georgetown through involuntary medical leaves of absence. These students, many of whom have disabilities, are disproportionately drawn from gender, sexual and racial minorities.

These incidents are connected to the common theme of ableism — systematic, institutionalized prejudice against disabled members of societies that values certain kinds of bodies and minds over others.

For more than two years, I have been advocating for the creation of a Disability Cultural Center as a complement to our existing diversity centers. The administration has failed to acknowledge the proposal, let alone commit to any plan for a DCC. A DCC would serve as a central hub for disabled students and allies, disability studies resources, involvement in disability rights and social justice work as well as provided an additional community and pride for those with disabilities.

In spring 2014, Vice President for Student Affairs Todd Olson and Academic Resource Center Director Jane Holahan formed a working group on disability as a social justice issue. We are about to have our third meeting, and so far there has not been one concrete commitment to any changes, neither policy changes that require no funding to implement nor those with significant financial implications. The administration has consistently taken only the most minimal steps necessary to create the appearance of change while offering little of substance.

A large part of our reluctance to engage in disability issues stems from general ignorance of ableism on campus in addition to broader society. Students otherwise concerned with social justice frequently know little of the ongoing struggle to eliminate subminimum wage for those with disabilities, high rates of police brutality and criminalization of disabled individuals of color, legal structures that prevent the disabled (especially those who identify with the LBGTQ community) from exercising sexual agency and disabled parents from keeping their children, in addition to rampant medical abuses and widespread denial of life-saving treatment for those with disabilities.

Back on campus, Holahan told The Hoya last spring that she believes ableism does not exist at Georgetown.

“Are some people feeling that people with disabilities are being looked down upon? That people are being discriminated against?” she said.“I don’t see that. I will say that in respect to the individuals who might see that, that’s a perception they have, and I have to respect that perception.”

Quite frankly, it is appalling that the university official theoretically responsible for advocating for students with disabilities does not recognize the ableism underpinning every relevant issue.

In a November 2002 interview for the Voice, Holahan responded to disabled students’ criticisms by insisting that change is gradual.

“Not everything will be solved overnight,” she said.

Twelve years later, in a town hall meeting last week, Olson reiterated the same cop-out. Given the apparent attitude that vocal student activists’ departure after their graduation negates the need for permanent change, it is not surprising we have made frustratingly little progress.

Right now, our administration is capable of committing to both immediate and long-term changes to confront the ableism that deeply pervades our campus community:

First, commit to a firm timeline for a Disability Cultural Center, including space, financial and personnel considerations.

Fourth, reform involuntary medical leave of absence to eliminate the current closed-doors, coercive and discriminatory process and implement a student-centered, transparent process with room for negotiation.

The provost’s support for the first Disability Cultural Month, the formation of a working group and increased awareness of disability issues on campus are good signs. But these are only starting points, and real change must take place before Georgetown can claim to be genuinely committed to diversity and inclusion.

Lydia Brown is a senior in the College. She is the GUSA Undersecretary for Disability Affairs, and co-founder of the Washington Metro Disabled Students Collective.