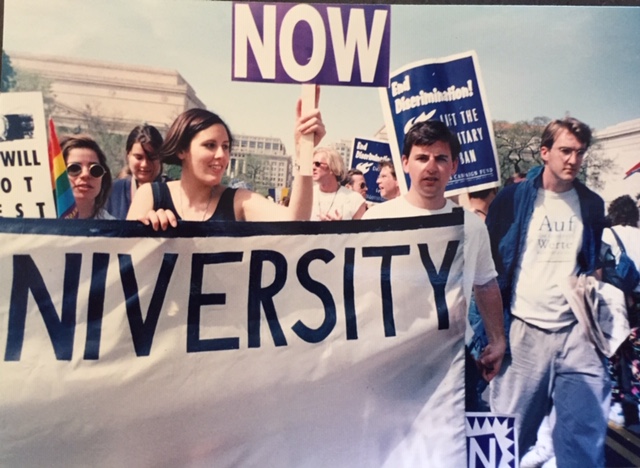 In fall 1988, The Hoya reached an inflection point. Just a year earlier, the paper had started printing twice a week, a decision that would last until fall 2017, doubling its weekly production and stretching editors’ capacity.

The Hoya had also just moved into the brand-new Leavey Center, barely finished when Georgetown University’s newspaper of record relocated to its Leavey 421 home, as Ed Walters (COL ’92) recounted. Walters, who served as news editor, editor-in-chief and chair of The Hoya, called the 1988-89 school year “difficult and transformative.”

Hoya editors spent the summer of 1988 moving out of their Copley Hall office and into Leavey 421, according to Mary Carroll Johansen (CAS ’88), who served as news editor and managing editor. Other than furniture, the Copley newsroom contained little to pack up except for The Hoya’s “wall of fame” — years worth of clips, cartoons and photos collected by generations of editors.

The move marked a turning point in The Hoya’s history: Merely a decade later, the paper had covered the election and later impeachment of an alumnus and, most importantly, developed thehoya.com. For The Hoya, the 1990s ushered in a new era.

Though The Hoya reported on daily on-campus happenings — from stories on facilities to controversies over the famed Healy Pub — two stories stand out as pivotal moments for Georgetown in the ’90s and underscore broader questions the Hilltop and The Hoya faced.

Early in the decade, the campus — and Hoya reporters along with it — witnessed the saga of GU Choice, the pro-abortion rights group that evolved into the modern-day H*yas for Choice.

The group, which initially called itself Hoyas for Choice, first met in 1989, kicking off a three-year tug of war that tested the limits of Georgetown’s Catholic identity.

H*yas for Choice originated as a forum for discussions about bodily autonomy but grew to serve more student needs for both information and supplies, according to HFC Communications Director Chloe Kekedjian (COL ’22). The organization’s independence from the university is a testament to members’ dedication, according to Kekedjian.

For The Hoya, tension about abortion rights peaked in 1989, when University President John J. DeGioia (CAS ’79, GRD ’95) — then dean of student affairs — prohibited The Hoya from printing an ad supporting abortion.

The conflict encapsulated questions surrounding Georgetown’s Catholic identity, according to Brian Wheeler (COL ’93), who served as managing editor and editor-in-chief.

“Pretty simple battle lines, right — it’s First Amendment freedoms, whatever you want to call them, versus the administration of a Jesuit university,” Wheeler said in a phone interview with The Hoya.

The Hoya eventually compromised with the university on the disagreement about the ad, but as Georgetown entered the ’90s, the uproar over GU Choice had only just begun. The club was quickly barred from using “Hoyas” in its name because the term was considered a trademark of the athletic department, according to a Washington Post article by Walters.

But DeGioia approved the club in 1991, allowing the group access to benefits to reaffirm the university’s commitment to open discussion, according to Walters’ Washington Post article.

The administration’s support of the organization, though, was short-lived. In April 1992, amid a canon lawsuit with the Catholic Church, then-University President Fr. Leo O’Donovan, S.J., (CAS ’56) revoked GU Choice’s recognition as a club.

GU Choice tested Georgetown’s commitment to its traditional Catholic values and a sense of inclusivity, according to Walters.

“I think Georgetown really had to walk a fine line, both in terms of maintaining its Catholic identity, but also being very supportive of students and building a community that was inclusive,” Walters said in a phone interview with The Hoya.

By 1992, the presidential election forced GU Choice to cede the spotlight to one of the university’s most famous alumni.

Bill Clinton’s (SFS ’68) campaign captured student interest regardless of their party allegiance, leading to events like rallies, debates in Red Square and election parties, according to Matthew Gobush (SFS ’94), who served as co-chair of Students for Clinton/Gore in 1992.

“You really felt like you had a front-row seat to history being made,” Gobush said in a phone interview with The Hoya. “The Hoya and the newspaper was part of writing that history, of how Georgetown and Georgetown students for Clinton helped one of our own become president. I can’t tell you how exciting it was.”

Clinton’s status as an alumnus gave students a more personal connection and encouraged them to get involved in politics, according to Gobush.

“Many of us identified with Bill Clinton, who was a student who wasn’t — he didn’t expect to be able to go to a school like Georgetown,” Gobush said. “We could see in his story our story, too, potentially, and what was possible. That’s what made it really exciting. He was a student just like us.”

The excitement continued in the months leading up to Clinton’s inauguration. As part of the inauguration festivities, the president-elect spent a day on campus, a significant event for students, according to Wheeler.

“The fact that you had a Georgetown graduate who was going to the White House was obviously a very big story,” Wheeler said.

The Hoya’s coverage of Clinton’s election was unprecedented: The paper, usually dedicated to covering campus news, reported on Clinton’s election and its aftermath to an extent unmatched until the 2008 and the 2016 elections. Clinton dominated the front page and opinion content for months before and after his election.

Just a few years later, as Clinton became the second U.S. president to stand an impeachment trial, The Hoya covered the events. Many students were hesitant to either forcefully condemn or support Clinton considering his status as an alumnus, according to Jim Di Liberto (COL ’00), who served as editor-in-chief and as the paper’s first online editor, a position that existed until 2014.

But The Hoya’s editorial board did not share this hesitance: On Sept. 15, 1998, the paper published an editorial with the headline “Time to Resign, Mr. President,” according to Miro Kazakoff (COL ’01), a member of the editorial board who went on to be managing editor.

“I remember it being very strange, but very cool; the national news sites, when they were talking about public opinion turning against the president, listing college newspapers that had called on the president to resign, and we were one of them,” Kazakoff said in a phone interview with The Hoya.

A decade of change in not only content but also medium, the 1990s marked The Hoya’s entrance into digital format.

The Hoya did not get its first computers until the late 1980s, according to Johansen. In 1988, the paper cut ties with the shop where the paper had previously been typeset, and editors began laying The Hoya in-house.

Still, The Hoya’s production process was incredibly laborious, according to Walters. Editors printed out articles in strips and precisely cut them to lay out the pages. Their goal was to submit the paper to the printer by 3 a.m., but they often did not finish until 7 or 8 a.m.

Shifting to digital layout was a key step in bringing The Hoya into the digital age, according to Jeff DeMartino (COL ’00), who served as news editor and editor-in-chief.

“When I started, we still had wax machines,” DeMartino said in a phone interview with The Hoya. “By the time I graduated, all of that was done digitally. We had a website. It was kind of like night and day over the course of four short years.”

Into the Internet Age

It was the birth of thehoya.com in 1998 that brought the now century-old institution to the internet. Editors recognized the value in having an online presence by the mid-1990s but faced difficulty in establishing a website for several years, according to Alicia Hunt (SFS ’96), who served as senior news editor and editor-in-chief and who created the first email address for The Hoya.

“I tried to get The Hoya a website, and we started developing one,” Hunt said in a phone interview with The Hoya. “We started putting one together, and the administration pushed back on it because it would be such public access that it wouldn’t just be limited to campus distribution.”

By the beginning of the 1997-98 school year, however, Hoya editors felt the paper needed a website. But in the early age of the internet, little institutional knowledge existed on how to build a website from scratch, and The Hoya struggled to find staffers with the necessary computer science expertise, according to DeMartino.

Throughout the spring and summer of 1998, a team of editors worked on early versions of the website — a team anchored by the famed filmmaker and “Westworld” creator Jonathan “Jonah” Nolan (COL ’98), according to Di Liberto and DeMartino. Nolan, who could not be reached for comment, helped develop an early version of thehoya.com and later served as online editor.

Yet another unexpected obstacle appeared near the end of summer 1998, thanks to a rival publication, according to DeMartino and Di Liberto.

“One of the things that was funny was trying to secure the rights to ‘thehoya.com.’ They were getting ready to secure the rights, and someone from The Voice went ahead and bought it, as a joke,” Di Liberto said in a phone interview with The Hoya. “I remember arguing with him at a party. And he eventually gave it back to us.”

“While I can not personally confirm the veracity of that story, it sounds like a great prank made in the spirit of the friendly rivalry that has pushed the Voice and The Hoya to be better as we have tried to outdo each other in every issue for the last 50 years,” The Voice’s Editor-in-Chief Noah Telerski (COL ’20) wrote in an email to The Hoya. “Also, if given the opportunity, I can’t say we wouldn’t try and pull that again.”

By October 1998, thehoya.com was up and running. But given the media environment of the moment, the newsroom still saw print as the dominant product, according to Kazakoff.

“In one direction, it was that the internet was the future,” Kazakoff said. “And the other direction was the feeling that people read The Hoya while they’re in class or doing other things — and how could they ever pull out a computer and read a newspaper in the middle of class?”

The Hoya’s newfound accessibility as an online publication introduced a daunting sense of responsibility, according to Di Liberto.

“We became really conscious pretty quickly that, once we were publishing online, anyone could go and read what we were posting,” Di Liberto said. “It’s really a much bigger megaphone than I think we ever would have anticipated.”

As The Hoya dramatically transformed its structure, one thing has stayed constant at The Hoya: The staffers in Leavey 421 are hard to forget.

“I remember the people more than anything else. I’m still friends with huge numbers of the folks who were at The Hoya with me. I’ve been in some of their weddings and some of them have been in mine,” Di Liberto said. “It was just a great group of people — you kind of have to enjoy spending time with them, with all those hours that you put into the office. That stands out more than any kind of story or anything we covered.”