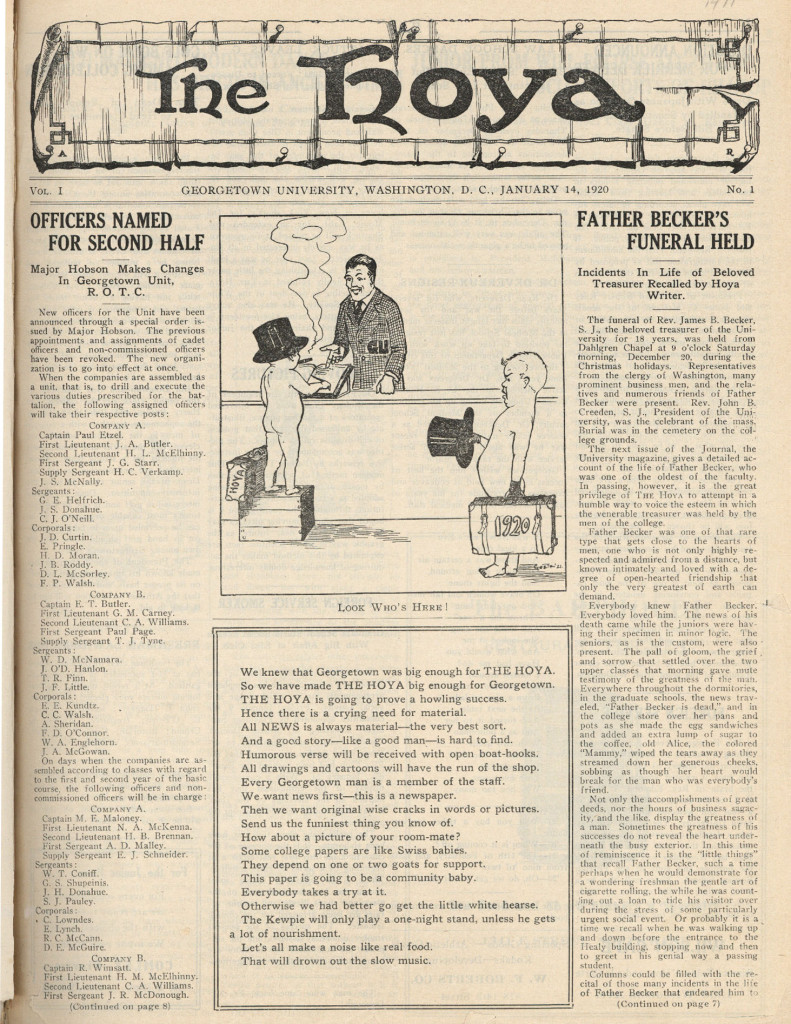 “Blushing as coyly as any schoolgirl, and with the excited fears and hopes of a debutante … we lay this first edition of
The Hoya at the feet of the
student body, and retreat to a safe distance to observe the
effects.”

This week marks The Hoya’s 95th anniversary; printed above is the newspaper’s 1920 founding message. While the current staff might not be “blushing as coyly as any schoolgirl,” we’re still excited to present this commemoration of The Hoya’s 95 years at Georgetown University.

The first issue of The Hoya was published Jan. 14, 1920, with its front page, above, covering the funeral of a beloved Jesuit, changes to the ROTC program and the founding of The Hoya itself. 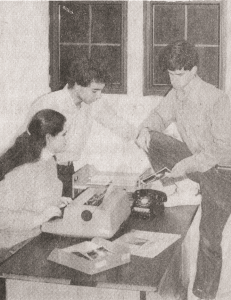 The Hoya followed a few iterations of campus publications, including a hand-copied pamphlet called “Minerva” that had been distributed around campus as early as 1824. However, it was the first publication that aimed to be a comprehensive Georgetown newspaper (although it at first focused on the College, and not the university’s other schools).

The Hoya’s early coverage centered around athletics — fittingly, as the newspaper took its name from students’ “Hoya Saxa” chant at football games. The use of the phrase for the newspaper helped spur the trend of calling Georgetown teams, clubs and students “Hoyas.”

The newspaper vacillated between writing about the influence of international events during World War II and the years leading up to it, and events happening on campus in the postwar years. In the 1970s and 1980s, The Hoya again broadened its scope to cover the influence of international events on student life, including the Vietnam War and protests against South African apartheid. 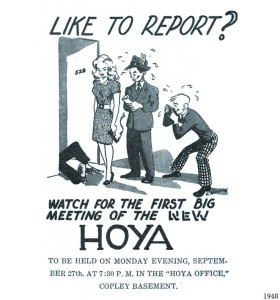 In its time on campus, The Hoya has covered some of the biggest stories and historical events of the 20th and 21st centuries, from the Civil Rights movement and the assassination of JFK to 9/11. At the same time, it has covered the news that is of significance to Georgetown, from the Hoyas’ win in the 1984 NCAA championships to each theft of the Healy clock hands.

The Hoya certainly does not represent an entirely comprehensive history of Georgetown, and its contents reflect the editorial priorities of each semester’s staff. But over the past near-century, The Hoya has witnessed many defining moments of the university’s, Washington’s and the United States’ history. This issue of The Hoya is meant to celebrate the role the newspaper has played throughout Georgetown’s history, and that history itself.