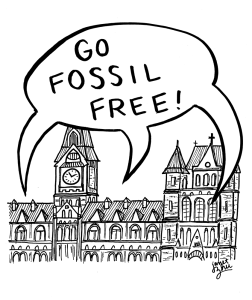 At Georgetown, we have an infatuation with the word “dialogue.” We hold it as an ideal, a diplomatic step that provides enlightenment about any given issue. But how do you create dialogue when people do not want to talk about an issue? How do you motivate students and administrators to take the time to care? In our recent work with the Georgetown University Student Association senate to pass a resolution in favor of our proposal to divest from fossil fuels, we in GU Fossil Free have come to understand the difficulty — as well as the importance — of encouragingdialogue to bring an issue to light.

After gaining momentum with community outreach, we were excited about the idea of a referendum at first. What is a more democratic way to show the administration just how many students favor divestment? As we began to talk to students about the referendum, though, we found that all of them still had complicated questions about divestment: how would it affect scholarships, what are the alternatives to it and what are we suggesting instead of investments in fossil fuels? All of these questions are relevant, reasonable and — most of all — they need to be answered. But even though we had research and experts to support our answers, we could not sit down and have meetings with each of the 7,000 undergraduates at Georgetown in order to answer these questions. It was not fair to ask them to vote in a referendum in which they did not have all the information or had not yet had all their questions answered.

Dialogue would have to be more intimate if we were going to discuss the nitty-gritty of divestment. We decided that we needed a small group of students with whom we could actually sit down and have those conversations. If we could show to an exemplary sampling of students our research, factual data and expertise, and convince them that divestment is a worthy tactic, then maybe we could convince the administration that our proposal was worth serious consideration.

We thus changed tack and decided to pursue a resolution through the GUSA senate whom you, the student body, elected to be your representative voices. Through this approach we were able to sit down with almost every senator for a meeting and talk through some of the truths and misconceptions about divestment from fossil fuels. The majority of them eagerly met with us and worked to understand the issue, processing the research and arguments from both sides.

But late last November, once we in GU Fossil Free had spoken on behalf of the group during the senate meeting, we sat quietly while the conversation shifted to debate between the senators. Suddenly the dialogue was not directed by GU Fossil Free but was taken into the hands of independent students. It was this aspect of the process that was so important. Although we had not yet been able to educate every single student, we had initiated dialogue among people other than ourselves. The votes were tallied, one by one, until the bill was passed by a vote of 17 to six.

No, the senate decision doesn’t mandate anything from the university. It is, however, a tangible resolution of the many conversations we have had with senators that came to the conclusion that divestment from fossil fuels deserves dialogue. And before we as a community make a decision about divestment, that dialogue needs to flourish.

As this spring semester opens, we hope that students see the senate resolution as a catalyst for increased dialogue about fossil fuel divestment. We implore all students, faculty and administrators to ask the important questions, look for the important answers and keep the dialogue going.

Caroline James is a sophomore in the College. She is a member of GU Fossil Free.