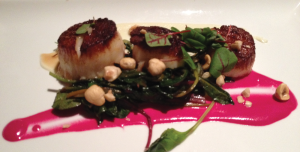 Starting on Wednesday night, I ate my way through parents’ weekend. While we indulged at a number of notable restaurants around D.C., Proof easily surpassed the others.

At first, my family and I were slightly skeptical when we stepped through the door. While we’d selected the restaurant based on The Washington Post’s rave reviews, we weren’t all that certain it would live up to the hype. The restaurant looks more or less like most other restaurants of that caliber — dim lighting, overpriced wine collection displayed in floor-to-ceiling glass cases and elegantly tasteful decor. But then Proof started to differentiate itself.

While we forewent the expansive range of charcuterieavailable to start the evening off, we mapped out the rest of our courses to sample everything we could. As a result, the first course was a carefully orchestrated round of plate passing, slicing and dicing to spread the culinary wealth around. I began with the spicy little meatballs which, true to their name, had a slight kick and were complemented by two goat cheese and ricotta-stuffed raviolis. While I was enamored with my own dish, I did have to ultimately vote for the duckconfit and scallion hush puppies as the winner of the first round. The dish featured a warm, tender duck leg rested atop a trio of scallion hush puppies dotted throughout with corn kernels. The hush puppies proved to be such a hit that we ended dividing them among our party of six.

The second course, featuring everything from a selection of scallops resting on a bed of beet emulsion to a deep-pink flat iron stake perched on an array of roasted fingerling potatoes, arrived almost immediately. I had ordered the suckling pig cavatelli, a bowl of cavatelli tossed with brocolliniand a sprinkling of pig meat in a cream sauce. Although I ordered the dish mostly out of curiosity, it was amazing, light and beginning to fray in the bowl of sauce. I had a hard time bringing myself to share. At our server’s suggestion, we also ended up with a bowl of caramelized cauliflower — cauliflower with lemon, tahini and mint — that was devoured promptly.

After we all ate the cauliflower like it were candy, we still couldn’t resist ordering dessert. We again aimed for variety, settling on the honeycrisp apple cobbler, sticky toffee pudding cake and warm chocolate hazelnut cake. I thought the apple crisp, with its walnuts and bourbon-vanilla ice cream, was good, if fairly basic and not nearly as strong or innovative as the main dishes, but an indulgence nonetheless. The chocolate cake, which managed to be irresistible even to those full from the other food, was accompanied by gianduja gelato and espresso sauce. The sticky toffee pudding cake even managed to surpass the popularity of the chocolate cake. The pudding was compressed into a long, narrow rectangle crowned by a thin sheet of almond paste that added a crunch to the pudding. The garnish on the top of the cake melted into the toffee.

While Proof certainly defines itself with the top-notch, innovative dishes, they find themselves on a whole new playing field when it comes to presentation, which was exquisite whether it was for the pan-roasted wild Alaskan Halibut or chocolate cake.

Next time you’re looking for a restaurant when your parents are in town or for an upscale date night, stop by Proof, but only if you plan on ordering the cauliflower and sticky toffee pudding cake.