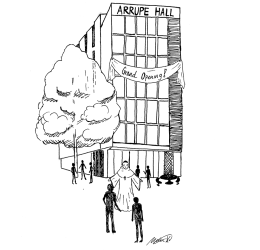 Our campus hearkens back to the past with the towering elegance of Healy Hall but also looks to the future with the sophisticated design of Regents. By opening a new residence hall on campus, we are perpetuating this relationship between the past and the future. This new campus landmark will have elements that remind us of both our university’s illustrious past and its vast potential. We need a name for this hall that reflects all of these tenets: our heritage, our mission and our bright future. The new hall, therefore, should be named for Fr. Pedro Arrupe, S.J., the 28th superior general of the Society of Jesus.

Arrupe’s story is a prime example of Georgetown’s mission of educating students in the liberal arts tradition to become women and men for others. Arrupe joined the society in 1927, focusing on the study of languages and medicine. After his ordination in 1936, Arrupe went to Japan as a missionary. There, he worked with the Catholic population through World War II, and he was in charge of the Jesuit novices near Hiroshima in 1945. When the atomic bomb fell on the city, Arrupe and his fellow Jesuits were among the first to provide emergency medical care in the city, throwing all notions of self-preservation away in order to help the victims of such terrible destruction.

Perhaps most pertinent to this proposal — and most famously in the life of Arrupe — is his July 1973 speech in Valencia, Spain, during which he extolled the meaning of one of the key phrases that adorns banners across campus:
“Today our prime educational objective must be to form men and women for others; men and women who will live not for themselves but for God and His Christ — for the God-man who lived and died for all the world; men and women who cannot even conceive of love of God which does not include love for the least of their neighbors; men and women completely convinced that love of God which does not issue in justice for others is a farce.”

This commitment to community is truly one of the motivating concepts behind Georgetown’s mission. Everything that we as students learn here, in some small way, is geared toward caring for our communities. Many pre-medical students take classes not just to learn how to properly care for patients, but to understand the critically important role health care plays in the welfare of communities around the world. Business school students take the “Social Responsibility of Business” class to learn to work in a way that benefits communities in addition to shareholders. These are just a few examples of ways that a Georgetown education is more than a vehicle for imparting knowledge; rather, it inspires students to use that knowledge to help better the world around them.

It is important, then, that the names of our residence halls — places where students spend the majority of their time, form communities and arguably learn just as much about life as in the classroom — serve as a constant reminder of the purpose of our university. We are a timeless Catholic and Jesuit institution, with deep roots in historical tradition and an eye toward the future; we remain wholly committed to the idea of women and men for others. The life led by Arrupe exemplifies these ideals. It is time that we as a university honor him and affirm our commitment to these values by naming the new residence hall after Fr. Pedro
Arrupe, S.J.

Patrick Musgrave is sophomore in the College. He is Georgetown University Student Association undersecretary for mission and ministry.