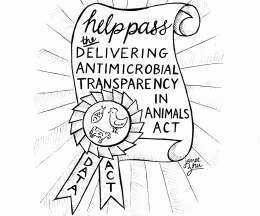 If there were a plane crash every day for the next year in the United States, would you be concerned? Would you demand that the government take action?

In 2012, nearly 100,000 Americans died from antibiotic-resistant infections. That’s more than 250 deaths — the equivalent of a fatal commercial plane crash — every single day. The U.S. Food and Drug Administration, Institute of Medicine and World Health Organization have all acknowledged that the growing number of antibiotic-resistant infections in humans is linked to the use of antibiotics in healthy livestock. However, the FDA does not collect or release enough information about antibiotic use in animals, which means that the public cannot monitor this growing problem.

That is why Congress must pass the Delivering Antimicrobial Transparency Act of 2013. This act, known at the DATA Act, will enhance reporting requirements for antibiotic use in food-producing animals and will make more details available to the public.

The FDA estimates that 80 percent of the antibiotics sold in the United States are used to treat animals. Livestock producers use low doses of antibiotics in animal feed to make livestock grow more quickly and to keep them healthy in otherwise unsanitary conditions. Although these antibiotics kill most of the bacteria in the animals, some bacteria may be resistant to the strains. With long-term antibiotic use, these more resistant organisms will increase in proportion.

This means that the next time the antibiotic is needed, it may not be as effective in treating what was once an easily treatable infection. While antibiotic-resistant infections in animals are worrisome enough, there is significant evidence that these infections can spread to humans through direct contact with animals, consumption of meat and cross-contamination of other food products.

Current law requires pharmaceutical companies to report sales information about antibiotics that are intended for use in animals. The FDA collects information on the amount of each antibiotic sold, as well as a list of animals that receive drugs and the approved ways each antibiotic can be used. But the FDA only releases a fraction of this information — in the form of gross annual sales data for each class of antibiotics.

Furthermore, a September 2011 study by the Government Accountability Office found that the data collected by the FDA did not contain enough details for scientists to analyze trends in antibiotic resistance. For example, the current reporting requirements do not require pharmaceutical companies to disclose which drugs are used in which animals — a crucial detail needed to trace resistant inkfections.

The DATA Act would bridge these gaps by requiring large farms to report the type and amount of antibiotics given to each food-producing animal every month. In addition, the farms would have to specify why each animal is given each drug and for how long. The DATA Act would also provide the public with better information about the use of antibiotics in livestock. In its public reports, the FDA would have to specify the percentage of antibiotics that are used in healthy livestock to boost production — versus the amount used to treat sick animals. Together, these details would allow public health officials to interpret trends in antibiotic resistance and to identify interventions to prevent and control the spread of these infections.

There are some concerns about the DATA Act. It may increase administrative costs for certain livestock producers, but because many of these farms already report similar information for fruits and vegetables, the increase would not be significant. Opponents of the legislation also argue that antibiotic-resistant bacteria in meat can be killed by safe cooking practices and therefore do not pose a threat to humans. But there are other ways that bacteria can spread from animals to humans, including direct contact and cross-contamination. Finally, while the threat of antibiotic-resistant infections may be mitigated by the development of new antibiotics, the rate of new drug development has slowed considerably over the last few decades. Since 1962, only two new classes of antibiotics have been developed successfully.

Without the information provided by the DATA Act, scientists and policymakers cannot assess the risk posed by antibiotic use in healthy livestock. But the bill is likely to die in the House Energy and Commerce Committee unless members know that the public cares about this issue. The health threat posed by drug-resistant infections is too great to be kicked down the road. On Monday, April 8 and Tuesday, April 9, we will be holding a phone bank on the fourth floor of Regents Hall to provide students, faculty and staff the opportunity to call their representative in Congress and ask them to support the DATA Act. We hope you will join us.

By calling your representative next week, you can be a part of saving countless American lives.