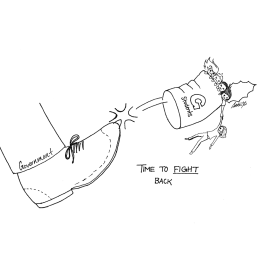 College students are well aware of the economic challenges facing our generation. Rising tuition is causing record student loan debt totaling more than $1 trillion. Here at Georgetown, 39 percent of students graduate with student loan debt. The average balance of this debt? $28,035. Unemployment among Americans between the ages of 20 and 24 is 13 percent — well above the national average. But the most threatening number to our American dream is one you may not have heard before: $200 trillion. That’s the true size of our national debt, and it’s up to our generation to defeat it before it defeats us.

When politicians talk about a $17 trillion national debt, they are referring only to debt our government has already taken on. What they don’t mention is the even more staggering debt burden our generation will face if current policy continues. Economists have estimated that burden, known as the fiscal gap, to be as large as $200 trillion. It takes into account the amount of money the government would have to take in today to fully cover the unfunded future costs of Medicare, Social Security, interest on the debt and other obligations. It is a tab far beyond our capacity to pay and it is a threat to our generation’s welfare that has no regard for party affiliation or political ideology.

If Washington keeps playing political games and continues to kick the can down the road, our generation will undoubtedly suffer. According to the Congressional Budget Office, under current policy, education, research and infrastructure investments will be at their lowest relative level on record by 2023. At the same time, interest payments on the debt will approach $1 trillion per year, an amount equal to 28 percent of total U.S. government spending in fiscal 2012. As The Washington Post’s Ezra Klein likes to say, the federal government is essentially an “insurance conglomerate with a large standing army.” In 2011, for example, defense and entitlement spending constituted 68 percent of a roughly $3.3 trillion budget, with expenditures on entitlements alone comprising $1.5 trillion — and the problem is getting worse. If current trends continue, by 2031 every penny of every federal tax dollar will go toward mandatory spending on programs like Medicare and Social Security. The disproportionate spending on entitlements and defense will leave us with the unacceptable choice of relying entirely on new debt to finance investments in our future or abandoning those critical investments altogether.

In order to solve this problem, we need to urge our leaders to put everything on the table. We need to reform our ballooning mandatory programs. We to need trim the fat from our defense budget. While no tax increase can feasibly cover our fiscal gap on its own, we need smart tax reform that unleashes economic growth and raises revenue. If we don’t take these steps soon, our generation will be left with more debt, higher taxes, fewer benefits and a lower standard of living.

As chairs of the Georgetown University College Democrats and the Georgetown University College Republicans, we may not always see eye to eye, but we agree that the status quo is not a viable option. The burden on our generation grows every day that this problem goes unaddressed. Current and future students will have to pay for the irresponsibility of our leaders. This is unacceptable, and it’s why we have joined together to welcome the Generational Equity Tour to campus this week. The tour is organized by the Can Kicks Back campaign, a non-partisan coalition of young people that advocates for a fiscally sustainable and generationally equitable federal budget.

The Can Kicks Back will culminate their cross-country campaign with a stop at Georgetown on Tuesday in Red Square during the day and a panel of speakers that night in Lohrfink Auditorium. We hope you take time to attend these events.

We have the most at stake in the debate about the federal budget and growing national debt. But our leaders in Washington won’t solve this problem unless we speak up. It’s time we all start fighting for our future together.