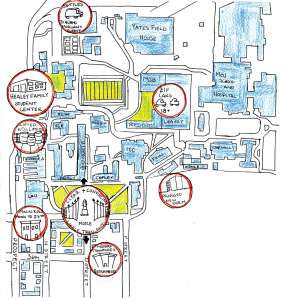 After town-gown relations reached a height of hostility during 2010 Campus Plan negotiations in the winter of 2011, the past year has seen efforts between the university and its neighbors to maintain cooperation after a compromise was reached this past summer.

The Georgetown Community Partnership, the brainchild of the university’s compromise on the campus plan, has ushered in a series of consensus-oriented committees populated by representatives of the university and local community.

“I think we’ve reached an agreement,” said Washington, D.C. Mayor Vincent Gray, who stood alongside University President John J. DeGioia and Advisory Neighborhood Commission 2E Chair Ron Lewis at the partnership launch June 6 after publicly supporting the neighborhood interests in the campus plan fight the previous October. “This is an extraordinary event in the life of our community, and it is very promising.”

Lauralyn Lee has been the institutional face of this new era of compromise since taking her post as the university’s associate vice president of community engagement and strategic initiatives early October.

“One of the things we’ve agreed on going into the partnership is a common set of goals,” Lee said at a Sept. 12 meeting with campus press. “We’ve identified some strategic priorities that we share, and … we’re asking everybody who’s engaged in the partnership to work toward the kind of community in which we want to live.”

Clara Gustafson (SFS ’13), former president of the Georgetown University Student Association, was appointed the student representative for the GCP steering committee Sept. 11 in response to GUSA efforts to ensure that the student voice was heard at the negotiating table. Since then, several students have been nominated to represent student interests in an array of GCP working groups.

“Vail [Kohnert-Yount (SFS ’13), then-vice president of GUSA] and I over the summer have literally been saying in every meeting with every administrator, no matter who they are or if they’re related to the GCP, that having a student representative on the GCP is of the utmost importance and is a symbolic step toward establishing the students as a legitimate party in our immediate and neighboring community,” Gustafson said at the time of her appointment.

Local government representatives once known for lambasting the university’s approach to neighborhood relations were quick to welcome the new era of cooperation.

“What is really new is that [we are] in partnership with the highest levels of the university,” Commissioner Ed Solomon said at the ANC 2E’s September public meeting. “This is result-oriented. A new day has come. The university has a lot invested, and we have a lot invested.”

In reality, the new era of compromise has been defined by a variety of concessions on the part of the university, many of which have benefited both neighbors and students.

Soon after the GCP was formed, Georgetown’s Vice President for Student Affairs Todd Olson lifted the registration requirement for on-campus parties, signaling the first in a series of reforms aimed at reducing the infiltration of rowdy students into surrounding neighborhood streets. Chief among these changes was the March launch of a weekend shuttle service to Dupont Circle and Adams Morgan, in addition to the buses that have been servicing M Street and Burleith since fall 2011.

“We want to encourage student social life in safe and legal ways on campus and believe this change will help accomplish that goal,” Olson wrote in an email circulated to Georgetown students announcing the elimination of the registration requirement.

However, the concessions have also come in the form of a redoubled university effort to exercise its disciplinary policy for off-campus violations. Gustafson confirmed Feb. 28 that the university was planning a crackdown on noisy off-campus parties for after spring break, a move that did not surprise Student Advocacy Office senior advocate Constantine Petallides (SFS ’13).

“The reaction is, on one hand, it’s a bit arbitrary and unfair, and [on] the other, the university is doing what it needs to,” Petallides said. “There’s no solution that will make everyone happy all of the time.”

But students scored another victory Oct. 18 when Olson announced that the evidentiary standard against which student violations of the Code of Student Conduct are judged had been raised from “more likely than not” to “clear and convincing” for all offenses committed on campus except sexual assault. The announcement came after about 98 percent of the more than 2,600 students who voted in a GUSA referendum supported the shift and Olson’s office commissioned an external review of the disciplinary policy.

Associate Vice President for Student Affairs Jeanne Lord added that the university would undertake a separate external review to assess the feasibility of a similar change for off-campus violations, though the likelihood of such a shift remains uncertain.

The trend continued when the university moved to abolish the one-keg limit for on-campus parties April 18. The policy change came just days after GUSA — whose new leadership under President Nate Tisa (SFS ’14) and Vice President Adam Ramadan (SFS ’14) has recognized adaptation to the campus plan agreement and student life on campus as a priority — adopted a resolution urging the university to consider relaxing the limit.

“We were working to make sure, in response to the campus plan, we keep the vibrancy of Georgetown social life alive, even if it means keeping it on campus,” Tisa said of the student association’s advocacy of the policy change. “It will allow on-campus life to be much better.”

Most notably, the center, which is slated to open in fall 2014, includes plans for a pub that will serve alcohol to patrons over 21 from Thursday to Saturday during hours comparable to local bars and feature 18-plus events to accommodate the wider campus population.

“The hope is that the student center is a way for [all students] to be themselves in a safe and exciting space where they don’t have to go very far, and they can hang out and order a beer, a glass of wine or just a snack,” said Gustafson, who signed a Feb. 7 memorandum detailing plans for the center along with Kohnert-Yount and Olson.

The university’s approval of the pub came just 18 months after student efforts to reinstate Healy Pub were quashed by the administration.

Meanwhile, in light of its campus plan commitment to house 90 percent of undergraduates on campus by fall 2015 and cap enrollment numbers on its main campus, the university has begun exploring numerous options for growth both behind the front gates and beyond.

The university also announced in September a master plan for expansion, which includes the consolidation of the School of Continuing Studies into a Georgetown Downtown — a  91,000-square-foot facility in Mount Vernon Square purchased last summer — and the search for a site in the District of Columbia of about 100 acres to accommodate future growth of core graduate programs. The exact nature of the expansion remains uncertain.

After an earlier plan to convert the Leavey Hotel and Conference Center into dorms proved unworkable, the university unveiled a proposed dorm to be located across from Reiss Science Building, among six other possible sites, at a March 19 planning session. The plans, which call for a triangular building with glass facades, were met with some criticism, including from Yates Field House Director Jim Gilroy (CAS ’72).

Magis Row, a series of student townhouses oriented toward campus groups, will be relocated from the 1400 block of 36th Street to the block of 37th Street facing the front gates by this fall. The townhouses that previously composed Magis Row will be renovated to accommodate faculty and staff housing and administrative offices.

With these changes, the university and its neighbors will have to adapt to a new dynamic.