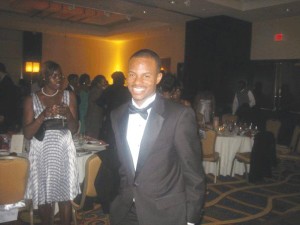 Terrance Davis (COL ’10) always said his greatest wish was to go to Africa. This fall, that wish came true, as he traveled to South Africa to spend his semester at the University of Cape Town.

In early September, Davis and friends traveled 275 miles east of Cape Town to the coastal town of Harkerville for spring break.

On the morning of Sept. 1, Davis and fellow Georgetown student Ellie Gunderson (COL ’10) were walking along a rocky beach when Davis decided to continue along the rocks into deeper water and was swept away by a rogue wave. He was declared missing and later presumed drowned, with officials having not yet confirmed that they have recovered his body.

Since his disappearance, Davis’ friends and family have held vigil both at Georgetown and in Cape Town to pray for Davis and to comfort each other with fond memories of his love for life and God.

Students, faculty and staff gathered at Georgetown as early as the night of Sept. 1 to hope, pray and celebrate the life of the 20-year-old they repeatedly called “a blessing.”

A funeral service for Davis will be held this Saturday at Pleasant Grove Missionary Baptist Church near his hometown of Osceola, Ark., where Davis’ mother and grandmother live. Next Thursday, the Georgetown community will hold a memorial service of its own at 4 p.m. in Gaston Hall.

Although his immediate family chose not to comment, Davis’ cousin, Shari Nicole McClendon, said his family was stunned when they heard that he was missing.

“It was just a real shock for our family,” she said. “I told my family, `This is not the end. Terrance will come home even if it’s not the way we want it, he’s coming home just because it’s Terrance, and he wouldn’t leave us like this.'”

As family and friends waited for updates on Davis’ condition, they were held together by the strong Christian faith that was so fundamental to Davis.

“Terrance was a man of radiant faith and hope,” Fr. Philip Boroughs, S.J., said at a prayer service for Davis last week.

“He really loved God,” Obehi Utubor (SFS ’09) said. “The boy just came from Arkansas and made a point to express his love for Jesus Christ in really outward ways.”

“Terrance was a man who loved life and he loved God and he loved praising God,” Reverend Constance Wheeler, Protestant chaplaincy director, said.

Even in the moments preceding his accident, Ellie Gunderson (COL ’10), who was with Davis at the time, said he was continuing to spread his love of God and delight in life.

“I was talking to . Gunderson, and she said that on the way down to the beach, he was reading his Bible, and as he was walking down to the rocks, he was singing gospel hymns,” Brian Kesten (COL ’10) said.

Even those who were not well acquainted with Davis remembered the power of listening to him sing with the Gospel Choir at Georgetown.

“My favorite thing about Terrance is his voice,” Yvette Badu-Nimako (MSB ’10) said.

Friends called Davis “the heart and soul” of the Gospel Choir, though his singing wasn’t limited to just the choir.

“Once he serenaded me on my 20th birthday,” Utubor said. “He was wearing a tux and one of those crowns from Burger King, and he just made up a song on the spot, and once in a while he’d put in a random quotes from the Temptations.”

But what made Davis’ faith truly exceptional was that he translated his love for God into a love of everyone around him. And so he greeted everyone – friends, teachers, and, many times, total strangers – with his infamously named “Terrance Hello.”

“It didn’t matter who you were, he loved you because he loved God,” Utubor said.

Andy Marte (COL ’11) remembered meeting Davis on the first day of classes as a Community Scholar.

“Terrance entered a theology course that [we] were in and went around the room and gave everyone a hug,” he said. “My second encounter with Terrance, he screamed my name from across the Healy Lawn and gave me a hug. The third time I saw him, he gave me a hug.”

“As you may notice, Terrance was a very loving person,” he added. “A person that gave everyone hugs and made everyone feel special and a party of the bigger Georgetown community.”

“He would always shout my name,” another student said at a prayer service. “He always made me feel like a superstar.”

One professor called him a “breath of fresh air” at the service.

When friends would ask how could be so affectionate and so excited all the time, Davis used to say that the “Terrance Hello” was meant to be a reminder not only of his love for people, but of God’s love for everyone.

Back home, Davis was “the sunshine” at Osceola High School.

“No matter how bad your day was going, he was the only one that could cheer you up,” said high school friend Indoneshia Hayes. “He was always kissin’ on you, but you could never get mad. . He was like a guardian angel and everyone who knew him loved him dearly.”

“Terrance was a very intelligent young man throughout his life, and he was very spiritual,” said Unika Washington, who grew up with Davis. “He also had a smile on his face no matter what he was going through in life.”

That contagious smile beamed with friends, in worship and in his love of music.

Davis began performing at a young age, when he joined a singing group in his hometown of Osceola.

“It was called John 3:16,” McClendon said. “They would try to sing, but their voices hadn’t yet reach puberty so they sounded like grown kids.”

McClendon said that his family in Arkansas always told him how proud they were that he was accepted to Georgetown.

“It’s hard for a young man to get away down here – he just went above and beyond,” she said. “He just gave 110 percent.”

Aside from his love for spirituality, before going abroad, Davis also served as director of publicity for The Fire This Time, Black Ensemble Theatre and Black Student Alliance. In addition to the Gospel Choir, he was actively involved in a peer mentorship program, the Georgetown chapter of the NAACP, Movements of Grace, and Black Movements Dance Theatre, a joint program between Georgetown and the Duke Ellington School of the Arts. He began his semester in Cape Town in mid-July after working as an intern for Sen. Mark Pryor (D-Ark.) in his Washington, D.C. office.

At Georgetown, Davis was a performing arts and sociology double-major who was very actively involved on campus, particularly in student productions.

“The first time I met him, we were auditioning for `The Gospel at Colonus’ in the fall of 2006, and we were auditioning, and we didn’t know each other, and Terrance would just come up to me, and he said he could tell that I was nervous, and even though he didn’t know me, he just gave me a big hug,” Badu-Nimako said. “From then on, he really pushed me, and gave me the courage to do the audition.”

“He was just that kind of person,” she said. “He was encouraging.”

Kevin Bowles (COL ’09), who directed “The Exonerated,” in which Davis played David Keaton, a real-life individual who was sentenced to death for a crime he didn’t commit, said Davis was a powerful force on stage.

“One of Terrance’s lines was about struggling with faith and trying to hope in a world that seemed so hopeless, and every night, when he said, `You gotta focus on finding that light, that light within … ’cause that’s all you really got, you know?’ I swear I got chills, every performance, every time he said it.”

Bowles said Terrance brought love and intense energy to everything he did. “He would whoop and holler and sing and shout at the most inappropriate times, but it never seemed to bother anyone,” he said.

Friends remembered Davis’ energy extending to everywhere he went, even to Lauinger Library.

“He always gives energy – even when it’s 3 a.m. and he was still in the library, he would just come up to people full of energy,” Badu-Nimako said. “I never actually saw him do work in Lau, but he always got everything done and he always got good grades.”

Friends said one of Davis’ greatest gifts was the hope he gave to everyone he knew.

“I think the biggest thing I learned from Terrance is that there is always hope,” Emmanuel Hampton (COL ’11) said. “Terrance always made me see that even though at times, things seemed bad, the time that we have now, the life we have now – we were blessed.”

Correction: The original story misstated that a funeral mass was held for Davis; it was actually a Baptist funeral service.

After Tragedy, Uniting for Support September 5, 2008