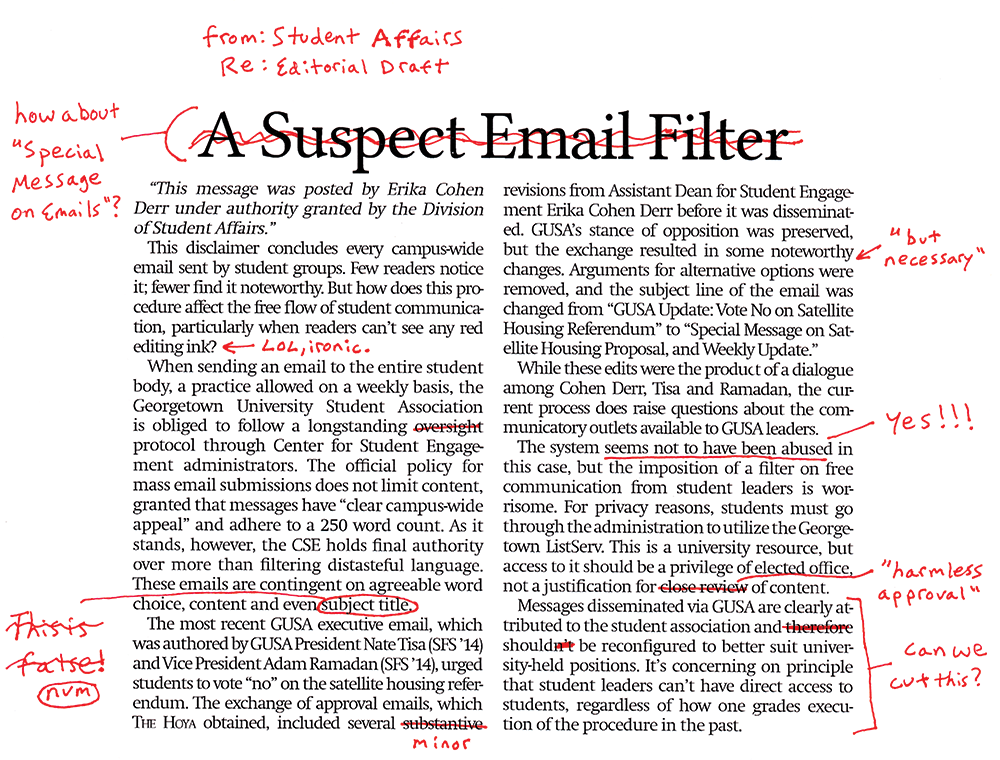 “This message was posted by Erika Cohen Derr under authority granted by the Division of Student Affairs.”

This disclaimer concludes every campus-wide email sent by student groups. Few readers notice it; fewer find it noteworthy. But how does this procedure affect the free flow of student communication, particularly when readers can’t see any red editing ink?

When sending an email to the entire student body, a practice allowed on a weekly basis, the Georgetown University Student Association is obliged to follow a longstanding oversight protocol through Center for Student Engagement administrators. The official policy for mass email submissions does not limit content, granted that messages have “clear campus-wide appeal” and adhere to a 250 word count. As it stands, however, the CSE holds final authority over more than filtering distasteful language. These emails are contingent on agreeable word choice, content and even subject title.

The most recent GUSA executive email, which was authored by GUSA President Nate Tisa (SFS ’14) and Vice President Adam Ramadan (SFS ’14), urged students to vote “no” on the satellite housing referendum. The exchange of approval emails, which The Hoya obtained, included several substantive revisions from Assistant Dean for Student Engagement Erika Cohen Derr before it was disseminated. GUSA’s stance of opposition was preserved, but the exchange resulted in some noteworthy changes. Arguments for alternative options were removed, and the subject line of the email was changed from “GUSA Update: Vote No on Satellite Housing Referendum” to “Special Message on Satellite Housing Proposal, and Weekly Update.”

While these edits were the product of a dialogue among Cohen Derr, Tisa and Ramadan, the current process does raise questions about the communicatory outlets available to GUSA leaders.

The system seems not to have been abused in this case, but the imposition of a filter on free communication from student leaders is worrisome. For privacy reasons, students must go through the administration to utilize the Georgetown ListServ. This is a university resource, but access to it should be a privilege of elected office, not a justification for close review of content.

Messages disseminated via GUSA are clearly attributed to the student association and therefore shouldn’t be reconfigured to better suit university-held positions. It’s concerning on principle that student leaders can’t have direct access to students, regardless of how one grades execution of the procedure in the past.