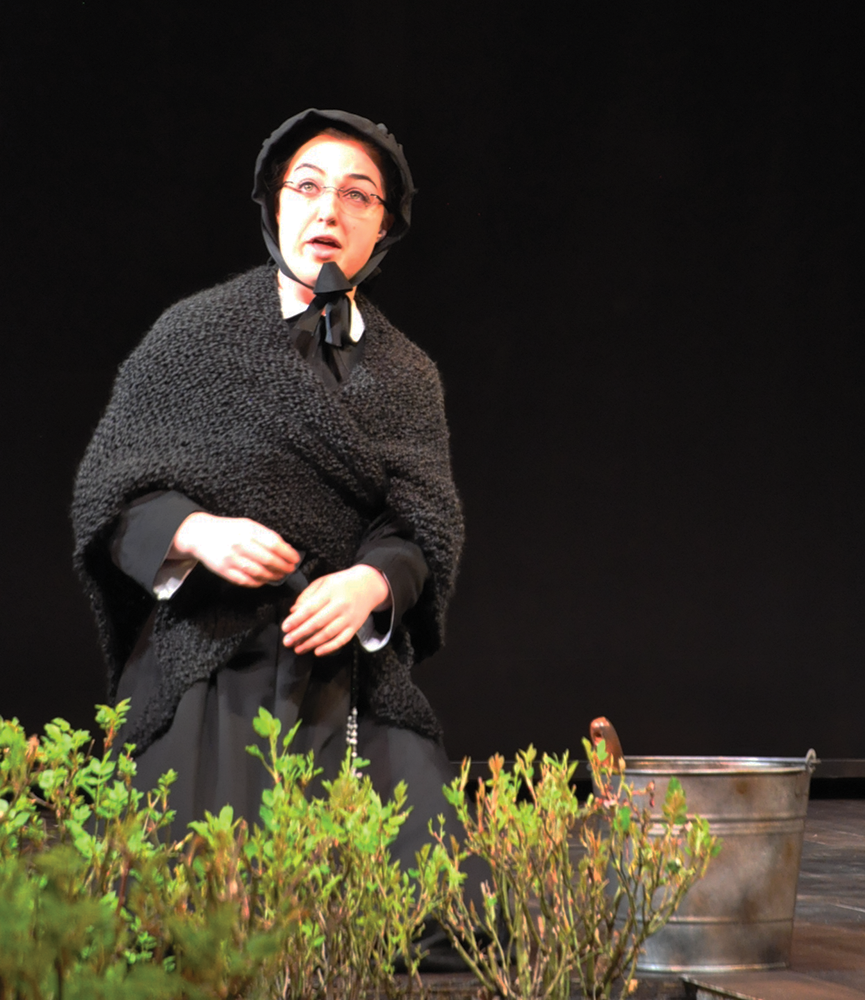 Whether one wears a habit or a hoodie, a person cannot avoid suspicion, and in the absence of proof, none can escape doubt. Such is the struggle of Sister Aloysius Beauvier in her mistrust of Fr. Brendan Flynn in John Patrick Shanley’s “Doubt, A Parable,” which opens this weekend at the Davis Performing Arts Center’s Gonda Theatre.

“Doubt,” which was originally staged off-Broadway at the Manhattan Theater Club, premiered on Broadway in 2004, won the Tony Award for Best Play and the Pulitzer Prize for Drama and was adapted in 2008 to a film starring Meryl Streep and the late Philip Seymour Hoffman. “Doubt” has the power to haunt audiences, and this production — despite its perhaps unnecessary stress on Flynn’s obscurity — will undoubtedly do just that.

“Doubt” takes place in a fictional school in the Bronx during the fall of 1964. The play begins with a sermon by Fr. Flynn that addresses the issue of uncertainty and effectively lays the foundation for the remainder of the performance. Coinciding with the arrival of St. Nicholas Church School’s first African-American student, Principal Sister Aloysius has begun to suspect the actions of Fr. Flynn of scandalous misconduct due to mysterious meetings between the student and Flynn . The theme of gossip plays a major role in the play, conveying how suspicion and secrecy can taint reputations and how powerful rumors can be. Confident and charismatic, Flynn has gained favor in the church community, but a peculiar incident leads Aloysius to believe that Flynn has abused Donald Muller, the African-American boy.

In Aloysius’ pursuit against Flynn, it remains unclear with whom to place support, condemnation and belief. The clash of personalities and the tensions that result from the struggle give the play a unique quality that leaves the audience on edge throughout, since they are drawn into the drama, unsure of which character they are supposed to believe. Tied in with a religious theme, it poses interesting questions about how far we can trust those we generally deem honest.

As Sister Aloysius, Maddie Kelley (COL ’16) gives a stunning performance. Originally played by Cherry Jones and mastered by Streep, the role has a daunting history, and Kelley, rather than crumbling, only adds to this group of bold performances. She packs her character with restraint and intensity, and almost miraculously, she transforms herself into the unbending Aloysius, her body and voice aging 40 years in an effortless manner. This is a complex and challenging role to play, and Kelley does an excellent job in giving depth and vitality to the character.

Continuing with “Doubt’s” possibility for differing interpretations, professor Maya E. Roth, who is the director, chose to cast two actors as Fr. Flynn who will alternate shows. For the production as a whole, this decision emphasizes well the questions asked in “Doubt.” However, the two characterizations of Flynn are presented as near opposites, which underscores the play’s element of uncertainty.

On one extreme, Flynn, as portrayed by Addison Williams (COL ’14), who played the titular role in “Hamlet” last semester, begs for compassion. If he is hiding guilt, he has hid it in place where even the audience has trouble finding a trace of it. Clearly a gifted performer, Williams acts with passion, but his interpretation of Flynn restricts how skeptical one can be. Caleb Lewis (COL ’16) does a solid job in providing a rougher, more aggressive Flynn who fights back against insinuations and accusations. Each actor showcases great skill, but if one sees both versions, it might be hard to avoid assuming that one Flynn is definitely guilty while the other is purely innocent.

Williams believes that the different style of the two actors means that ideally, the audience should see both performances.

“We didn’t see each other perform until last week, and I think that it was important because we really developed independence from each other. I don’t want to define our two performances, but I think his is a little snappier… We’re definitely leaving it to the audience,” Williams said.

He also thinks that having two actors as Flynn makes the shows very different, and not just because they themselves give different performances.

As Sister James, a teacher who becomes entangled in this situation, Elizabeth-Burton Jones (GRD ’15) exhibits complete innocence. With this comes some naivete, but Jones never gives an impression of being foolish. And although she only appears briefly, Marlene Cox (COL ’16) also makes an impact, playing Mrs. Muller in a powerful scene.

Providing a beautiful space for its actors, the set of “Doubt” uses the stage wisely. While minimal and muted, it creates distinct spaces and cleverly highlights the importance of religion in the play; a garden in the shape of a cross remains center stage.

According to Williams, the main challenge of the play was understanding the historical context, which meant that research was of vital importance.

“It was always going to be a challenge because of the period. Given its in 1954 … [and] how the world was moving away from the church .… Most of the cast members had had experience with the Catholic Church through high school or family,” Williams said.“I hadn’t, so I had to do a lot of learning about Catholic practices, church structures as well as the times — it was just after the Kennedy assassination. So just contextualizing historically, socially … that was important.”

Planting the seeds of uncertainty, “Doubt” refuses to give answers. “Doubt” should be at the very least frustrating, and since this production — filled with excellent performers is maddening — it has done its job well.