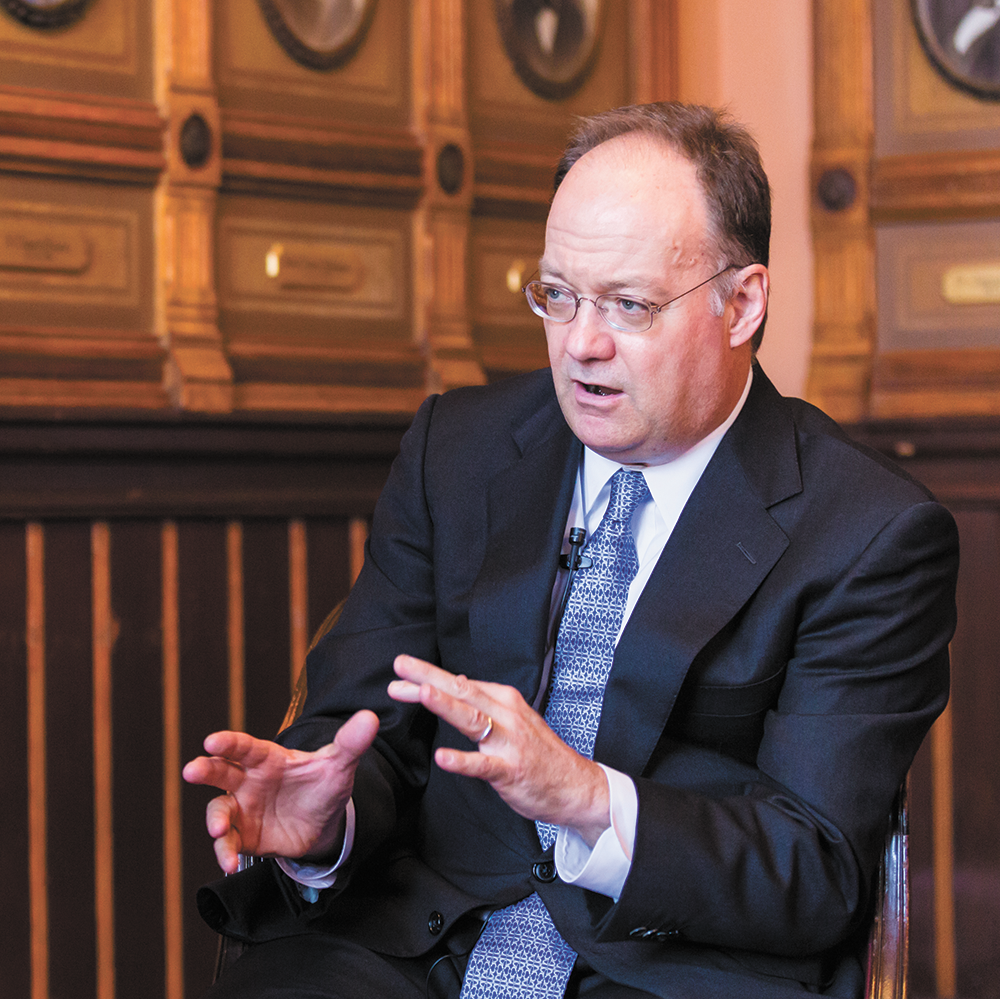 University President John J. DeGioia has spent virtually his entire adult life on the Hilltop, and under his leadership, Georgetown has launched two major fundraising campaigns, expanded campus facilities dramatically and adapted academics to the new millennium. But PresidentDeGioia doesn’t do many interviews, and we were pleased to finally speak with him March 4 and address an accumulation of questions from a year’s worth of headlines.

Below is an abridged transcript. The complete video can be found here.

There’s that very memorable photograph of the three-way handshake between you, Mayor Gray and the community leader Ron Lewis after the 2010 Campus Plan agreement was reached in the summer of 2012. But in seeing the aftermath across so many areas of campus life, is there any denying that students were on the losing end of that bargain?

I would never characterize it that way. We actually have had the most positive working relationship with the neighborhood during my years at the university, going all the way back to my student years. We are able now to move forward and continue our efforts to expand on-campus residential capacity with the new Northeast Triangle and renovation of the old Jesuit Residence. That agreement enables us to strengthen the student experience and have a clear framework for growth.

Maybe the biggest story on campus this year has been the possibility that an undergraduate dormitory would be acquired several miles off campus, and there was overwhelming disapproval from students and recent alumni upon hearing that news. That plan has been scrapped for now, but where did you stand on the satellite residence?

We’ve had them before. During my undergraduate years we had one right on Massachusetts Avenue — Alban Towers, it was called. We had between 800 and 900 students living there. It was never ideal, and when we had the opportunity to build more on-campus housing and sell Alban Towers we did so. We were looking at a range of options. Our preference was always to find on-campus possibilities, and we needed to do the work to be able to determine if we could fit a residence hall next to Reiss; could we convert the old Jesuit Residence. Pieces of that puzzle weren’t clear.

In November, you unveiled your Defining the Future of Higher Education Initiative. At that time, you noted that higher education is at a critical turning point, but you also said that it may have lost its way recently, including at Georgetown. What did you mean by that?

The key point that I was trying to address was this question that in the face of unprecedented challenges in our lifetimes to the traditional model for higher education, how do we understand those challenges as potential opportunities? What is it that we have to protect, and what is it that we need to engage? There are three elements of the university that must be understood and protected: the formation of students, the inquiry of our faculty and the commitment of the university to contribute to the common good. Those three elements are inextricably linked, and one of the mistakes that’s being made right now is the idea that you might be able to isolate pieces of this from the other elements.

There seems to be a growing emphasis among students on the pre-professional aspects of a Georgetown education. Is any reform needed to counter that career-oriented approach to academics?

On the one hand, we fully recognize the interests of our students entering an ever-more complex workforce, and there are some core skills that it would be great if we could ensure that they pick up while they’re here. The question we’re wrestling with right now is does that have to happen in our traditional curriculum? I joke that we offer the minor in the College in business just to bring peace to the Thanksgiving dinner table, so that anybody going home with an English, theology or philosophy major could be able to say to their folks, “Well, I got this covered.” The idea that we’ve got to find the right balance is very important for the lived reality of our students.

The cost of attending Georgetown has more than doubled since you took office. Do you fear that barriers are only getting higher to studying on the Hilltop?

It’s never been more challenging for us to ensure that anybody who wants to study here can study here. In 1978, it cost us $2 million to meet the cost of our full-need financial aid policy. This year, it will cost us $107 million. We’ve sustained the policy, and it still sends the signal to students anywhere in the country that this a place that’s realistic and affordable.

When you think about people like Edward Bunn, Francis Healy and Joseph Lauinger, who are immortalized around campus, does someone like Frank McCourt, who has faced serious criticism for the way he accumulated his fortune, belong in that company?

Frank McCourt is from a three-generation legacy family at Georgetown. His contribution came from a life of hard work and engagement. He felt it appropriate to give back to the university at this time in his life. I recognize that there was lots of public criticism of Mr. McCourt, but none of that in any way should result in a criticism of his generosity to support the mission of this university.

You had a prominent role in Big East realignment. Last fall, Dean of Undergraduate Admissions Charles Deacon told me in an interview, “From an institutional basis, the only negative is that we are probably taking a step backward in the national spotlight.” As important as basketball has been for growing our national reputation, is there any concern the new arrangement could diminish that?

The only way it will be a step backward is if the Big East doesn’t play basketball at the highest possible level. This season is a good indication that this a group of schools that will be able to play at the highest level. We can just give it a little bit of time.

At your inaugural address in 2001, you identified the tension between Catholic values and the practices of the academy. As president, what has been the most challenging instance when you’ve had to navigate that tension?

I suppose the most public, and significant challenge, was dealing with the implications of the Affordable Care Act. We wanted to be sure that we had fidelity to the deepest values that have animated this university for 225 years.

If you were in a position to choose your successor, and after reviewing all the candidates, the most qualified person happened to be gay, would he or she get the job?

I can’t imagine that our board of directors would discriminate for any candidate regardless of the criteria.

So that’s a yes, potentially?