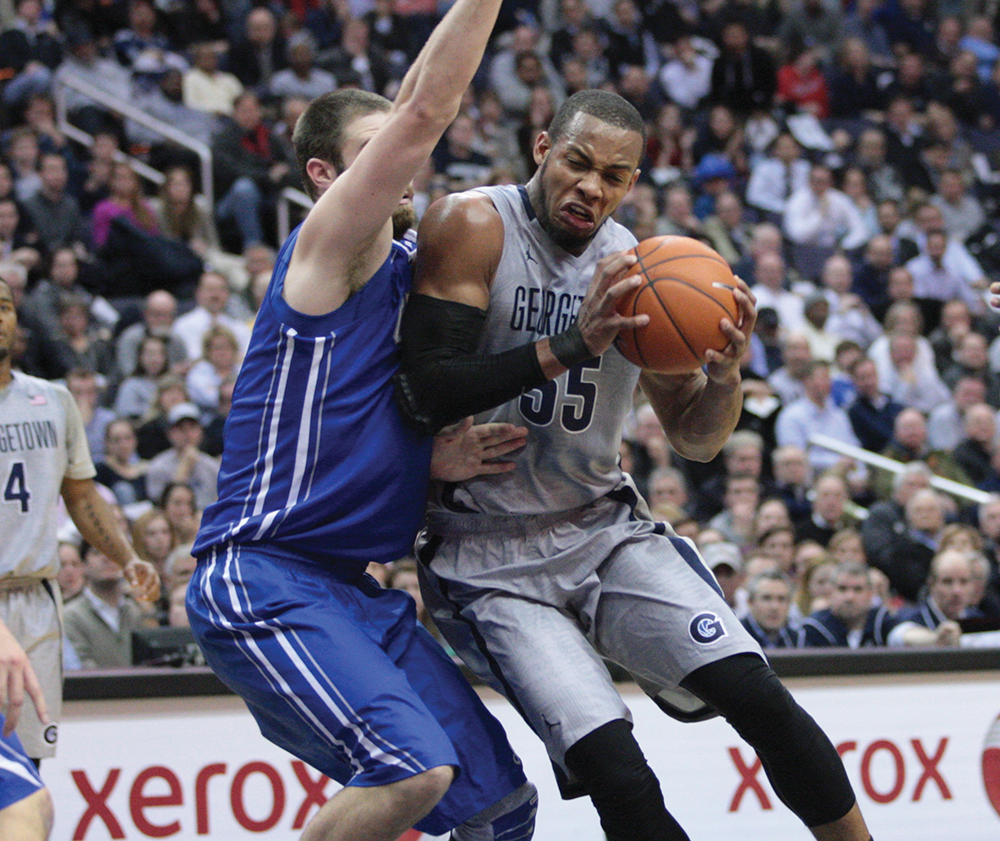 If you took the collective pulse of the Hoyas at Midnight Madness 2013, a few weeks before the beginning of their season, the only justifiable outlook would have been one of relentless positivity.

Yes, reigning Big East Player of the Year Otto Porter was now off to the greener pastures of the NBA, and the still-ongoing sagas of junior forward Greg Whittington (injury) and junior center Josh Smith (transfer eligibility) casted a cloud of doubt over the season. But as a whole, the team seemed poised to make some noise come postseason time.

Senior guard and team leader Markel Starks (COL ’14) was finally ready to hang that Final Four banner he so craved. Fellow senior Nate Lubick (COL ’14), a four-year starter, was alongside him — handed one last opportunity to shed that “coach’s son” label and take the next step. Sophomore guard D’Vauntes Smith-Rivera, fresh off a highly encouraging freshman season, seemed poised to explode in his sophomore year. Junior guard Jabril Trawick, a defensive stalwart, had the chance to become a two-way dynamo.

We knew the big guns the Hoyas would be bringing into battle. What made last year so promising was the presence of what seemed like a bevy of complementary players who could form the “missing pieces” of the championship puzzle.

Junior forward Mikael Hopkins was around to swat shots and grab rebounds. Senior center Moses Ayegba (COL ’14) was there to hold his own down low. Senior forward Aaron Bowen, the high-flying wing, was a highlight-reel dunk waiting to happen. And, we hadn’t even considered forward Reggie Cameron, the lone freshman, or the drool-worthy potential of Smith, the first McDonald’s All-American to play for the Hoyas since Greg Monroe. Head Coach John Thompson III seemed just as enthused with the prospects of last year’s team.

“Last season at this time … we were talking about cutting down the nets,” he said candidly at media day 2014.
The 2013-14 Hoyas had studs. They had depth. They even had newcomers (and the possibility of a mid-season return for Whittington after an ACL injury) to bolster the core further. Things never meshed, however, as a variety of off-court issues coalesced with on-court inefficiencies to make it a year to forget for the Blue and Gray.

In a hard-fought opening loss to the No. 19 Oregon in South Korea, Starks and Smith played monstrous games, but a second-half disappearance from Hopkins and a dud from Smith-Rivera doomed the Hoyas. The tone was set for a rollercoaster year. After a pit stop for a home victory over mid-major Wright State University, Georgetown travelled to Puerto Rico. There, it suffered a dumbfounding loss to Northeastern University, but it rebounded with a fast-paced win over No. 10 Virginia Commonwealth and a pounding of Kansas State University. The Hoyas stood at a respectable 3-2, but it was difficult to discern any trends from their performances.

After a quartet of home games against weaker competitors, the next few weeks looked to provide some respite from the early-season chaos. The Hoyas seemed unfazed in those next four games, winning all of them en route to a solid 7-2 record. But, the major headlines of the season had just started: Whittington had been dismissed from the program for academic reasons. While Whittington was never sure to even return from injury last year, his dismissal was a sobering reality — the Hoyas now had one less card in their deck.

Worse yet, there were underlying issues with Georgetown’s early results. First was the concerning trend of Starks, Smith and Smith-Rivera being unable to put together coinciding quality performances. Second, and just as important, was the sheer absence of production from nearly everyone else on the roster.

Lubick and Trawick averaged just six points per game in those late-November, early-December easy games. Hopkins’ high-volume, low-efficiency shooting was not a recipe for success. And where was Reggie Cameron? The sharpshooter couldn’t crack the lineup despite the team shooting just a shade over 30 percent from behind the three-point line in those four games.

A late-December road trip to face No. 18 Kansas was a disaster; the Jayhawks sent the Hoyas back to Washington, D.C., as 22-point losers.

The reasons behind the loss were clear: fouling, rebounding and offensive ineptitude. The Jayhawks outshot the Hoyas by 18 at the free-throw line and outrebounded them by 10. The Hoyas got double-digits from Starks and Smith-Rivera (a trend of dependability that would continue for the rest of the year) but got virtually nothing from anyone else. Lubick, Hopkins and Smith combined for 12 points and just 57 minutes played, and Cameron had not scored in three games. A victory over Florida International University the next week was not much of a consolation. The Hoyas ended nonconference play with more questions than answers.

Home wins against DePaul and St. John’s at the start of conference play boded well for the future, but after an ugly road loss against Providence College, the team announced even worse news: It was investigating the academic eligibility of Josh Smith. The center would be held out of games until more information was known.

Just two weeks later, Smith was officially deemed ineligible for the remainder of the season. It was a frustrating first year in the District for the big man, who flashed impressive skill but struggled with stamina — Smith himself admits, “Last year, my conditioning wasn’t where it needed to be” — and defensive effort.

After the Providence game, the Hoyas travelled to Butler University and won in an overtime thriller that reinforced what we already knew: Without Starks and Smith-Rivera, this Georgetown team would flounder. On top of this, starter Trawick had a broken jaw and would be out indefinitely.

Without two of their most potent offensive weapons, and having lost a third before he ever stepped on the court, the Hoyas were on the brink of disaster.

The next five games encompassed two weeks of pure misery, as the Hoyas dropped all five games to conference foes. Some were lost in an especially excruciating fashion, like the gut-wrenching overtime loss at home against Marquette and the hard-fought, five-point home loss to Villanova.

But with their “backs against wall,” as Michael Bohlin of 247Sports put it, the Hoyas did something crazy: They started to win. It began with a massive victory over No. 7 Michigan State at Madison Square Garden.

“When I got hurt, I was able to sit out and watch the different ways I could be effective on the court,” Trawick, who had returned for the previous game, said.

His newfound wisdom showed against the Spartans, culminating in the first of what would be a streak of effective outings from the man who would emerge as the third cog in the Hoyas’ offensive machine.

After subsequent victories against Butler, DePaul and Providence, the Hoyas were back to 6-6 in the conference. As the final stretch approached, hope remained for the Hoyas to make it to March Madness.

The Hoyas came right back down to earth, however, in their final six games. The team suffered major losses to St. John’s and Seton Hall and lost a heartbreaker at Marquette, before rallying back for their best home win of the season over No. 13 Creighton. Georgetown was unable to capitalize on the win, however, as it returned with a flat loss to a scorching hot No. 6 Villanova team at the end of the regular season.

What doomed the Hoyas was a lack of any semblance of offensive competence from any of the key secondary players. Trawick, Smith-Rivera and Starks had to carry too much of the load. Still, with a decent showing in the Big East tournament, there was still a chance the Hoyas could make it to the NCAA tournament.

That dream was never to be realized. During the Big East tournament opener, the Hoyas faced cellar-dweller DePaul in a must-win game. Their NCAA tournament chances were crushed by the same DePaul team they defeated twice in the regular season by a combined 19 points, losing to the Blue Demons 60-56.

While Thompson claims to have been told the Hoyas were “the last [team] out” of the NCAA tournament selection process, such postseason uncertainty was wrought by his team’s failures.

The National Invitation Tournament came calling instead. The Hoyas accepted, welcoming West Virginia to McDonough Arena thanks to prior engagements at their usual home arena, Verizon Center. It was the first on-campus men’s basketball game since 2009, and the atmosphere was electric. The Hoyas ran away from the Mountaineers in front of the best crowd seen at a game all year.  Smith-Rivera was simply fantastic, and Starks and Lubick got a proper farewell in front of the Georgetown faithful. Frankly, it felt like a truly fitting end to a turbulent season.

The Hoyas took a trip to Florida State for the next round, and they were promptly gashed for more than 100 points in an embarrassing season-finale loss, losing 101-90. It was the first time the Hoyas had yielded 100 points in regulation since the 2000-01 campaign. The triumvirate came up big once again — Trawick, Starks and Smith-Rivera combined for 63 points — but a defensive meltdown to the tune of 11 conceded three-pointers and 38 free throws negated anything worth remembering.

Reflecting on a tumultuous season, we learned to appreciate the fine careers of Starks and Lubick. We admired the unmistakable development of Smith-Rivera and Trawick. We learned to temper our expectations for players like Cameron and Hopkins, whose growth hit some speed bumps. In the end, we learned that undeniable truth: “Losing stinks,” as Thompson said at Georgetown Media Day 2014.

“Last year was a down year for us, so winning is the big picture here.” Smith-Rivera said.

Here’s to hoping that the picture of Hoyas success comes into focus in 2014-2015.