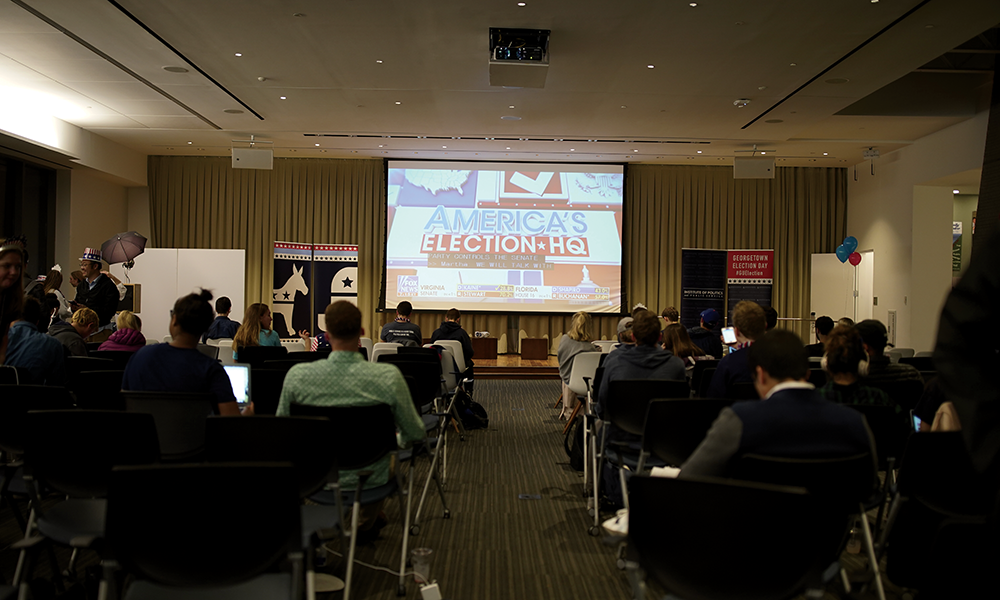 A pile of stickers lay on a table in the Healey Family Student Center, reading “friends don’t let friends miss elections” and “civically engaged AF.” Hand-drawn maps, depicting where students voted, either via absentee ballot or in person, surrounded the room. A mock polling station, where students could predict election results, was open throughout the night.

Getting Out the Vote

The role young adults play in boosting national electoral participation is foundational to GU Votes’ mission. In the 2016 elections, 62.4 percent of Georgetown students voted, according to a 2016 report by the National Study of Learning, Voting and Engagement. About 114 million votes were cast in U.S. House of Representatives races compared to 83 million in 2014, The New York Times estimated.

The increased turnout marks the first time the total number of voters exceeded 100 million in a midterm election, according to GU Votes Co-President Jacqueline Beveridge (SFS ’19). About 31 percent of young people are estimated to have turned out to vote, which is almost double the turnout four years ago, Beveridge said.

Despite high levels of youth participation, delays in the absentee ballot process prevented many Georgetown students from voting.

“I’ve been registered since I turned 18, so that wasn’t an issue, but I actually had to request three different absentee ballots in order to vote,” Georgia native Jack Dobkin (SFS ’20) said. “I ordered my first absentee ballot on September 19, and it was not delivered until my third attempt a week before Election Day, which is just inexplicable to me.”

The results from Georgia’s election still remain too close to call. Although Republican gubernatorial candidate Brian Kemp has declared victory, resigning from his position as Georgia secretary of state, Democrat Stacey Abrams’ legal team announced it will take legal action over uncounted votes, according to the Atlanta Journal Constitution. Residents from Dougherty County, among other counties, were allegedly denied the chance to cast their vote by mail.

Georgia’s gubernatorial race between Abrams and Kemp shows a “brokenness of the system,” according to Dobkin.

“Over the past few years, Brian Kemp used his power to disenfranchise thousands of people, especially people of color, in Georgia, and today on Election Day there were all sorts of intimidation and suppressive tactics targeted at people of color,” Dobkin said. “The fact that the end results came out to be the closest statewide race I’ve seen in my time growing up in Georgia shows just how impactful the effect of these restrictive policies are.”

Georgia is not the only state facing allegations of voter suppression. In North Dakota, a court reinstated a law requiring voters to have a residential street addresses, jeopardizing the voting rights of Native American residents, ABC News reported.

Voter suppression is a major point of concern post-election, according to Angela Maske (COL ’19), the president of H*yas for Choice.

“In Georgia, Florida, and North Dakota the clear disregard for voting rights was particularly apparent. These unapologetic moves to restrict voting access in order to retain power for [Donald] Trump and his hard-right allies makes it clear that voting alone will not get our oppressors out of power,” Maske wrote in an email to The Hoya. “We need to recommit ourselves to organizing towards justice, not simply through voting, but also through actively challenging systems of oppression that continue to harm and disenfranchise people all over the country.”

In response to the elections, student groups across campus have looked past the immediate red and blue and are instead focusing on communities affected by the results.

Rashida Tlaib (D-Mich.) and Ilhan Omar (D-Minn.) became the first two Muslim women elected to the U.S. Congress. Tlaib is the daughter of Palestinian immigrants, and Omar is a Somali-American refugee, according to CNN.

For Youssef Osman (SFS ’21), the Muslim Students Association’s director of programming, these historic wins give him pride in his Muslim faith and Palestinian heritage.

“The election of two Muslim women in Congress speaks so much to me on a personal level. Rashida Tlaib gives me pride as a Palestinian myself and hope that anything is possible with hard work and commitment to doing justice,” Osman said. “Ilhan Omar has been an inspiration for Muslims around the country, including myself, because she is an individual who has persevered in light of being a refugee and ridiculed for her faith.”

Certain election results reflected communities rising against Trump’s divisive rhetoric, according to Maske. During the midterm campaign season, Trump pledged to secure the border against an “invading caravan” of Central American migrants and narrow the definition of gender to male or female at birth, harming the transgender community, according to Reuters.

“Many of these races have also been about challenging the white supremacy, homophobia, transphobia, and sexism propagated by the Trump Administration, and for us that makes them particularly salient,” Maske wrote.

Echoing Maske’s sentiments, Osman said this election separates itself from previous U.S. political races because of the more diverse array of candidates.

“These midterm results mean so much more than any other election. History is being made in the right way as a response to rising Islamophobia and racism,” Osman said. “This is what ‘make America great again’ truly is — where anyone, regardless of race, gender or religion, can become a representative for all those who stand firmly for justice and equality in a free and democratic way.”

Despite Democrats’ gains in the House, Hunter Estes (SFS ’19), GUCR’s membership director in 2016, said certain losses for the party could be an indication of voters’ support for more moderate candidates.

“I think last night was bad for progressives,” Estes wrote in an email to The Hoya. “Whether it be Beto [O’Rourke] in Texas or [Andrew] Gillum in Florida, it seems that voters soundly rejected progressivism in a way that many were not expecting. I think the implications for this are huge, as the dozens of potential Democratic presidential candidates need to take note of the support for moderates and the political center that was shown by 2018 voters.”

“Democrats taking control of the House should serve as a warning sign to Republicans that the party needs to do a better job of reaching out to young people and African Americans if they hope to regain competitiveness in urban areas and (traditionally Republican) suburban districts,” Nugent wrote in an email to The Hoya.

The rise in political participation and election of candidates from typically underrepresented communities is a positive trend for the future of the U.S. political climate, according to GUCD Chair Maria Cornell (SFS ’20).

“I am hopeful we will see great, meaningful change in the coming years because of the collective organizing and activism we have seen erupt across communities and intersecting identities,” Cornell said.

A healthy future of the United States requires bipartisan efforts and voter turnout, according to GUCR President Jake Lyons (COL ’20).

“We’re an imperfect union that’s been moving toward a more perfect one – and elections like these are our part in that process,” Lyons wrote in an email to The Hoya.