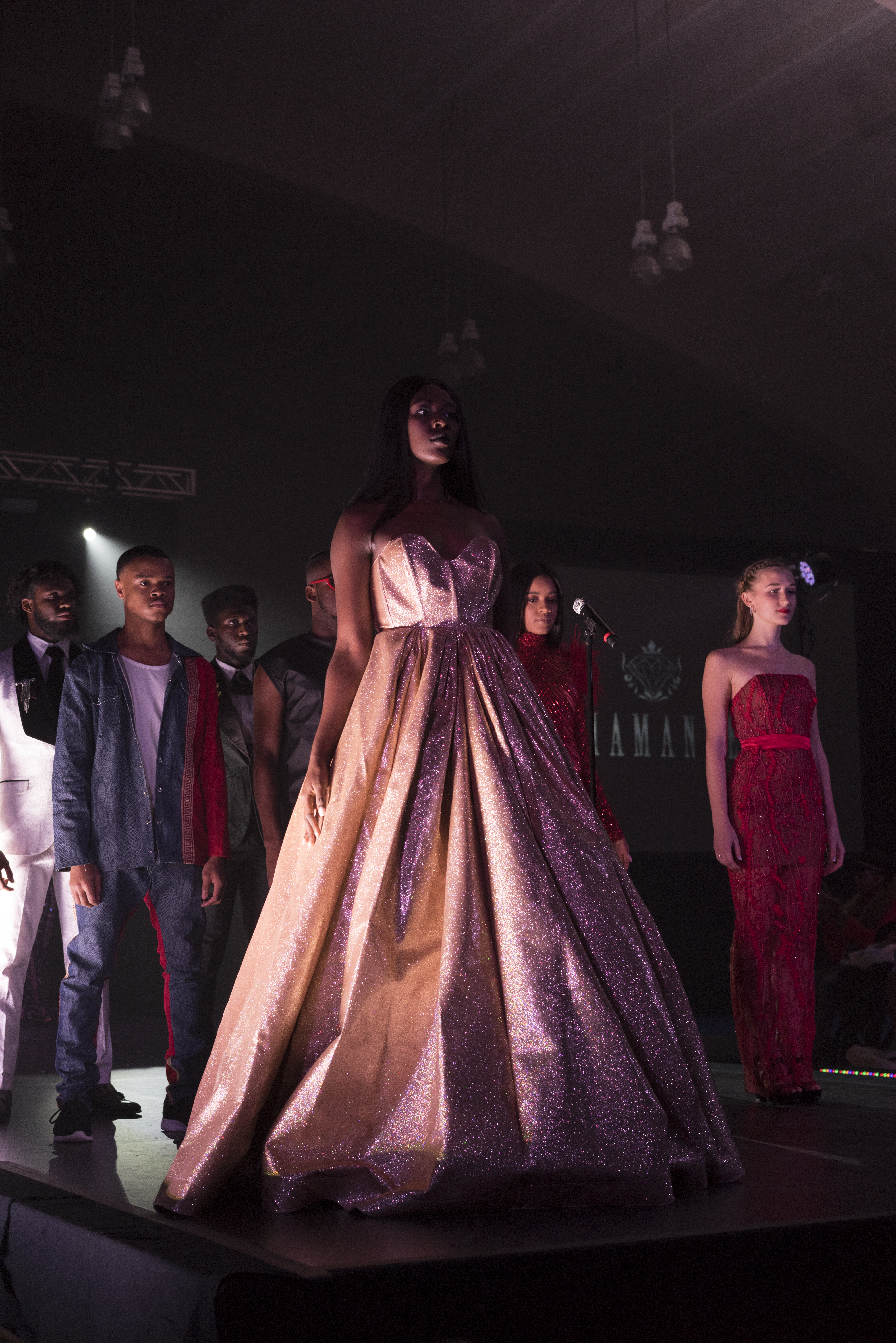 Hums of anticipation turned to silence as a captivating vocal recording of 20th-century film star Charlie Chaplin boomed across the McDonough Arena the evening of Saturday, Nov. 10, as the Diamanté Fashion Show began.

“To those who can hear me, I say — do not despair. The misery that is now upon us is but the passing of greed — the bitterness of men who fear the way of human progress,” Chaplin said in the recording, a clip from the 1940 movie “The Great Dictator,” narrating the short film that opened the show. “The hate of men will pass, and dictators die, and the power they took from the people will return to the people. And so long as men die, liberty will never perish.”

Student-run and organized primarily by Kevin Martinez (COL ’20), Diamanté featured collections from several fashion designers and performances from local dancers and singers, focusing on themes of justice and diversity.

Victorious and tragic moments of the past year flashed across the screen: The shocked face of black actress Regina King winning the 2018 Emmy for Outstanding Lead Actress in a Limited Series or Movie juxtaposed the mass of white nationalists bearing burning crosses at the 2017 “Unite the Right” rally in Charlottesville, Va.

The audience was immediately instilled with a deep sense of inspiration as the message of perseverance through adversity permeated the room. The tone was set, the message clear: The Diamanté Fashion Show was an act of resistance, a celebration of the diversity that is often undervalued and obscured in this country.

A stunning performance by Nourjannah Hendi (COL ’20) of soul singer Sam Cooke’s “A Change Is Coming” reinforced this message. The song choice was evidently intentional, its inspiring lyrics artfully reflecting the sense of hope and pride the entire show exuded.

As at last year’s event, Francis Kpue’s (COL ’21) self-choreographed dance performance was the highlight of the show. The performance was an assertion of excellence in its most creative form, perfectly in line with the show’s theme, “Reclaim Your Crown.” The fierce attitude and sheer talent of Kpue and his co-dancers, including Mike Lazarre (COL ’22) and Syed Chapman (COL ’22), were mesmerizing, leaving the crowd energized and filled with anticipation.

Jess Frankovich (COL ’20) opened the fashion portion of the show with a bold statement: Her standout red dress read “my body is mine.” As with other features of the show, the artists, designers and coordinators were clearly unafraid to make their crafts overtly political.

Kinetic Style, whose pink collection redefined the color, was a particularly strong portion of the show. The styles were dangerous and daring in a way that bubble-gum pink has seldom, if ever, been portrayed as. Even more impressively, the line made latex look good.

Sultry dark pieces from designer 626 Online and the multicolored patchwork coat of designer 1st Book harkened back to the ’90s. These collections seemed to truly cultivate the energy of the night. They were fearless and fashionable, redefinitions of glamor that shattered convention rather than merely standing outside it.

The safe collection by online designer retailer Rent the Runway seemed out of place. Its pieces were largely uninspired among collections that were daringly unconventional. This weak performance served as a reminder that innovation takes new blood and an industry willing to bet on people of all cultures and communities, rather than relying on the same staple looks and brands of the past.

Fashion designer and celebrity stylist Haus of Faleci’ago closed the show and left the audience in awe of its beautifully structured evening gowns. The designer’s collection epitomized elegance with its shimmering gold and deep scarlet pieces. In the final walk, before the models took their bows, they held their hands up in the Black Power fist, symbolizing the empowerment, defiance and pride that Diamanté perfectly embodied.

Martinez orchestrated a dazzling spectacle, a high-quality fashion show that almost seemed too professional to be student-run. Diamanté was graced with character and image, an embodiment of glamor made accessible and fresh. The show featured a dozen moving pieces that came together nearly seamlessly — a gorgeous display of talent, purpose and passion.