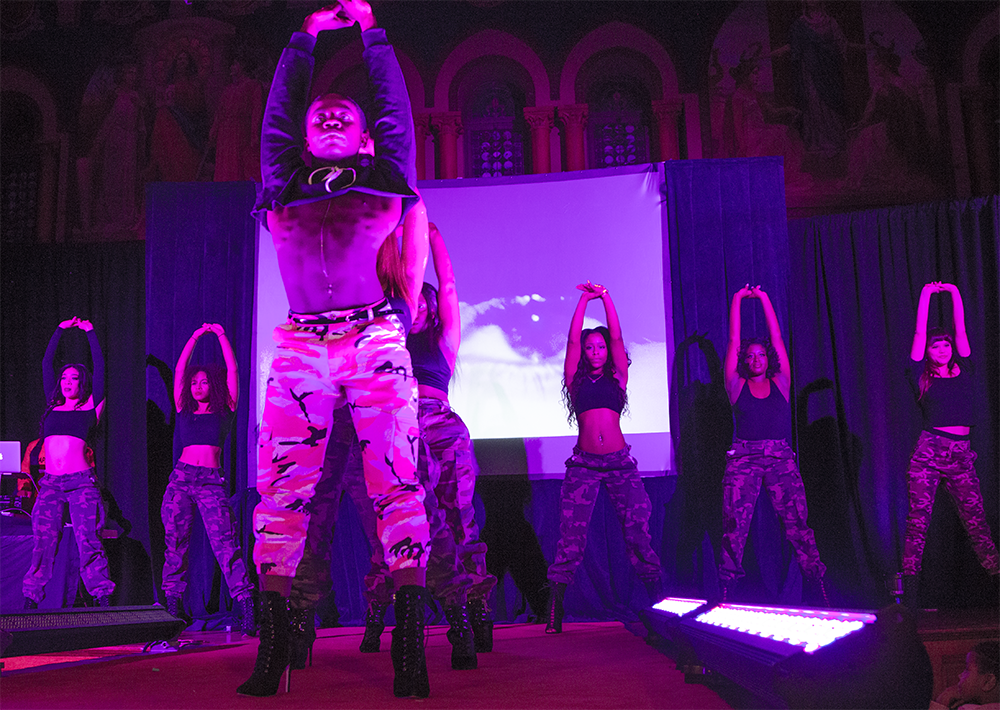 Dim purple-hued light permeated Gaston Hall as the audience buzzed in anticipation for the Diamante Fashion Show, presented by the Georgetown Program Board. With a single spotlight on his face, Howard University student TK broke out into Nina Simone’s classic ’60s song, “Feeling Good.” As his stunning falsetto reminded attendees that “it’s a new dawn, it’s a new life, it’s a new day,” anticipation for the coming spectacle reached its peak.

A short VICE News video began to play, opening with Martin Luther King’s iconic “I Have a Dream” speech. The clip portrayed Viola Davis emphasizing the importance of inclusion and diversity in her acceptance speech for the 2015 Emmy Award for outstanding Lead Actress in a Drama Series, when she became the first black woman to win an Emmy in the category. The video went on to show the heartbreaking aftermath of the Orlando nightclub shooting on June 12, 2016.

In just the first 15 minutes, the show pushed its audience to deeply ponder the racism, homophobia and terrorism creating deep divides in this country. The end of the video obliquely referenced the show’s title, posing the question: “Diamonds are formed under pressure. What will you become?”

The first collection to go down the catwalk was “VI.II.VI” or “626,” designed by Maryland native Dominique Thomas. Color blocks accentuated the distinct shapes of the pieces, which include flared trousers, daring crop tops and zippered vests in whites, blacks, reds and nudes.

“Young Genius Wild,” a collection designed by Camion Horton (GRD ’17) and Deshaun Rice (COL ’19), came next, consisting mostly of simple yet effortless pullovers with “YGW” emblazoned across the chest.

The show’s highlight was undoubtedly the energetic dance performance to Beyoncé’s “Flawless,” choreographed and performed by the talented Francis Kendoll (COL ’21) alongside eight female dancers. The fierce dance moves aligned perfectly with the lyrics’ message of female empowerment and gender equality.

During the song’s bridge, Nigerian writer Chimamanda Ngozi Adichie’s voice penetrated the hall, defining the word feminist as “the person who believes in the social, political, and economic equality of the sexes.” Here, the show yet again used artistic forms to creatively advocate for social change.

The collection of Jess Frankovich (COL ’20), “2004 Uncle,” was a mix of old and new, with vintage-style off-the-shoulder shirts, dungarees and sweatshirts that nodded to previous decades while staying modern.

Casual and simple, the pieces presented by the brand “Ideas Over Money” featured a mix of monochrome sporty pieces and structured coats; a noteworthy outfit in the collection was a long, gray, oversized jacket paired with fire-embroidered jeans.

Next, Georgetown a capella group Resonant Essence Live sang a touching cover of Reverend James’ “I Don’t Believe He Brought Me This Far to Leave Me” in honor of the recent Parkland, Fla. shooting victims, whose faces were displayed on the screen.

The lyrics’ message of hope amid suffering and pain parlayed perfectly into the monologue written by Nadra Dennis from the Center for Multicultural Equity and Access and performed by DeJaNeal Brown (NHS ’19). The monologue commanded the world to “wait for my shine” and encouraged individual and collective empowerment.

Bounding down the runway with a jukebox slung over his shoulder, Norman Francis Jr. (COL ’20) debuted the “Online Thrift Store” collection wearing a vintage royal blue biker jacket accented with multicolored stripes. The models who followed also held props such as flowers and camcorders to reflect the playfulness of the ’90s that the entire collection paid homage to.

The highlight pieces of the line were a dazzling blue evening gown with a plunging neckline and an off-the-shoulder leather jacket that post-Danny heartbreak Sandy from Broadway’s “Grease” would have coveted.

Spoken word artist Summer Time’s (COL ’18) powerful performance of her poem “Fractions” explored her difficulties trying to find wholeness within herself despite her mixed heritage. Her confident conclusion — “I am as whole as I will ever be” — evoked loud applause from the audience, which was left feeling inspired.

Although the show experienced some technical difficulties and had slightly long transitions, Howard University’s DJ Noble successfully entertained the crowd with rhythm and blues throwbacks and rap anthems such as Migos’ “Motor Sport.”

Still, the standout collection of the night was “House of Clyopatra,” designed by Nigerian native Ify. Opening with striking multicolored swimsuits, the line had an equally impressive evening collection, with beautifully structured head ties and gowns adorned with bold West African prints.

As the models strutted down the catwalk for the final time, they held placards with statements celebrating aspects of their identities: “I am bisexual,” “I am Latinx,” “I am biracial” and “I am an immigrant.” The placards highlighted the incredible diversity of the models in the show.

Finally, the show’s curator, Kevin Adonis Martinez (COL ’20), took to the stage to receive a bouquet of flowers and a well-deserved round of applause. Clearly emotional, he exposed his vulnerability when he told the audience about his past struggles with low self-esteem.

“At a point in my life, I didn’t know my worth. … I failed to realize I was human,” Martinez said.

Although the thought-provoking and powerful performances made the show’s themes crystal clear, Martinez underlined the purpose once more, ending his thank-you speech with an affirmation of human worth.

“Diamante is about being a unique diamond and how everyone should be prized,” he said.