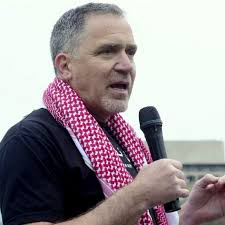 Miko Peled, a Jewish pro-Palestinian writer and activist who has been accused of posting antisemitic tweets, spoke at an event Sunday despite widespread condemnation from students and campus organizations.

Peled’s invitation to speak virtually at Georgetown University provoked backlash, resulting in a petition led by the Georgetown Israel Alliance, a campus organization promoting education and discussion about current events and issues surrounding Israel and the Middle East. The petition was signed by over 130 students and three other student organizations asking the university to cancel the event for giving a platform to a speaker with a history of antisemitism without allowing other voices to contest his beliefs.

“While it is important that a variety of opinions and perspectives are represented in a discussion of the Israel-Palestine conflict, Mr. Peled’s rhetoric crosses a line into hate speech, as demonstrated by his social media accounts and speeches at past events,” the petition reads.

On a Georgetown Zoom webinar titled “Anti-Zionism vs. Anti-Semitism”, Peled spoke about the Israel-Palestine conflict and discussed how he delineates where anti-Zionism ends and antisemitism begins. Anti-Zionism is generally defined as a political ideology in opposition to the state of Israel, whereas antisemitism is prejudice against the Jewish people.

“The groups that oppose my views and wanted to silence the event at Georgetown did not act because they are Jewish. Their opposition is a result of their Zionism, a racist, violent ideology,” Peled wrote in an email to The Hoya. “The work that is being done by students for justice in Palestine is heroic.”

GU SJP and GU-Q SJP did not immediately respond to requests for comment for this story.

The petition said Peled’s past comments reflect antisemitism. In tweets from 2016 cited in the petition, he compared the Israel Defense Forces to Nazi Germany’s Gestapo and referred to Jewish people as “sleazy thieves” in reference to U.S. aid to Israel.

Despite the petition’s concerns, Peled did not infringe Gerogetown’s Speech and Expression policy, so administrators did not intervene, according to a university spokesperson.

“Georgetown University is committed to the free and open exchanges of ideas, even if those ideas may be found difficult or objectionable by some,” a university spokesperson wrote in an email to The Hoya. “Faculty members and student groups with access to benefits may invite any outside speaker or guest to speak on campus or at a virtual event. An appearance of any speaker or guest on campus, or at a Georgetown virtual event, is not an endorsement by Georgetown University.”

While the university is committed to the principle of free speech, it also stands against bigotry, hatred and racism, according to a university spokesperson.

“While we affirm that open discourse, discussion and debate are essential components of academic life — we also have foundational values that stand in clear opposition to bigotry, hatred, and racism, and in clear support of assuring that every student is welcomed and respected in our community,” a university spokesperson wrote.

However, the petition argued that the event does not promote free speech because of its webinar format. Although there was a Q and A portion of the event, students could not interact with Peled face-to-face.

“While in normal times we would move to condemn this event and then try to engage with the speaker/attendees regarding their antisemtic viewpoints, the use of Georgetown’s webinar function makes it impossible for attendees to directly interact with the speak or other attendees,” the petition read.

Although the petition took the position that the format of the event should be changed, the event went forward as planned.

During the conversation with GU SJP presidents, Peled suggested antisemitism and anti-Zionism do not overlap and instead stand in opposition to one another.

Peled also compared the Israeli-Palestinian divide to aparthied and accused the Israeli government of genocide and ethnic cleansing.

Rebecca Stekol (SFS ’21), co-president of JSA — one of the four organizations that signed the petition — said the event’s choice to only allow Peled’s definition of anti-Zionism and antisemitism to be heard is dangerous because people may think Peled’s opinion is held by all Jewish people. (Full disclosure: Stekol formerly served as a deputy opinion editor and an opinion columnist for The Hoya.)

“More than anything, it was a careless choice,” Stekol wrote in an email to The Hoya. “I am disappointed in their planning of this event because it is wrong to ask one Jewish person, who espouses views that have crossed into antisemitism, to paint an umbrella definition of what is and is not antisemitism.”

Stekol added that SJP could have invited other speakers to talk about Zionism who would have better acknowledged that the intersection between anti-Zionism and antisemitism is a complex topic.

“That is an ongoing dialogue among the entire Jewish community, and there is not just one definition that neatly fits anti-Zionism and antisemitism into separate boxes, because the line is easily blurred,” Stekol wrote. “We need to retain agency over this dialogue. In addition, there are many other progressive, pro-Palestine Jews that SJP could have reached out to who do not espouse antisemitic rhetoric.”

During the Q and A portion of the event, a student confronted Peled by accusing him of antisemitism and bringing up his past tweets, including one from 2016 and a 2019 tweet in which he called Zionism a sign of dual loyalty to the governments of the United States and Israel. Peled denied he was antisemitic and said he had never made antisemitic statements.

“The question that you have submitted, that you or somebody submitted to you to ask, is false. None of it is true. None of it happened. I did not express any form of antisemitism in any of my expressions at all, ever,” Peled said.

Stekol expressed disappointment with how the event was ultimately allowed to proceed and said inviting a speaker who uses antisemitic rhetoric devalues the important conversation about where the line between anti-Zionism and antisemitism lies.

“In my time at Georgetown I have engaged in many meaningful dialogues about Israel/Palestine with students along a wide spectrum of opinions.” Stekol wrote. “Even though Peled is Jewish, Jews can hold antisemitic beliefs, and it is tokenizing and harmful to have him as the sole representation of Jewish voices at this event.”

CORRECTION: A previous version of this article said that the president of Georgetown University Students for Justice in Palestine moderated the event alongside the president of GU Qatar SJP, who in fact was the only person to speak with Peled. The article has been updated to reflect this information.