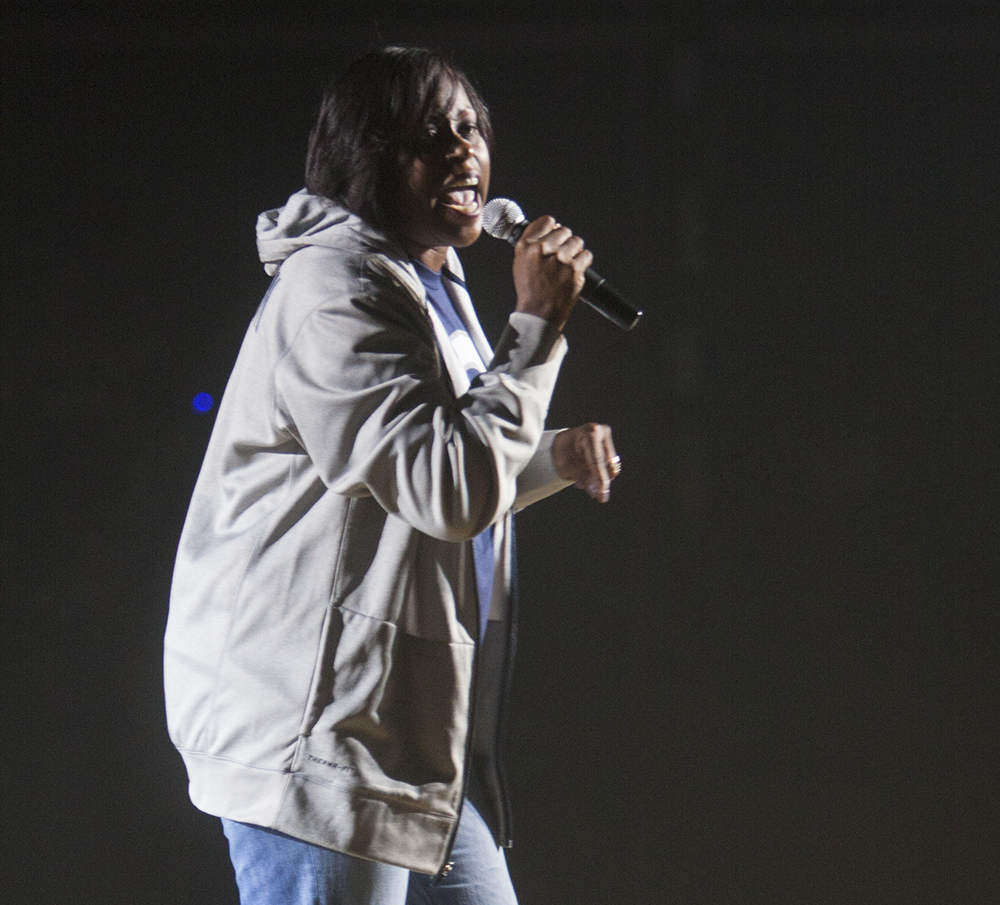 Most people do not have a choice but to look up to Natasha Adair.

“Coach A,” as she is known by her players, is 6 feet 2 inches tall and her wide smile and firm handshake are captivating. She has won and lost in every role of college basketball: on the court, the sidelines and the recruiting trail. In doing so, she has developed a patient demeanor and exudes a calm confidence that will serve her well in her first season at the helm of a Georgetown women’s basketball program wracked by instability over the past two years. Adair returns to the Hilltop after being an assistant coach for the Hoyas from 1998 until 2004.

“I’ve gone through each step and phase of learning and development, and coming back to Georgetown, it feels like it is time, this is my team,” Adair said. “I was not looking for a change, but then [Director of Athletics] Lou Reed called. I can’t even imagine myself not being here. It’s home. I’m a born-and- raised Washingtonian.”

In her playing days, basketball took Adair from Einstein High School in nearby Kensington, Md., to Pensacola Junior College and eventually the University of South Florida. Her coaching career began at Georgetown, before she honed her skills during an eight-year stint as an assistant and associate head coach at Wake Forest. The College of Charleston then named her head coach ahead of the 2012-13 season.

“Knowing the tradition of Georgetown and just what it stood for academically, socially and athletically made this a dream come true,” said Adair, who has quickly hired two of her former Georgetown players as her assistants.

“I was in Florida. She called me on a Friday night at 10 o’clock and said, ‘I need you to be in D.C. by Sunday,’” said assistant Sarah Jenkins (COL ’05), a former starting guard and team captain. “I’m the energy bus of this group. I’m getting everybody hyped, everybody ready. I was the same way as a player. It means a lot to come back and be here.”

If Jenkins supplies the energy, fellow assistant coach Melba Chambers (COL ‘99), who was a starting guard at Georgetown from 1995-99, supplies the fervor. Chambers followed Adair to the Hilltop after serving as an assistant to her at the College of Charleston.

“I appreciate what Georgetown stands for, so to say I was excited when Coach A called me is more of an understatement,” Chambers said. “I’m more of the feisty one, I must say; I get real riled up. Coach Jenkins is more of the ‘Come on guys, we got to pick up the energy,’ and I’m more of the one screaming ‘Come on, let’s do it right.’”

Adair has a unique relationship with her assistants because they were once her players.

“I’m mama hen with this group, but I love the way we balance each other out,” Adair said of her coaching staff. “If you just look at her stature, you don’t think she could hold you off, but Melba was a Baltimore police officer, narcotics unit, so that’s pretty tough. She’s the no-nonsense one. Sarah, she is our energy bus.”

Together, Jenkins and Chambers will serve as a bridge between an inexperienced team and its head coach. Adair is the Hoyas’ fourth coach in four years, but there are no seniors on the roster to have experienced it all. The two assistant coaches find comfort in the fact that they were once in their players’ shoes.

“We teach them and tell them, you can’t tell us that you can’t, because we did it,” Jenkins said. “Everything you’re going through right now, we’ve already done it.”

Adair appreciates the dynamic of her coaching staff. She trusts her former players to keep tabs on the pulse of the team and build the relationships necessary to create a healthy team dynamic.

“The players don’t always want to always come to the head coach because they think it’s the principal’s office or they don’t want to say certain things,” Adair said. “They have Melba and Sarah as resources. They played here, they were in the locker room and they were on that floor.”

The coaching staff exudes a passion for the Hilltop that catches your attention as soon as you step into their offices. The three women are quick to admit that they are working their dream jobs, and it is impossible not to believe them. However, emotional investments and dreams are not worth much once the ball is tipped.

Nine conference games ended in double-digit losses for Georgetown a season ago, and a month after Adair was hired, one of the lone bright spots in the 2011-12 campaign, Big East Rookie of the Year and 6-foot-5-inch center Natalie Butler, transferred to Connecticut. Adair is working tirelessly to implement her own philosophy and rein in all the turbulence that has recently struck her program.

“There’s no pressure off just because it’s our first year here and we don’t have any seniors,” Adair said. “We don’t just want to keep them close, we want to win. We’re going to be very defensive-minded. I think we need to lead the league in steals and rebounding from the wing position.”

Adair preaches a hardworking and disruptive brand of basketball that reflects her own playing style. The former power forward pulled down 12.5 rebounds a game during her senior year at South Florida.

“I think people get confused with [things like] ‘I scored 30 points, but did we win, how successful were we, did you set a screen to get your teammates open so that she could score and did we celebrate that screen?’” Adair said.

Behind Adair’s desk hangs a picture of Rebekkah Brunson (COL ’04), her star pupil. The Minnesota Lynx forward possesses three WNBA championship rings and embodies everything that Coach A wants out of her players.

“Bekky wanted to out-hustle everybody. She didn’t just want to outwork the competition, but her teammates as well,” Adair said. “It didn’t matter if she missed a 15-foot jumper because she was getting the rebound anyway. Win every sprint, dive on every loose ball, that’s the philosophy we preach everyday.”

If Adair has her players buy into that type of philosophy, the Hoyas will be hard to stop.