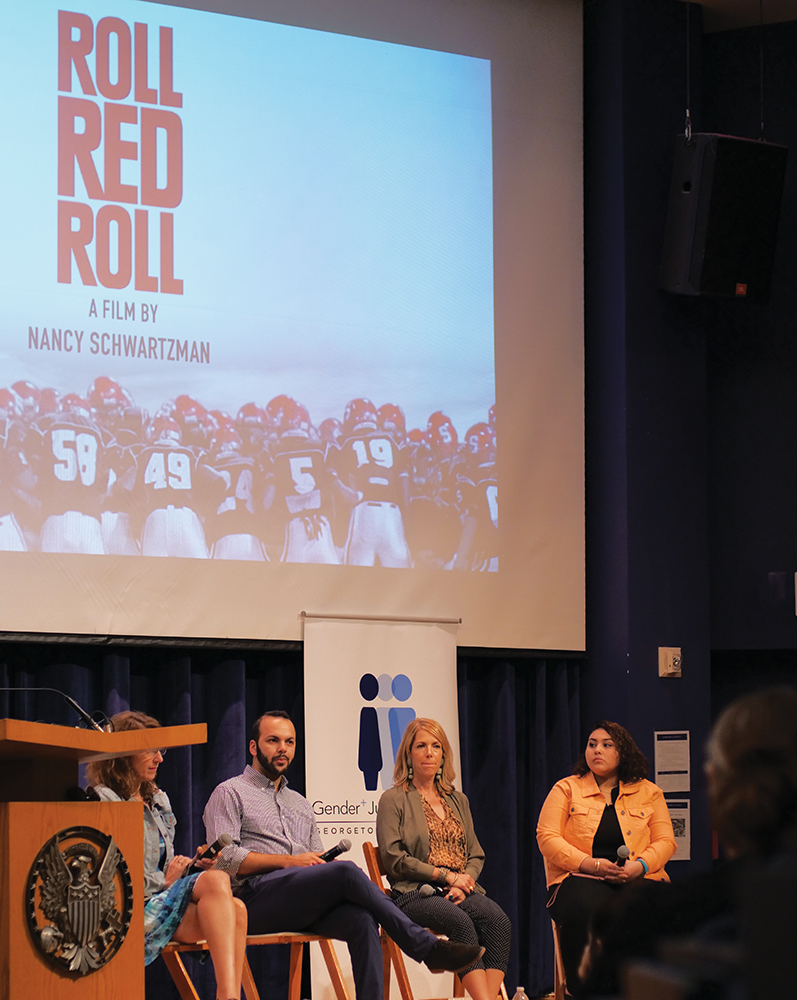 Addressing the pervasive role of rape culture and toxic masculinity through facilitated dialogue is the best way to prevent sexual assault and violence, panelists agreed at a screening and discussion of the film “Roll Red Roll” on Sept. 26.

The event was hosted by the Georgetown University Gender+ Justice Initiative alongside Men Can Stop Rape, an organization that mobilizes men to create cultures free from violence against women. Following a screening of the film, Nancy Schwartzman, the documentary’s director and producer, was joined in conversation with Jeremy Hardy, training and technical assistant coordinator for Men Can Stop Rape and Karla Lozano Medina, advocate for healthy relationships and recent high school graduate.

“Roll Red Roll” tells the story of the high-profile sexual assault of a young woman at Steubenville High School in Ohio by members of the school’s football team. The film demonstrates the influence of rape culture on the reactions of students, parents and coaches in Steubenville to the case, as well as their subsequent treatment of the perpetrators and the victim.

The film takes a new approach to talking about rape culture and sexual assault that recenters the focus of the story on how a larger community is affected by a sexual assault case, according to Schwartzman.

“I wanted to explore the issue of sexual assault but make a film that really looked at perpetrators and bystanders. So often the narrative around rape hinges on the victim,” Schwartzman said. “If we want to shift the culture — which I do, and I’m sure people in this room want to — I think we need to look at rape culture in general.”

Men Can Stop Rape was founded in 1997 by a group of men who intended to reshape conversations about gender violence prevention to shift the responsibility away from women. The organization takes a public health approach to violence prevention in its workshops and programming, with a three-part framework focusing on public education, technical assistance training and development, Hardy said.

Documentaries like “Roll Red Roll” can be constructive tools for promoting conversations about toxic masculinity, according to Hardy.

“A film like this, and all the great work that Nancy and her team have done, is contributing to the resources that we as an organization use, really, in changing social norms, which is our main goal,” Hardy said.

Georgetown’s inaugural 2016 Sexual Assault and Misconduct Climate Survey showed that 31% of female undergraduates reported experiencing nonconsensual sexual contact on campus. The university administered its most recent climate survey this year from Feb. 1 through March 15 and intends to release the results in fall 2019, according to the university website.

Sexual assault prevention organizations should work towards providing education to members of all communities in order to make progress, Hardy said.

“It really feels like it takes a certain kind of personality to choose to confront violence as a way of living,” Hardy said. “And yet, at the same time, I wish that we all had the skill set to that. It’s one of those things that we have to teach on an ongoing basis in order to really significantly decrease violence in any given community.”

Exposing and fighting taboos around rape culture is also key to preventing sexual assault, according to Schwartzman.

Lozano Medina, who graduated from Calvin Coolidge High School in Northwest Washington, D.C., in spring 2019, is a sexual assault survivor and activist who has worked with groups including Break the Cycle, a group that works to educate young people about healthy relationships and abuse prevention, and Men Can Stop Rape.

Sharing stories of resilience can inspire and bring people together through common experiences and struggles, Lozano Medina said.

“Being able to express my story and just see how people resonate with that, it gives me hope, and it gives me a reason to continue to do what I do,” Lozano Medina said. “I say this from the heart: as a survivor of sexual assault and a witness of domestic violence, no one should ever feel left out. It is in unity that we find our strength.”