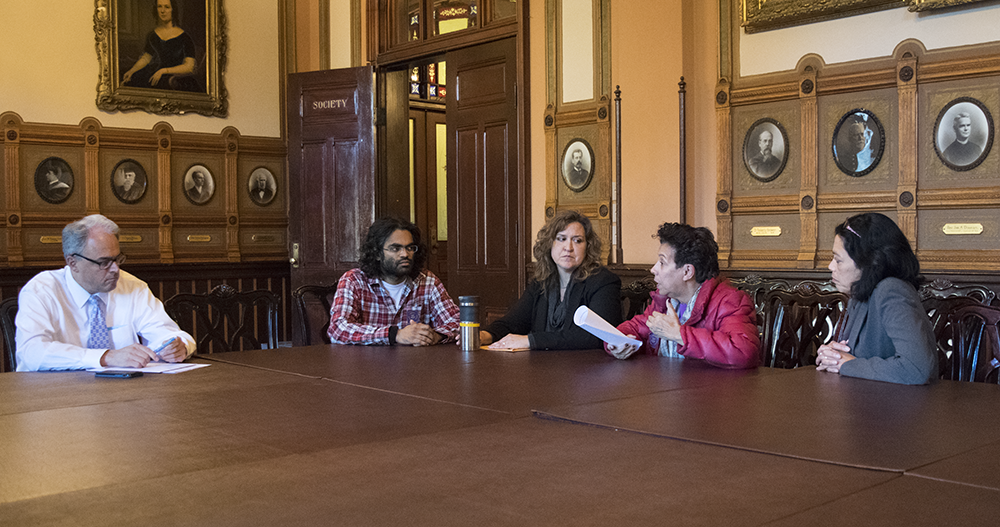 Georgetown has not offered sufficient financial concessions to the six-person bargaining team representing the more than 1,000 adjunct faculty on the main campus, according to sources familiar with the negotiations who were not authorized to comment.

The petition, signed by 128 members of the Georgetown community as of 7 p.m. Friday, calls on Georgetown to “integrate the adjunct teaching faculty fully” into the campus community.

“Without us, the university could not fulfill its mission of offering quality educational and career advancement opportunities for the community,” the petition reads. “We view this situation of low pay, no access to medical and/or health benefits as incompatible with the Jesuit characteristic of cura personalis, which means care of the whole person.”

According to the Office of Assessment and Decision Support’s most recent data from 2015, 1,086 part-time professors taught at Georgetown. The adjuncts estimate there are about 540 tenured or tenure-track, full-time and 230 nontenured, full-time professor at Georgetown, and that the adjunct faculty comprise more than half of all professors at main campus. University officials did not give accurate, updated counts of the faculty categories.

The adjunct faculty are represented by the Washington, D.C. branch of Service Employees International Union, SEIU Local 500, which also represents other universities in the area. In an email to The Hoya, university spokesperson Rachel Pugh commented on the state of the negotiations.

“We are continuing to work cooperatively with the union that represents our adjunct faculty on a renewal of the collective bargaining agreement,” Pugh wrote. “We have agreed with the union that we will not discuss the specifics of those negotiations as they are ongoing.”

Joe Ferrara, chief of staff to the university president, met with the adjuncts and said he would relay the message to DeGioia, who was not present at the time.

Martin Conway, an adjunct professor of sports management, said in an interview with The Hoya that some adjuncts have to “literally piece together” their careers due to the low level of compensation and semester-by-semester contracting.

“The gig economy, as it is commonly referred to, is very clear for adjuncts, [who are] having to tie together two or three circumstances in many cases for them to constitute a living,” Conway said. “If you have young children or you are just starting a family, that sort of burden is even higher because of not knowing whether you will be there.”

To live a comfortable life, D.C. residents must earn at minimum $103,543 in annual income, according to a 2017 SmartAsset study.

Kerry Danner-McDonald (COL ’93), an adjunct professor in the theology department, said since being hired in 2011 she has received a $100 increase in her per-course pay — putting her earnings from her two-course load at $12,200 per semester.

Nevertheless, most adjuncts are paid more than $6,100 per course, and access to university benefits varies greatly by department. For example, some departments provide shared office space, while others provide none at all.

According to aggregate data from The Chronicle of Higher Education, a Georgetown adjunct earns an average rate of $7,750 per three-credit course.

The current contract also stipulates a fund of $35,000 per fiscal year, from which adjunct professors can request reimbursements of up to $600 for costs associated with “professional development activities related to teaching.”

Sitting at a table outside Midnight Mug, where she hosts her office hours for the 35 students in her “Problem of God” class, Danner-McDonald said another “extra burden” placed on many adjunct instructors is the expectation they will receive health care through a spouse or a second job, or will pay for it themselves.

Danner-McDonald recalled one day when she arrived at Georgetown at 9:30 a.m. for her first class of the day and stayed until 7:15 p.m. By that time, she was pained by back soreness from shuttling her instructional materials across campus.

Conway said many adjunct professors are also disenfranchised from high-level governance, as they cannot participate in the faculty senate — a body that formulates academic policy and advises the president and board of directors — because they are not full-time faculty. It is up to each department to decide if it wants to include its adjuncts in meetings.

“Adjuncts are part of and do take part in various department-level meetings,” Conway said. “Beyond that, though, on both the main campus or any of the other campuses, there is not a formal place and not a specific role for adjuncts in [governance], whether it’s faculty senate, or it’s executive faculty or even some other governance groups that have been set up.”

Adjuncts’ status as part-time faculty also means that some receive contracts on a semester-by-semester basis and are often asked to commit to teaching a class in the spring before the academic year starts, but without receiving a contract until December.

“It puts a lot of stress on a lot of adjuncts in addition to dealing with students, being able to give feedback, doing recommendations, doing the kinds of off-school, off-class things that are expected of them but they are not contracted to do,” Conway said.

This pressure led Bonnie Morris, who taught as an adjunct in the women’s and gender studies department combined with another adjunct position at The George Washington University, to leave Georgetown last year. She now lives with her family in Santa Cruz, Calif., to save considerably on housing costs — an important factor given the high cost of rent in Washington, D.C.

“When you get an arrangement that includes benefits, it is more than possible to have an outstanding career as an adjunct lecturer,” Morris said. “What happened is just when I was starting to feel pretty secure, [GWU] made a whole bunch of budget cuts and they eliminated my job, and with that gone the amount that Georgetown was paying me was not enough to live on in Washington.”

The adjunct faculty have also been supported in their plea by students from the Georgetown Solidarity Committee who organized a photo campaign in Red Square to bring awareness to the issue.

Photo campaigns, petitions and more negotiations are among the few advocacy tools the adjuncts have left at their disposable, as they are bound by the current contract not to engage in any demonstration that “interferes with or disrupts the normal operations of the University.”

The 2014 contract that the adjuncts and SEIU Local 500 brokered was set to expire June 30 but was extended twice. The current extension’s expiry is set for Oct. 31, at which time the adjunct faculty are allowed to engage in other collective bargaining methods such as strikes and sit-downs.

The situation at Georgetown is not outside the norm in higher education today. A 2017 study by the American Association of University Professors found that 40 percent of university faculty nationwide are adjuncts. Seventy percent are contingent faculty, which includes nontenure-track, full-time faculty who are contracted on a per-semester basis.

Despite Georgetown’s relatively better pay, adjunct professors still feel the effects of teaching with financial and career instability. When asked why she has stayed in her career given the low pay, Danner-McDonald said it is out of love for her students.

“Our mission aims to develop intellectual and spiritual understanding, seek justice and to live in service of others. I am deeply committed to Georgetown’s mission even when it fails in practice,” Danner-McDonald said. “Love demands fidelity, and to identify weaknesses, in the hope of being better, is an act of fidelity and love.”

This post has been updated to reflect the cost of living in D.C.