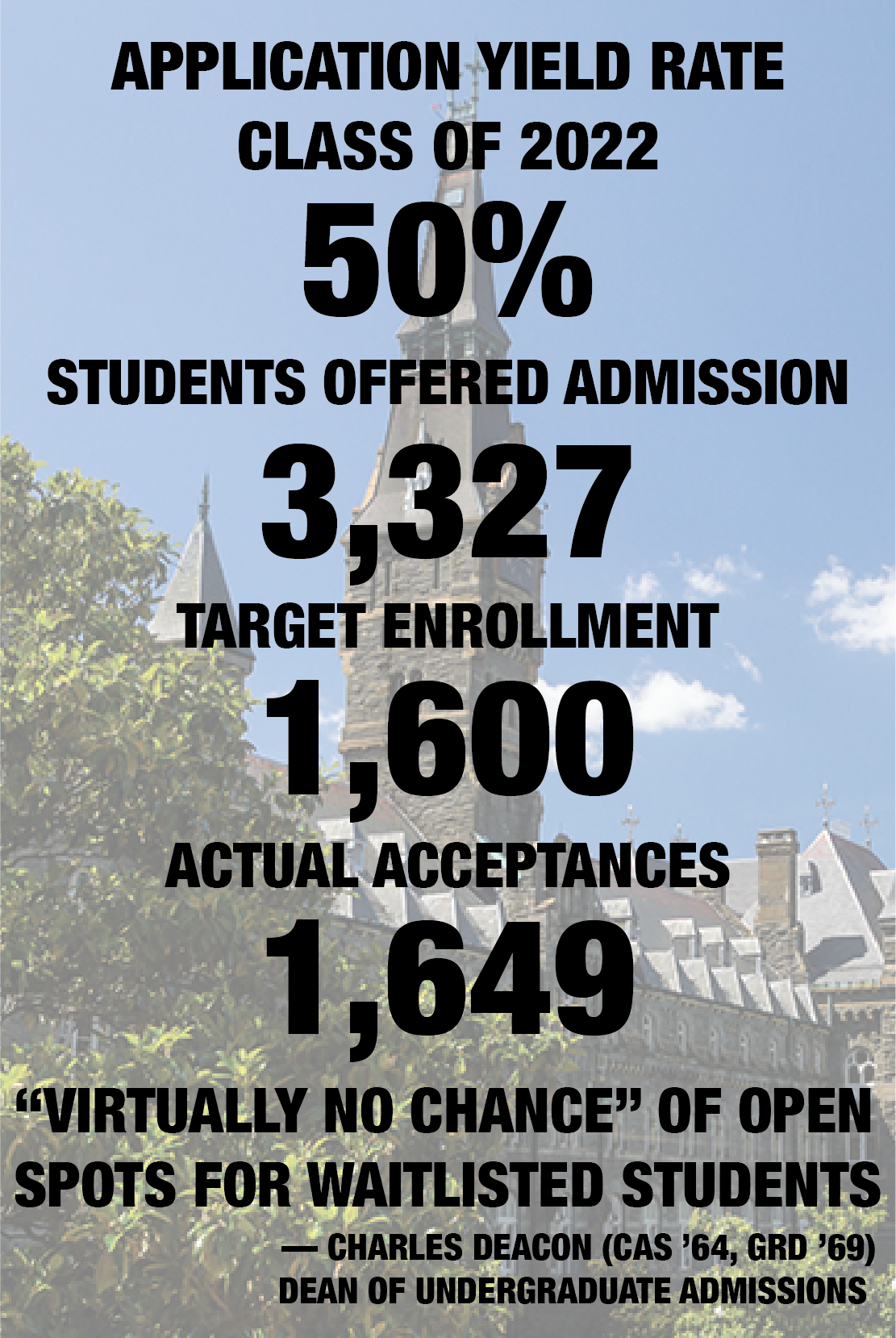 Georgetown’s admissions yield for the Class of 2022 reached 51 percent, the highest in recent memory, following a record-low acceptance rate and an all-time high in applications submitted to the university.

The university’s admissions yield refers to the number of admitted students who paid the May 1 enrollment deposit and plan to attend Georgetown in the fall.

Out of the 3,327 students admitted from an applicant pool of 22,897 students, 1,700 students paid enrollment deposits, according to Dean of Undergraduate Admissions Charles Deacon (CAS ’64, GRD ’69). This year’s rate is a marginal increase from last year’s 49 percent.

The admissions office received 22,897 regular decision applications to the Class of 2022, up from the 21,459 applicants Georgetown received in 2017. Georgetown accepted 3,327 students, a record-low 14.5 percent of applicants.

The university plans to only admit waitlisted students for the School of Nursing and Health Studies, Deacon said.

The university anticipated an enrollment of around 1,580 students, Deacon said. Because of the unexpectedly high yield, the current number of students enrolled in each of the undergraduate schools exceeds the target number, except for in the NHS.

Students will be taken from the waitlist to fill the remaining spots in the NHS to ensure it reaches the enrollment goal of 115 students, according to Deacon.

All other applicants were either released from the waitlist or remain on it, despite the lack of available spaces, Deacon said.

“We let a few people who really wanted to hang in there, to stay on a very short waiting list, about 15 or so, but we’ve told them there’s virtually no chance there’s going to be any spaces,” Deacon said in an interview with The Hoya.

The total size of the student body is tied to the campus plan passed in 2017, a 20-year agreement between the university and local residents that caps the number of enrolled undergraduate students to 6,675.

The admissions office will have to reduce the number of admitted transfer students to account for the greater number of incoming freshmen, Deacon said. Previously set at 125 students, the target number of transfer admissions may be reduced to 100, according to Deacon. Transfer students are accepted on a rolling basis.

“Right now, because we have to be within the enrollment cap, we are essentially holding on transfer admissions,” Deacon said. “We are putting a moratorium on any further admits until we see where we are in the middle part of June at which point we may be able to offer a few more transfer admits.”

Twenty-three students have already requested to defer enrollment, and based on yield rates in previous years, Deacon said the university anticipates around 30 students in total will take a gap year, and 50 others will withdraw for other reasons. Deacon anticipates the Class of 2022 will ultimately reach its target enrollment size through the process of attrition.

“Historically, about 45 to 50 students will ultimately withdraw from their deposit either getting off a waiting list elsewhere or some personal circumstances,” Deacon said. “We’re only in the beginning of that process so we’re hoping that happens — normally we hate to see that happen — our best guess is it might bring us back to around 1,620.”

“The average student admitted was about a 1460 on the SAT, and the average coming in is about 1440,” Deacon said. “That’s the highest it has ever been so that’s one indicator that we’re getting stronger students. We’re also getting the same diversity in terms of first generation and ethnicity and those students are coming in with stronger scores as well.”

The undergraduate schools reported steady yields, with the exception of Georgetown College, which saw an increase of about 3 percent from 45 percent to 48 percent. The School of Foreign Service reported a 50 percent yield, the NHS recorded a 50 percent yield and the McDonough School of Business yielded 55 percent of applicants.

The increase in the College’s yield may be attributed to a shift in the applicants’ interest for the humanities and social sciences, according to Deacon.

“The biggest percentage increase was the College, which is usually the lowest of yields,” Deacon said. “That would be an indication that students in the humanities and social sciences are saying yes at a higher rate.”

Deacon said the overall increases in applicants may be due to a desire to live in Washington, D.C.

“There may be something going on that is causing Washington to be a much more appealing place to come. For the first time in maybe 30 years, we’re seeing indications that in this generation overall, there is more interest in being more active in your future,” Deacon said. “Students are saying, ‘I want to get in there where the action is.’”

Correction: A previous version of this article said the admissions yield was 50% and that 1,649 students accepted their admissions offer.