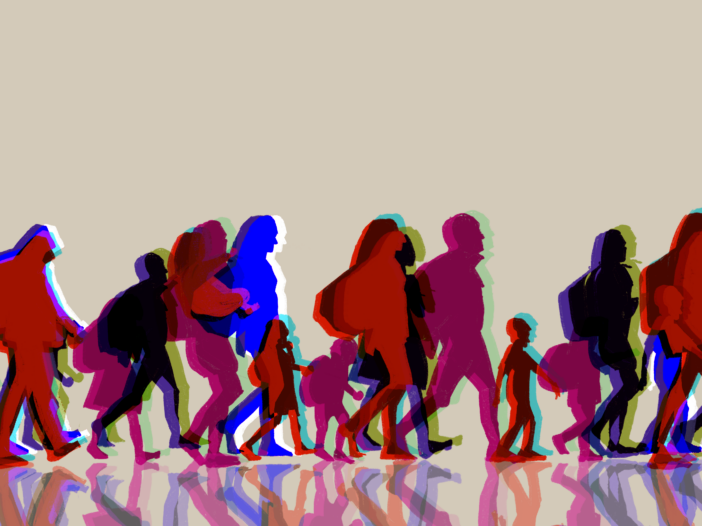 Zahra Wakilzada (SFS ’23) lived in Afghanistan for the first 13 years of her life before moving to Pakistan and then the United States after her family came under threat by the Taliban because of her mother’s work as an activist.

Full disclosure: Zahra Wakilzada previously served on The Hoya’s Editorial Board in Spring 2021.

Prior to immigrating to the U.S, Zahra and her family lived as refugees in Pakistan while the United Nations High Commissioner for Refugees (UNHCR) processed their case. Wakilzada’s family then emigrated to Virginia in 2015.

Wakilzada, who is majoring in international politics (IPOL), said her experience as a refugee has shaped her studies at Georgetown University.

“I really wanted to understand the world, the way the systems operate, and how we as individuals with intersectional identities who are coming from different backgrounds can actually contribute in fixing this world,” Wakilzada told The Hoya.

Wakilzada said her decision to pursue international politics was sparked by the Trump administration’s peace talks with the Taliban in 2020.

“I realized that there was a lack of inclusive voices at the table,” Wakilzada said. “There might be certain issues that will happen in Afghanistan, where like, we as Americans might not be able to see if we have not had experiences like my family’s experience.”

At Georgetown, refugee students like Wakilzada and activists in support of refugee causes have found community, pursued their studies and advocated for refugees on campus and around the world.

While refugee students and immigrants from countries experiencing conflict can pursue higher education and find support at Georgetown, there is room for more inclusion and understanding across campus.

Wakilzada said Hoya Saxa Weekend, a spring admissions event for students from underrepresented backgrounds, had an impact on her decision to attend Georgetown.

“I stayed here for the weekend. I remember the flexibility that these individuals had in order to accommodate me because I was coming late to campus, being in that space, feeling so loved and welcome among these individuals.” Wakilzada said. “Georgetown actually welcomed me by offering me a scholarship as well.”

At Georgetown, Wakilzada took an anthropology class on border imperialism with Denise Brennan, a professor and the chair of the department of anthropology. The class focused on what it means to have borders or abolish them, migrations, refugees and indigenous people’s rights, Wakilzada said.

While this experience was enriching, Wakilzada said other classes have been less sensitive toward her identity and lived experiences.

“In my IPOL classes, my identity has been at the center of the discourse. They always spoke as if there wasn’t an Afghan woman in the class. At times, my professors would ask me why I wear a hijab during office hours.” Wakilzada said. “It is not my responsibility to teach my professors about my identity, or about the way that the system contributes to oppression, I deserve to get as much as any of my peers from this institution, I deserve to learn as much.”

For other students like Nasim Gul Azizi (GRD ’24), coming to the U.S. and Georgetown also meant adjusting to a new education system.

Before Kabul’s collapse to the Taliban in August 2021, Azizi traveled globally for conferences and training programs, aided in the growth of small female-owned businesses and worked extensively in conflict resolution. When the Taliban took over, Azizi and her expertise became a threat.

“Before having to come to the United States for my studies, I wanted to stay in Asia and go to Kazakhstan to get a master’s degree in business administration. Then the situation changed.” Azizi said.

Middle school was especially tumultuous for Ghandehari, who was still learning English, because her peers were ignorant of her identity.

“I had moved around the time the U.S. was having its nuclear deal with Iran, and so having nuclear and terrorism all in the newspaper when talking about Iran did not help with the adjustment,” Ghandehari said.

Ghandehari was uncomfortable with people knowing about her identity until she started college at Fordham University in New York City and surrounded herself with other Middle Eastern students, former asylum seekers and individuals who embraced their cultural roots.

“In high school, I basically started from scratch. I made friends without telling them where I was coming from,” Ghandehari said. “It took me until college to be able to sit and say I’m an Iranian without being uncomfortable.”

Ghandehari transferred to Georgetown to combine this newfound connection with her identity and the political network in Washington, D.C., working on activism about the Middle East, international law and human rights.

Many students, including Ghandehari, strive to support refugees, both with campus-specific causes and broader efforts.

“I saw that young people like myself did not have a space to say what they wanted to advocate for their country,” Ghandehari said. “I decided to come up with an organization and a community that would bring these countries together and just show how much our causes are connected.”

Ghandehari is the co-founder of Middle East Matters, an online community that amplifies the voices of young people who want to advocate for their countries. The organization has received widespread support and has over 200,000 followers on Instagram.

On campus, Ghandehari is also involved with student-led movements, including helping to write a letter with the Iranian Cultural Society (ICS) to call on the university to release a statement in solidarity with the women of Iran as they lead protests against the government.

In September, 22-year-old Mahsa Amini died in custody of Iran’s morality police. Her murder sparked protests for reform throughout the country and developed into a national uprising.

Following the release of the ICS letter, which was addressed to President John J. DeGioia (CAS ’79, GRD ’95), School of Foreign Service (SFS) Dean Joel Hellman issued a response to the violence faced by students at Sharif University of Technology in Tehran, Iran.

“We join other universities around the world in standing with the students, faculty, and staff of Sharif University in support of their struggle and call for all students currently detained or missing to be released safely,” Hellman wrote in the letter. “We add our voice to the many in Iran courageously fighting for equity, justice, and an end to intolerance.”

Besides this, there has still been no public response from the university that addresses the political turmoil as a whole or the brutal murder of Amini.

“Unfortunately, there is selective solidarity at Georgetown University, and it’s extremely alarming because students learn about the causes they should focus on after graduation here. Georgetown was able to respond to Ukraine quickly, and I am so happy they responded that way, but I hope they can extend that support to students from other countries,” Ghandehari said.

Russia began their invasion of Ukraine on Feb. 24. That same day, Hellman invited students in the SFS to a town hall discussion to express solidarity over these tragic events.

Georgetown is aware of the turmoil in Iran, according to a university spokesperson.

“We are deeply concerned and saddened by the recent violent repression of Iranian students and citizens demonstrating for basic freedoms and human rights, and recognize the weight that these events must place on our Iranian-American and Iran-connected students on the Hilltop,” the spokesperson wrote to The Hoya.

As she works towards completing her graduate studies, Azizi is also involved in the Georgetown Institute for Women, Peace and Security (GIWPS), an organization that combines research and advocacy to advance stability and justice worldwide. Azizi recently attended the United Nations’ discussion on the future of women’s education in Afghanistan with GIWPS and the Malala Fund.

“Not only are the girls not receiving education in Afghanistan, but the quality of education is extremely low because all the professional educators are emigrating,” Azizi said.

Azizi came to Georgetown on a scholarship, but she said the visa process poses a huge roadblock for talented Afghan students pursuing higher education.

To broaden higher education access, Azizi said implementing online programs can help eliminate obstacles to education, like getting a visa.

“In Afghanistan, right now, there are not lots of qualified and professional infrastructure at the universities, and the quality of higher education is going down,” Azizi said. “For this reason, some of the universities in the U.S. or other European countries can provide some online platforms, certificate programs, online studies for master’s and undergraduate studies, for students in low- and middle-income countries.”

Zachariah John (SFS ’25), communications and advocacy director of NLG, said the organization is currently working on a large-scale scholarship project in collaboration with George Washington University.

“We’re trying to develop and pilot a scholarship program here at Georgetown, where we hope to bring international or domestic refugee students and house them under a full four-year holistic scholarship and mentorship program,” John told The Hoya. “We’re hoping to bring this idea up to Dean Hellman by the end of the semester.”

Lina Tori Jan, the Afghanistan policy associate at GIWPS, said her upbringing in Afghanistan has shaped her passion for education and advocacy.

“At the time when I was attending school, there was certainly still a lack of access to education for girls, but it was nothing compared to today. My own journey of seeking access to education is what brought me to this other side of the world and where I am today,” Tori Jan told The Hoya.

Tori Jan spent her childhood in Afghanistan but left in pursuit of education when she earned a scholarship to study in the U.S. Having now completed a master’s of public policy from the University of Oxford, Tori Jan advocates for refugee causes and access to education for marginalized communities.

At Georgetown, Tori Jan leads the implementation of Onward for Afghan Women, an initiative of GIWPS dedicated to equipping Afghan female leaders with opportunities to continue their advocacy after evacuating from Afghanistan.

“Onward for Afghan Women is delivering on its mission to ensure these women can continue their advocacy even after the evacuation,” Tori Jan wrote to The Hoya.

While institutes and student-led initiatives like GIWPS and NLG work to make the campus more well-versed in refugee causes and more inclusive for refugee students, some argue there is still room for institutional improvement.

Ghandehari said efforts by the ICS to raise awareness about the political uprisings in Iran were done without support or funding from Georgetown.

“I think, as Middle Easterners at Georgetown, or as Iranians as Palestinians, as Afghans at Georgetown, it is often in our own hands to amplify our communities and make sure people learn about our causes,” Ghandehari said.

Ghandehari and other refugee and asylum-seeker students believe the university can do more to support causes in their home countries.

“There’s a pro-democracy revolution happening in Iran — a country that has been the case study for terrorism and nuclear weapons in the Middle East in all academic institutions. That’s why I want Georgetown to do more. To change the narrative and show that Iran can also be about democracy and freedom,” Ghandehari wrote to The Hoya.