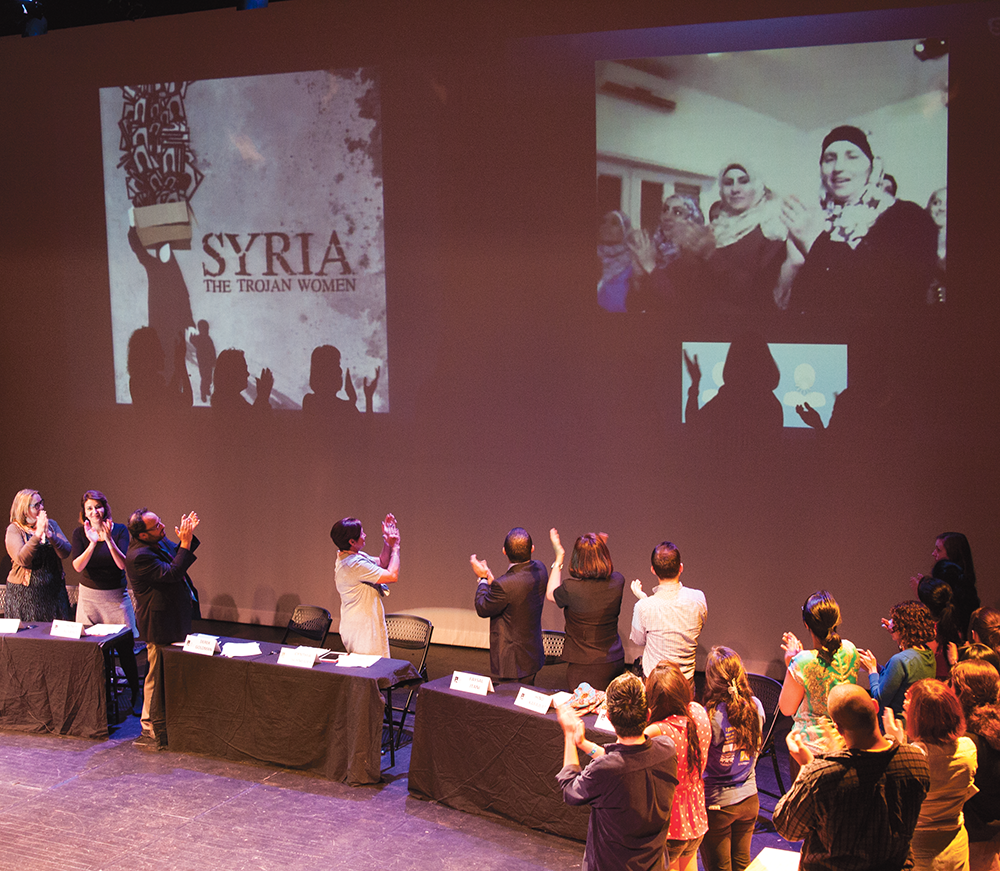 Students, faculty, journalists and performers gathered at the Gonda Theatre on Friday to hear from a group of Syrian refugees via Skype from Amman, Jordan, who had originally planned to perform at Georgetown, but were denied visas by the State Department.

The event, “Voices Unheard — The Syria: Trojan Women Summit” was held by the university’s Laboratory for Global Performance and Politics to connect the local community with the refugees at the center of the “Syria: The Trojan Women” performance originally planned and discuss the issues surrounding their denied efforts to visit the United States.

Instead of the performance of “Syria: The Trojan Women,” an interpretation of Euripides’ “The Trojan Women” incorporating the performers’ own experiences as refugees, the event included a live-stream video chat with the women, behind-the scenes footage from a documentary chronicling the production in the Middle East, and a panel with producers and regional experts.

The women have performed the play in Jordan, which was followed in the documentary “Queens of Syria.” The performance at Georgetown would have been their first performance outside the Middle East.

This “Syria: The Trojan Women” program, based in Amman, provides therapeutic drama workshops for Syrian refugees suffering from depression, post-traumatic stress disorder and anxiety, as well as financial assistance for these urban refugees, a significant number of whom had careers in Syria.

Charlotte Eagar, the play’s co-producer, said that the performance and subsequent documentary helped give a voice to these women, who often go unnoticed in the media.

“The perspective of ordinary Syrian women affected by this conflict and the refugee crisis is so often markedly absent from media coverage,” Eagar said during the summit.“They said they had finally been given the chance to tell their stories to the world. Because when you are a refugee, something terrible has happened. Every single refugee has suffered a dramatic event in their life that would make a Hollywood movie but nobody is listening, nobody wants to hear.”

The theater was completely full Friday evening, with some students sitting on the stage.

These stories, panelists said, give a voice to the crisis.

“It’s those personal narratives that are so significant in really shaping that whole story,” Al-Juburi, a panelist, said. “With any major atrocity, you really need those Anne Franks that are on the ground, those voices that really show what’s happening and help to sort of define the humanity of it all.”

The women themselves, during video chat panel moderated by Syrian journalist and radio personality Honey Al-Sayed, said they saw the performance as a chance to shape how they are perceived. Al-Sayed translated the responses of the women, who spoke in Arabic — with the exception of one who spoke last and in English to a rousing ovation from the packed theater.

“It gave us hope that perhaps we can change the way people perceive us and perceive Syria and especially change for women because women’s voices are so marginalized especially during conflict,” a cast member said.

The women in the video chat said that they were disappointed and saddened that they could not get visas to travel to America to perform. The U.S. Bureau of Consular Affairs in Amman denied the women visas under section 214.B of the Immigrant and Nationality Act, which is failure to demonstrate non-immigrant intent. Switzerland, however, has granted the women visas.

“They were somebody back home and today they feel they are nobody and this incident made them feel that even more,” Al-Sayed said, based on a cast member’s response.

“Syria: The Trojan Women” will be turned into a motion picture set in an unnamed Middle East conflict, featuring an international cast and crew. Eagar hopes that the original performers will serve as the chorus, while other refugees will play the extras.

Some members of the panel discussed the idea that addressing the refugee crisis in Syria could diminish the influence of the Islamic State in Iraq and Syria. Senior Program Officer at the United States Institute of Peace Hind Kabawat told the story of a child named Mustapha who lived in a refugee camp without schooling.

“I couldn’t find Mustapha. Mustapha has been recruited by ISIS because he has nothing to do,” Kabawat said. “How to solve the ISIS problem is also to solve the humanitarian problem in Syria.”

According to some panelists, the refugee crisis is breeding instability in the region.

“Not only is it causing a great deal of human suffering, but it is laying the groundwork for political insecurity and deterioration and that’s very worrying,” said Faysal Itani, a resident fellow at the Rafik Hariri Center for the Middle East and the Atlantic Council.

Kevin Kroyer (COL ’16) attended the event, and said he appreciated how it humanized the crisis.

“It was interesting to get a more human perspective and actually get to interact with the people that were directly affected by it, which I think is a pretty unique experience,” Kroyer said.

Kroyer also said that he found the parallel between the play and the women’s lives interesting.

“I think that’s the cool part of the play, like they were talking about, it was very applicable to the time it was written to the invasion and Milos and the destruction of that city and the fact that it has continued to be this relatable to people over 2,000 years later,” Kroyer said.

The event was the first event of the Lab’s two-year Myriad Voices Festival, which aims to bring together artists, scholars and policymakers to examine the Middle East and North Africa. The Lab is a joint initiative of the Theater and Performance Studies Program and the School of Foreign Service.