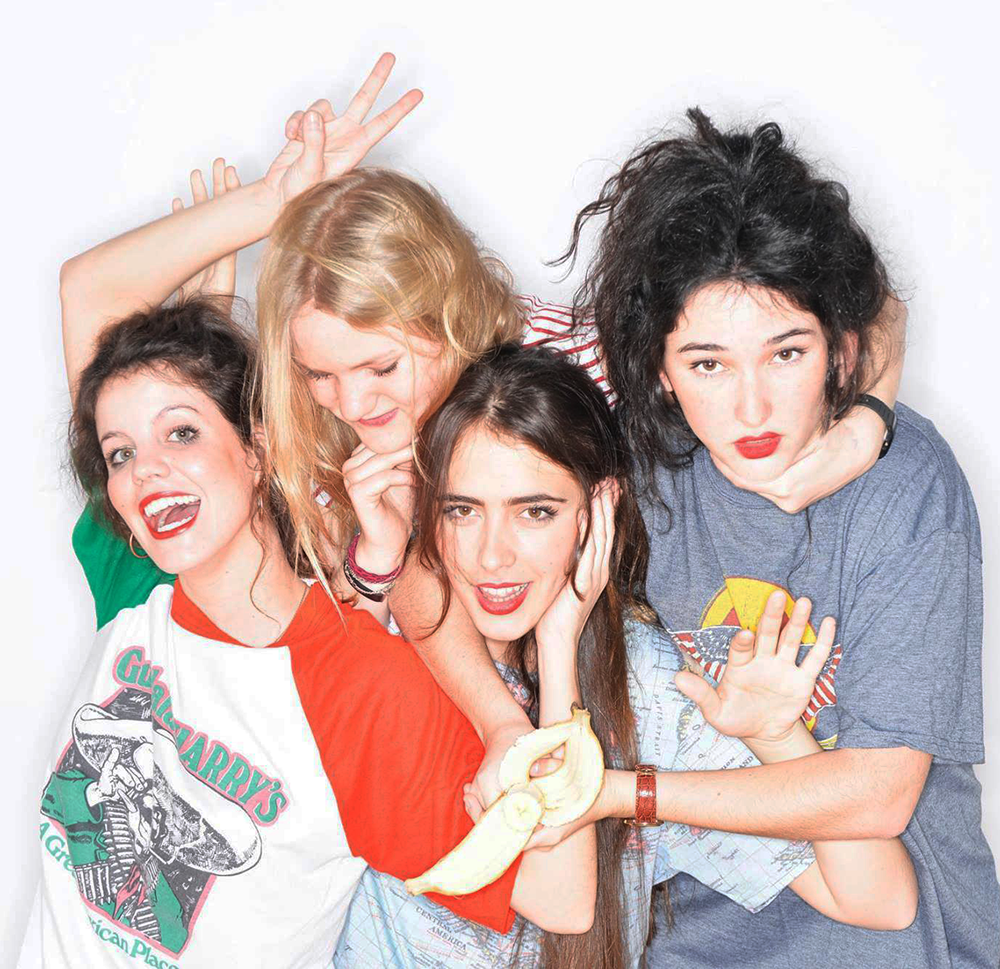 After taking the rock scene in Madrid by storm, Spanish girl group Hinds breaks into the international indie rock market with their long-awaited debut album, “Leave Me Alone.” The quartet, formerly known as Deers, keeps its lo-fi garage rock style endearingly rough around the edges, with frontwomen and founding members Ana Perrote and Carlotta Cosials backed by bassist Ade Martin and drummer Amber Grimbergen. Released Jan. 8, “Leave Me Alone” is a raw depiction of youth and love, and completely deserving of its recent hype.

The album opens with “Garden,” a beachy tune with a rambling electric guitar riff overlaid upon a stolid bass line. The instrumentals are loaded with reverberation as Hinds promises: “’Cause I can take you dancing / use me to feel home.”

The next track, “Warts,” begins with light guitar strums before melting into a catchy guitar line. The sunny guitar and bass play well under the wailing and raucous vocals as Cosials and Perrote sing the lyrics in unison. The album takes a slower turn with “Easy,” a slightly more sober ballad about a failed relationship. The restrained sound persists on “Solar Gap,” a purely instrumental piece full of yearning and heartbreak, giving the listener a peek at Hinds’s greater musical depth.

Hinds amps up the energy for much of the remainder of the album, delivering a feel-good, unflagging indie-rock soundtrack. “Castigadas En El Granero,” which translates to “punished in the barn,” is a contagiously energetic song replete with boisterous guitars, drums and lyrical oddities, such as “All I see is a big cow / I know you heard that and now I’m eating all your corn.” Hinds returns to the surf pop vibes with “Chili Town,” plodding through discordant harmonies to sing about a flirtation in the works: “All I’m asking for is you to make a move.” Next up is “Bamboo,” an ’80s-inspired track with fuzzy, overlapping vocals as Perrote and Cosials sing over the ends of one another’s lines.

The album continues its energetic momentum on the ninth song, “San Diego,” with jangly percussion and bouncy guitar chords, before slowing into “And I Will Send Your Flowers Back,” a gloomy ballad and angsty send-off to a dead relationship.

“I’ll Be Your Man,” the next track, features strumming acoustic guitar and tambourine under a cheerful electric guitar riff. The lyrics subvert gender roles as Perrote and Cosials sing, “I could be your baby, but I’ll be your man.”

“Leave Me Alone” finishes with “Walking Home,” a swaying surf rock track with cutesy lyrics like “Darling, you’re the rice of my bowl” and “Honey, you’re the lime of my coke,” closing the album with a sweet love song.

Hinds, in its rambunctious girl gang style, is reminiscent of other bands like The Runaways or contemporaries like Haim, but differentiates itself in its charmingly ramshackle production and quirky, straightforward writing. True to their garage rock roots, the band possesses a kitschy, lo-fi style that is a refreshing contrast to today’s slickly produced and compressed radio hits. Hinds does not overwork the music, but rather offers up the musical equivalent of a pair of distressed, well-worn jeans: a raw portrayal of young love that feels and fits just right. The imperfections and inconsistencies are what make “Leave Me Alone” so convincing and real as an album, encapsulating and conveying the equal messiness and joyfulness of what it means to be young and in love.

In their debut, Hinds manages to build upon their existing style while also demonstrating potential for growth. Unlike past releases, which were strictly light-hearted and insatiably catchy, the band attempts a more well-balanced album with morose tunes, rather than creating a 12-track party. Far from being flawless, the album feels at times plodding and trudging through the lows, and frenetic and chaotic through the highs. Yet Hinds took the risk of tempering their sun-drenched, bubbly tunes with more reserved songs, showing that they are more than a one-dimensional band.

As evidenced by their album, Hinds isn’t concerned with perfection, in music or in love; rather, in “Leave Me Alone,” the women welcome the listener into a dysfunctional world of gritty honesty, riotous fun and the promise of greatness to come.