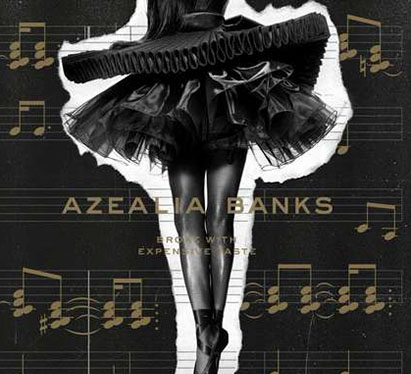 The album was originally scheduled for release way back in 2012, but it was repeatedly pushed back by her record label, Universal Music, which dropped Banks this July after she threatened to start leaking the album with or without their permission.

Then, just a few short days ago, Banks “pulled a Beyoncé — dropping her full album with no press and no questions asked. So now that the album we have waited years for is finally here, how is it?
“Broke with Expensive Taste” is an exciting and fun record that builds upon the hype established in Banks’ first breakout singles. She and her production team have had so much time to rework and refine her tracks that the final 16 tracks are slick, well-executed pieces of musical-production mastery.

Somewhat surprisingly, Banks included not only ‘’Luxury” but also “212,” which dropped all the way back in 2011. You may think that with a two-year delay she may have wanted to record new material to fill the spots of the songs that had already hit the airwaves, but these two tracks are really just great songs that have had more time than the rest of the album to cement her reputation as an MC. Including them in the album means that it will at least have two successful songs to its name (though in reality there will probably be far more than that).

Banks has many musical influences, each of which finds its way into “Broke with Expensive Taste.” Most notable and successful is “Gimme a Chance,” which starts with a funky hip-hop beat but evolves suddenly into a Latin-infused jam, with Banks both singing and rapping in flawless Spanish.
It is an early highlight of an album jam-packed with quality tracks, but the strongest string is yet to come. Halfway through the album, Banks delivers a triple-whammy with “Heavy Metal and Reflective” (one of the album’s singles released earlier this summer), “BBD” and “Ice Princess.” I was particularly drawn to “Heavy Metal and Reflective’s” powerful glitchy-sounding beat that makes me want to hit the dance floor. “BBD” has a similar vibe but is much more down and dirty — picture the difference between a bar dance floor at midnight versus 2 a.m. “Ice Princess” is the song that I’d imagine Elsa from “Frozen” listening to when she goes to the club. It’s fun, it’s fast paced and — like every song on the album — it’s tied together with Banks’ fast, slick rhymes.

Then there’s a song like “Nude Beach a Go-Go,” which seems to come out of nowhere. The track doesn’t have the same feel as any other songs on the album. While this dissimilarity may not necessarily be a bad thing, the peppy 1960s-style tone of the track feels more akin to a laid back Beach Boys album than anything else. On an electro-influenced album complete with Banks’ signature sass, this vibe certainly feels off. That initial jarring distraction makes the last two tracks, “Miss Amor” and “Miss Camaraderie,” fade into the background.

If there was hype about Azealia Banks before “Broke with Expensive Taste,” this album has proven that it was worth the wait. Banks may in fact be one of the most promising female MCs in the rap world today, so step aside Iggy — there’s a new queen bee in town.