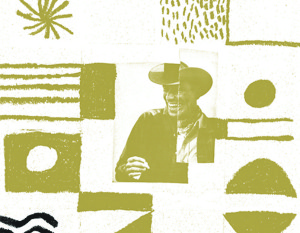 It is hard to pinpoint in which generation the California-based Allah-Las belongs. Though fitting effortlessly into Los Angeles’s modern psychedelic scene, the band draws inspiration from elements of ‘90s grunge and garage rock. In addition, the group has cited the influence of the British invasion and old-school classic rock band. Its third and latest release, “Calico Review,” reflects a successful refinement of the band’s multifaceted sound, as it increasingly hones in on a musical undertone reminiscent of the ‘60s.

Allah-Las introduces listeners to its smooth, sun-dried sound with “Strange Heat,” a mellow track filled with Western twang and low, melancholic vocals. Though not the most memorable track, this opener subtly brings listeners into the dreamy desert context in which the rest of the album seems to unfold.

“Could Be You,” the most popular song of the release, upped the energy of the show. Its retro beach energy is deftly captured in a series of catchy guitar riffs and the quartet’s soft background crooning. Incredibly catchy and summery, “Could Be You” captures the very essence of Allah Las’ renewed sound and vibe. Its whimsical video counterpart is a grainy, black-and-white tour of L.A., reminding viewers just how much the band’s style is influenced by its city. Still, Allah Las manages to deliver an introspective lyrical message about letting go with the lyrics: “But if you had the chance to/Would you do it all again?”

“Warmed Kippers” draws on Allah-Las’ edgier side, interspersing gritty synth tones throughout its signature warbling instrumental arrangement. The resulting sound is perhaps harsher than desired but does present a definitive break from the remainder of the album, which, despite being melodious, runs the risk of lacking individually distinctive tracks.

“Famous Phone Figure,” on the other hand, makes for easier listening. The track is especially reminiscent of The Beatles, with opening lyrics and string instrumentals striking some similarity to the famed ballad “Lucy in the Sky with Diamonds.” Although the song tiptoes into almost lackadaisical territory with its slow, subtle pace, it ultimately reflects the band’s expanded musical scope.

However, the band has succeeded in producing ultra-high fidelity psychedelic rock since its debut on Vinyl in 2011. The band has made slight thematic departures from its first two releases, 2012’s “Allah-Las” and 2014’s “Worship the Sun,” placing a newfound focus on modern relationships, dissatisfaction and finding oneself within the context of a vain, social media-based culture.

In this sense, “Calico Review” marks Allah-Las at its most wistful, both conceptually and musically. The band channels its sweet sentimentality for decades of the past into something of an homage to its musical influences — The Beatles and The Beach Boys — emphasizing the pure sounds of guitar and vocals while paying tribute to its West Coast roots.

Though Allah-Las is definitely exploring its own distinctive medley of genres, The Fresh and Onlys in part parallel its sound, particularly on its 2010 hit “Summer of Love,” which boasts Allah-Las-esque alt-rock undercurrents. The band also shares some commonalities with the Smith Westerns, whose biggest hit “Weekend” has a similar romantic airiness and instrumental background.

Allah-Las is currently touring in Europe before heading to Mexico in late November. Performing at a variety of indie venues, concert halls and bars, the quartet will be joined by emerging band Reverberation at a few of its performances. Reverberation’s spunky sound, filled with heavy beats and plucky guitar, will definitely complement the breezy atmosphere of an Allah-Las show.

Though it does not have as many standout songs as the band’s previous albums, the selection of catchier tracks on “Calico Review” is a definite must-listen for fans of psychedelic rock. The band succeeds in reviving a warmer ‘60s sound while continuing to combine different musical influences, producing the ideal album for a lazy summer road trip.