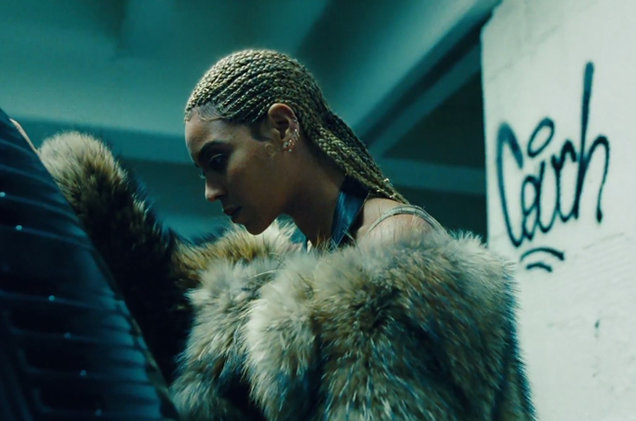 Beyoncé premiered her sixth solo album on HBO Saturday – but calling it an “album” is a gross understatement. “Lemonade” is a visual masterpiece that redefines what it means to be an artist, swiftly dismissing anyone who doubts that she is the reigning queen of the music industry. In just over an hour, Beyoncé manages to take her audience on a full emotional journey that achieves what her first crack at a visual album just could not. Instead of the series of music videos strung together that was 2013’s “Beyoncé,” the cohesive story Beyoncé is able to tell more in the movie form than is possible simply through audio makes it almost operatic. Combining music, poetry and film, Beyoncé manages to offer a celebration of the strength and resiliency of black womanhood, all through the lens of her most raw and heartbreaking reality.

The theatrics of “Lemonade” are made quite literal from the first sight of Beyoncé on stage in front of a red curtain, singing about suspicions of an unfaithful Jay Z. It is a devastating opening line: “You can taste the dishonesty.” And from there she essentially confirms those cheating rumors that have plagued the seemingly perfect couple since that infamous May 2014 elevator incident. Coming from such a private artist – her first interview in over three years appears in this month’s Elle Magazine – the honesty is shocking.

Over the next hour, Beyoncé takes control of the narrative that has been speculated on in tabloids for years with blunt frankness. The rest of the work tells this story through 11 themes: intuition, denial, anger, apathy, emptiness, accountability, reformation, forgiveness, resurrection, hope and redemption. The key to this visual album’s success is its commitment to this arc, with the 11 themes serving as acts of the mini play Beyoncé has crafted, as the songs from the audio album are woven throughout. In between acts, Beyoncé speaks in poetry not heard on the audio album, further connecting the music into one continuous ride.

The range of styles Beyoncé is able to incorporate in just one hour is ambitious, with R&B, rock and country styles all integrated. The credits roll for several minutes, with Beyoncé pushing herself in working with producers from all sides of the industry, including Diplo, Ezra Koenig and Mike Will Made It to name a few. Jack White, The Weeknd, James Blake and Kendrick Lamar all lend their vocals to different tracks, ensuring that the range of emotional responses Beyoncé aims to convey in the story of her husband’s infidelity are reflected in a diversity of musicianship that her previous works do not come close to matching

Following the tragic feel to the album’s exposition, the first half of the work details the height of marital tensions. The reggae-infused “Hold Up” is Beyoncé at her sassiest, with a breezy chorus and what have already become iconic images of her gleefully smashing car windows with a baseball bat. Her fury only escalates through this portion of the story, with Jack White’s rock influence reinforcing the dissonance of “Don’t Hurt Yourself.”

Audio clips of Malcolm X saying, “The most disrespected person in America is the black woman,” bring Beyoncé’s narrative into a relatable context for the first time. It reminds the audience that although she is arguably the most famous celebrity on the planet, her story is one of the black female struggle against a misogynistic and patriarchal society.

Her frustrations hit a high in the effortlessly catchy “Sorry,” which serves as this album’s standout female sing-a-long, don’t-need-a-man anthem. Tennis icon Serena Williams dances around Beyoncé throughout the video, as the artist poses on a throne in the same commanding position Williams did for her Sports Illustrated 2015 Sportsperson of the Year cover. It is the ultimate celebration of black sisterhood and a message that these women are not ones who will be disrespected. The infectious chorus that chants “Tell him, ‘Boy, bye!’” which Williams sings along with, will likely be this era’s “to the left, to the left.”

Just when “Lemonade” seems to be a Carter divorce announcement, hints of reconciliation shine through at the end of “6 Inch” featuring the Weeknd, as a breathless Beyoncé shifts from anger to sadness and pleads, “come back …” It is a sense of vulnerability reminiscent of the opening scenes of Beyoncé on the stage, and a turning point in the album towards a portion of self-reflection and homage to her roots. Allusions to her parents’ failed marriage and tumultuous relationship with her father momentarily shift the focus away from Jay Z, and bring her Texas upbringing into focus. “Daddy Lessons” is the most stylistically unique track on the album as a definitive country song, playing up the Southern gothic visuals that encompass the film. It is intended to remind the audience that she is a typical girl from Houston at heart, and this could be a story of countless Southern black women, even if Beyoncé herself is crooning in couture the whole time.

The second half of the album is where the emotions of “Lemonade” really develop, with the most vocally impressive moment in “Sandcastles,” a tearjerker of a ballad that showcases Beyoncé’s pure talent. Jay Z appears in this visual accompaniment – another surprising cameo, especially given the volatility of the album’s previous songs. It is a testament to Beyoncé’s command for respect from both her husband and from her audience that they accept how she chose to deal with his infidelity, further cementing the theme of the album – this is her story, her emotions and she will tell it her way.

The most poignant moment of the album, however, comes in its shortest. “Forward,” a minute-long James Blake collaboration that features the mothers of both Trayvon Martin and Eric Garner holding up portraits of their deceased children is breathtaking. It is less of a political statement regarding police brutality than it is a tribute to the women behind these tragedies. It is another reminder of the strife of the neglected black woman in America and points yet again to how this album is about far more than Beyoncé’s marriage and tabloid fodder.

In “Freedom,” the climax of the work, Beyoncé is belting alongside an army of black women, showing the sheer might and brilliance of their sisterhood. Building upon the earlier cameos from Serena Williams and brave mothers, famous faces such as Zendaya, Winnie Harlow, Quvenzhané Wallis and her daughter Blue Ivy Carter join Beyoncé for this anthem of black female power. “I break chains all by myself / Won’t let my freedom rot in hell,” Beyoncé belts, answering Malcolm X’s concerns that were heard earlier in the film. For the first time in her career, Beyoncé is identifying not just as a feminist, but also, more specifically, as a proud black woman.

Her personal story comes to somewhat of a resolution in “All Night,” a promise that the couple is rebuilding their relationship and hopeful to emerge stronger in love than before. Home movies of their wedding, newlywed years and birth of Blue Ivy cast an optimistic tone and seem to confirm that their love will survive this era of their relationship. Triumphant horns and strings bring their struggle to an end, at least for now. “With every tear came redemption / And my torturer became my remedy,” Beyoncé sings, bringing the roller coaster of the album full circle before the rousing “Formation” finale.

“Lemonade” is the ultimate expression of agency and manifestation of the level of autonomy Beyoncé has been able to achieve over her storied career. In contrast to the impulsive and haphazard release of 2016’s other highly anticipated album, Kanye West’s “The Life of Pablo,” Beyoncé demonstrates a preference to be the master of her own narrative. While West fueled popular gossip with explicit lyrics such as those about Taylor Swift, Beyoncé tactfully addresses public interest with a full and carefully crafted story that in itself is art. Yes, questions of who “Becky with the good hair,” is will probably fill tabloids for months, but Beyoncé is done answering questions for now. The famously private star may likely retreat again, leaving us to digest “Lemonade” for years to come.

It builds on the magic of her surprise drop of “Beyoncé” in 2013 – her first visual album – by exponentially raising the standards of what can be attained by releasing music and video together. She challenged her peers in 2013 to rethink the nature of album releases, and in 2016, she has pushed the boundaries of the music industry even more. While it may seem she’s hit a career peak, as she asserts on this album, “Imma keep running ’cause a winner don’t quit on themselves.” It’s just a matter of time before Beyoncé stops the world again.