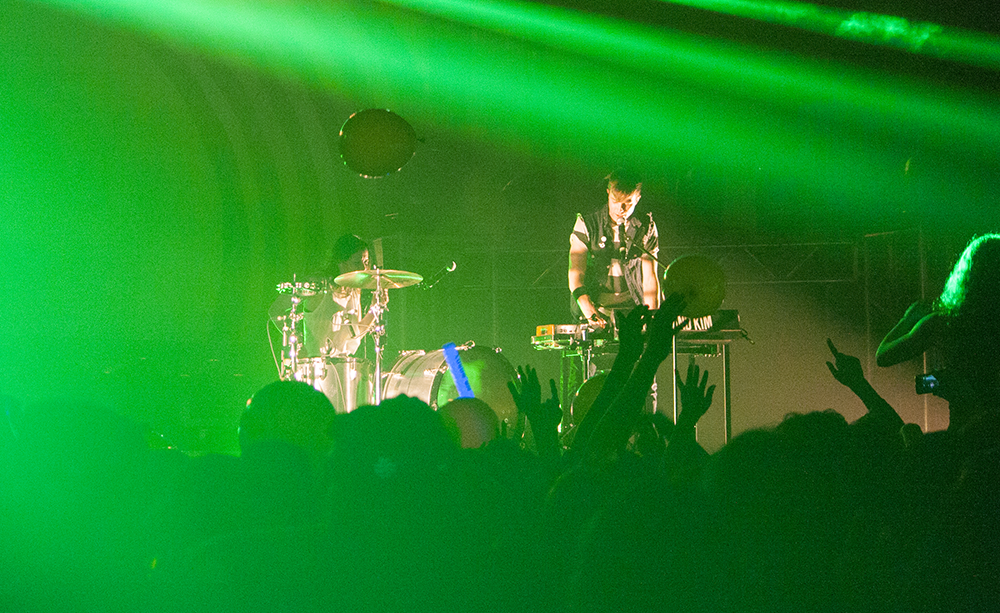 The April 7 release of Matt & Kim’s new album, “New Glow,” coincided almost perfectly with their performance at Georgetown’s spring concert last weekend. Although the album starts off as a one-level generic collection of similar techno beats and repeated lyrics, the sound evolves as the album progresses into deeply entertaining and sincere tracks that that reveal the Brooklyn duo’s musical maturity.

The first half of the album sounds uncannily familiar, with each song using the same beats and lyrics that tell the same story over and over again. The first song, “Hey Now,” introduces the listener to Matt & Kim’s free-spirited world of parties and romance, relying on cymbals and a fluttering butterfly beat that make it sound almost like a high school marching band’s love song. While the energy is there, the song feels forced, and the instrumental combination is not able to add much.

A later track titled “Can You Blame Me,” colorful and full of life, is definitely liable to get stuck in your head, but it is just too similar to the others preceding it to make it especially memorable. There is a great overall theme of enjoying life and letting yourself experience every moment, an idea most Georgetown students should be inspired by every once in a while, but the sincerity of the music is confined in a superficial dance music genre that doesn’t translate well over lyrics.

“Hoodie On” is much more techno and out of the box, and for the first time Matt’s voice perfectly harnesses the amused mood behind the lyrics.  While it still isn’t a moving enough track to propel the rest of the album out of mediocrity, it is a nice change in beat and carries on the message of living life how you want to.

The track is followed by “Make a Mess,” an incredibly short yet powerful anthem about letting go and partying it up, which focuses on the idea of deviating from the confines of society and enjoying yourself. As with most of the prior songs, there is still very little emotional depth featured in the writing.

“Killin’ Me” is strangely upbeat for its title as it too relies on a strong dance music impulse to carry it forward. While the lyrics are trying to switch it up from the almost kitschy party songs that make up the first half of the album, it still lacks emotional complexity or richness.

The album does a 180-degree turn with “The World Is Ending.” This song is enchanting and haunting, and the synth beat and auto-tuned voices add to this sense of urgency. The music is just as catchy, and it is able to keep its pumping beat while still coming off as matured and evolved. There is a musical vibe to this song that the others lack, and its lyrics are beautiful with lines such as, “There are so many fish in the sea / But only a few that really know me now.”

This song takes the previously restricted message of the album to an entirely new height, and the picture it paints of running away together from this world is both liberating and inspiring.

Similarly, “Not Alone” finally taps into an emotional depth that makes it possible for the listener to feel more personally connected to the duo, which other tracks failed to do. A sweet and touching song with lighter upbeat notes, it surpasses the previous party anthems and becomes both comforting and empowering, putting faith in human relationships and elevating the entire album to a new and more focused level.

The closing track on the album, “I See Ya,” ends on a high note. It starts out differently than the rest of the album, slower and more subdued, with an almost ballad-like quality to it. The music makes it feel old-world, like watching a homemade love story on a Super 8 camera, and it comes off as the most genuine in a line of songs that stick to the usual indie dance rhythms. After the fun and loud push of the rest of the album, it closes on an intimate note with a message that while life is not always a party, it can always be sweet.

There is definitely redemption to be found on Matt and Kim’s album “New Glow” as it transitions from just another dance party playlist to an inspiring and motivating story of hope, growth and potential.  Slow at the start but going out with a bang, the album is worth its price.