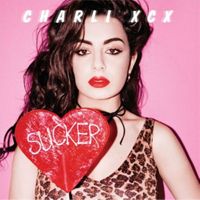 Charli XCX’s new album “Sucker” is a party in itself, filled to the brim with wild sounds and a thriving beat reminiscent of the disco era, but at times it just feels like the same song is on repeat. While the tracks are colorful, ranging from a pouty voice to sassy lyrics  that appeal to everything from a divine power to a broken relationship, it’s the same colors used over and over again to create less of a journey and more of a moment.

The album  charts Charli XCX’s relationships with people, places and  experiences, and runs unrestrained between reality and her own fantasies. Although the lyrics are often difficult to decipher beneath the pounding bass and ringing music, the words are poetically strung together and pull the listener into a surprisingly deep and meaningful world of crazy love and hate.

“Gold Coins” is a song that captures both the rawness and eloquence of the high life through a storm of hallucinations, but fantastic beats snap the listener back to the real world. It’s almost a ballad in its own right, and Charlie XCX is not shy about admitting her daydreams.

The album’s highlight song “Doing It,” however, is nestled in the middle of it all, a sexy duet between Charlie XCX and Rita Ora, and advocates for living in the moment and never coming down. Rita Ora, another British singer and songwriter, has a sweet, yet heavy voice that matches Charli XCX’s high staccato pitches perfectly and gives a new sound to the carefree and reckless attitude of the tracks. There’s a teasing quality between the two women’s voices that adds flare and spunk to the song and shakes up the flow of the album for the better.

Of course, the album also features “Boom Clap” and “Break the Rules,” two of Charli XCX’s most popular singles, and understandably so. There’s something about the energy of these two songs that help lift the rest of the tracks onto the dance floor; you can almost hear how much the singer herself loves these songs. While they still keep in line with the repetitive sound of the rest of the album, “Boom Clap” and “Break the Rules” manage to flow better in terms of sound and create an unmatched spark.

While the album’s non-apologetic attitude towards life and love does give it a refreshing buzz, there is a sense of running around the same track again and again, the lyrics slightly different and a few notes subtly changed. The fun free spirit of the music fades into the same shade and sound, making the album almost nostalgic for the cool swinging years of discotheque, dance clubs, and leopard-print parties that it can’t quite reproduce. However, if someone is seeking an album for a good time, one that doesn’t require anyone’s full attention to get the most out of its good vibes, “Sucker” is one that can play all night.